If Gabriel DropOut is any indication, the NEET lifestyle is better than heaven 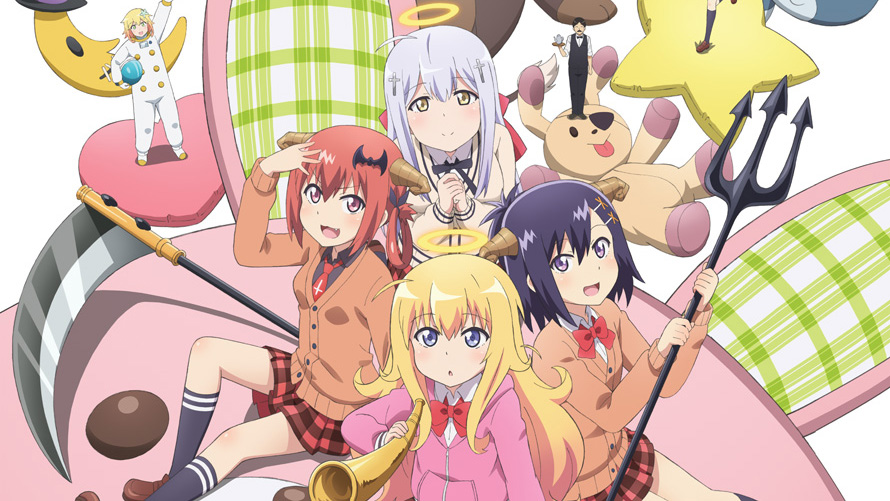 Angels We Have Heard (In High School)

If angels had to work hard to learn their craft, even learning among regular students in the human world, things would be pretty wacky. That’s the premise of Gabriel DropOut, which follows Gabriel, the angel who’s gotten the best grades and had the most impressive accomplishments in her graduating class. She’s sent to Earth to learn more about humanity, setting up an apartment and time at school and the community.

If it sounds like Gabriel herself is a stand-up angel, she’s actually not. In fact, several of the angels are pretty terrible at their jobs. Gabriel has been picking up some awful habits while living with humans, gravitating toward online gaming and bullying others. What turns out to be hilarious for viewers isn’t a good sign for Gabriel, however. If she underperforms she’s in danger of being sent back to her celestial home. It’s a zany, madcap show with plenty of jokes to keep folks entertained, and if you’re into shows like Lucky Star, you’ll feel right at home with Gabriel DropOut.

Tenma Gabriel White is an intriguing character from the very start of Gabriel DropOut, especially when you look at how far she’s fallen. Previously the top of all the angels in her class, she’s devolved into a rude hikkikomori type who can’t even be bothered to keep her apartment clean. She prefers blackout curtains to keep the sun out and loves marathon gaming with MMOs and anime series, just like a certain other shut-in we know—Tomoko, anyone?

Gabriel is bewitched into becoming basically useless by way of a free-to-play game that traps her in its ugly grip, as she slowly descends into NEET-like madness. From then on, she’s little more than a lowly “gamer,” or the way some media portray them. It’s hilarious, especially because she was such an overachiever at first and reliable in so many ways. The first few episodes set up this premise in ways that’ll have your sides bursting, especially since there are so many problems with the way these so-called angels (and their demonic counterparts) interact with each other and the human world. Gabriel is joined by Raphael, a sadistic angel (that may not sound like it makes sense, but apparently such characters exist), which makes for some funny (if uncomfortable) situations.

A lot of the comedy comes from the demonic characters who really steal the show. Vigne, for example, is a demon who can’t truly comprehend what it means to be evil and ends up being a better angel than even Gabriel herself. In contrast, Satania is just too stupid to do evil things. They’re a ridiculously motley crew and none of the things they do really make sense when you think of their actions in the context of “angels are doing this,” but that’s what makes Gabriel DropOut work. These are supposedly heavenly beings (and some from a not-so-heavenly place, too).

Our Characters, Who Art From Heaven

The type of mischief our heroines get into is hard to be believed sometimes, especially one of the episodes where the angels attempt to play pranks on each other and try cooking, which is obviously not their forte. The girls also try interacting with humans, which doesn’t always end well. You often wonder how it is, exactly, that they’re able to pull off living in the human world when they’re so bad at doing it in the first place.

The girls act very much like a comedy troupe, pulled straight from a four-panel manga like Azumanga Daioh or other similar series, so if you’re used to slapstick comedy or if that’s something you’re interested in looking into, you’ll find plenty to love here during their interactions. Satania simply can’t ever get “bad” to save her life, and the rest of the characters all do their best to keep the general public from discovering their true identities. The way some of them act, that’s probably going to be a tall order.

However, these are all characters you’ll delight seeing interact, especially when you get into the later parts of the anime series and dig into the show a little further. There’s an overarching narrative beyond the comedy and that’s why you’ll come for the laughs but stay for the rest of the storyline that unfolds behind the silliness.

Sleep All Day, Party All Night

Gabriel DropOut is one of several anime series to deal with the concept of a “NEET,” which means “not in education, employment, or training.” It’s a common reference to a young person who, at least as depicted in anime, sits at home all day and plays games, watches anime, and basically contributes nothing to society. It’s a derisive term through and through—not something you want to call someone in polite conversation. The very idea that an angel, once charged with helping improve humanity and assisting in any way possible, would devolve into someone with no regard for improving the world is laughable, and that’s why this idea works so well in the series.

This isn’t the first series to explore an idea like this or even characters with similar motivations. What makes Gabriel DropOut stand out is obviously the fact that these are divine beings who are meant to be making a difference essentially playing about and toying with their time on Earth in Gabriel’s case, rather than learning and trying to make the world a better place. It’s played off well, and that’s the main joke throughout the show, but sometimes you’ll wonder what can even be done about it all in the end.

Cuteness Wins Out Over All

Gabriel DropOut is going to end up being one of the guilty pleasure shows you pop in when you’re sick to see what the girls are up to because it’s so silly you can’t stand it. It’s going to be that show you’re into because it goes there and isn’t afraid to make religious jokes even though it should, by all intents and purposes, be inappropriate to do so.

If you’re a fan of the typical “cute girls doing cute things” series out there (and we know there are a metric ton of them by now) you’ll find plenty to love here, especially when Gabriel herself turns into a literal trash character and faffs about in ways only characters like Tomoko and Konata have done before her. Come in, stay a while, and if you’re religious, you might pray for a better angel than Gabriel to come and do a good deed for you.

Gabriel DropOut is currently available to stream on Crunchyroll.