The hero of Frau Faust is Johanna Faust, the legendary sorceress who sold her soul to the devil. After 100 years her story became a fairy tale, and—through repeated retellings—she became a he. When a boy named Marion crosses paths with Johanna, she agrees to teach him magic in exchange for a favor: admittance to the local church on the night of the new moon. Inside the church is a piece of Faust’s demon, Mephistopheles. However, Johanna is being pursued by Vito and Lorenzo, two priests who have been sent by the Church to prevent Johanna from putting Mephistopheles back together. 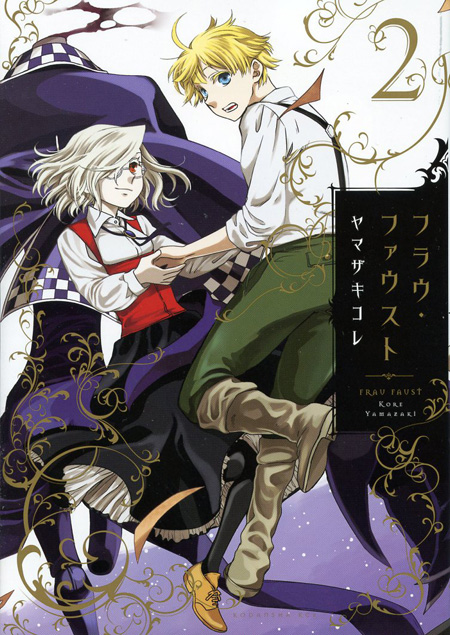 Frau Faust is from the same creator as The Ancient Magus’ Bride, and like all of Yamazaki’s work, it’s steeped in well-researched history, legend, and imagination. The characters are fascinating and each hide their own secrets. The art, the German references, and the foreboding sense of magic gone wrong draw an immediate comparison to Fullmetal Alchemist, but here, it’s the mystery of the characters themselves that pulls the reader into the story. Yamazaki hints at Faust’s past through dream sequences that provide glimpses of her life with Mephistopheles. And the demon itself presents another enigma: does Faust really want to destroy him, as she claims? Or are her feelings more complicated? The elegant crafting of the story promises many more mysteries to come.

While Yamazaki’s storycraft is as stellar as usual, the art of Frau Faust lacks some of the opulence of her first series. Gone are the lushly detailed backgrounds from The Ancient Magus’ Bride, replaced with screentone trees and generic European towns. The costumes are simple and uninspiring, and even the character designs seem plainer than usual. Marion, the young scholar, is the blandest character in the book, possibly a stand-in for the reader; at least in Volume 1, his most outstanding quality is his name.

Despite the art complaints, Frau Faust is a fast read because it is such a good read. Yamazaki’s storytelling is in fine form even if the art is a bit skimpy. Perhaps it’s just a sophomore slump, perhaps it’s tighter deadlines. Either way it doesn’t matter, Yamazaki is a first-class author. Volume 1 also includes a fascinating short story, “The Invisible Museum.” Recommended

If Gabriel DropOut is any indication, the NEET lifestyle is better than heaven
[Review] The Big O: Complete Collection