From Up on Poppy Hill Anime Film’s English Dub Debuts 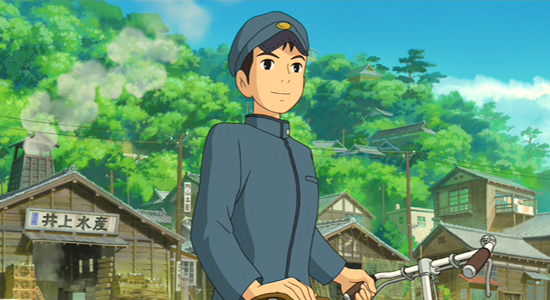 From Up on Poppy Hill is Studio Ghibli’s latest feature and the highest grossing box office hit in Japan in 2011. It’s the second film directed by Goro Miyazaki (Tales From Earthsea), son of Hayao Miyazaki, and it was shown in the U.S. in March 2013 at the New York International Children’s Film Festival in an English-dubbed version that opened theatrically in New York on March 15, right after the festival. It’s a period drama set in Yokohama, Japan, in 1963 and deals with a pair of high-achieving high school students and their budding romance, set against a backdrop of changes imposed by the impending Tokyo Olympics of 1964. The characters designed by Katsuya Kondo—in the patented Ghibli house style—offer up a lively group of personality types, including a solid and reliable teen girl at the heart of it, a wise and benevolent matriarch, various professional women, working-class men, industrious students, and a rich and powerful man to whom a climactic appeal for help is made, to cite just a few in the large cast. The detailed backgrounds capture a seaport city caught between pre-war shops and traditional homes and a tidal wave of modernization and renovation poised to alter the whole landscape. It’s a lovely work of animation to admire from start to finish, even when the drama lags. 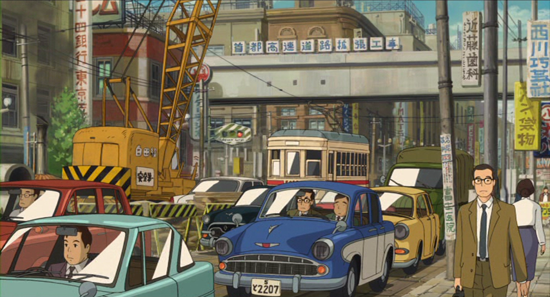 When we first meet Umi (voiced by Sarah Bolger), a high school junior, she is busily preparing breakfast for a household full of women—her grandmother, three boarders, a younger sister—and one male, her younger brother. Umi’s father, a ship captain, was lost at sea during the Korean War and her mother, a doctoral student, is studying in America. As the eldest child of the immediate family, it’s Umi’s job to prepare the meals and we get to see the intricate details of this responsibility in several scenes, including trips to the market, frying fish, retrieving vegetables from a storage area under the floor, and measuring rice for the cooker. Umi also starts out each day by hoisting sea flags which can be seen by passing ships and tugboats in Yokohama Harbor. One of those tugs carries Shun (voiced by Anton Yelchin), a high school classmate of Umi, who notices the flags and writes about them in the student newspaper he edits. 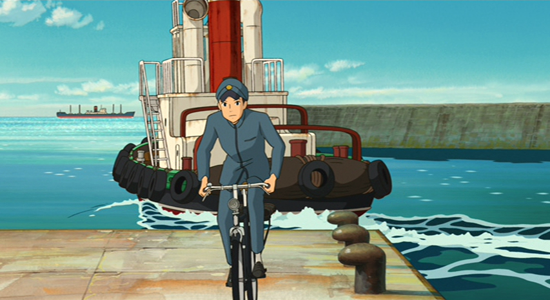 The plot is mostly centered on attempts by the high school students to prevent their beloved old clubhouse, a ramshackle Victorian structure affectionately known as the “Latin Quarter,” from being demolished by the school administrators. The building houses all the school clubs (astronomy, archaeology, chemistry, philosophy, etc.) and is pretty much an all-male enclave. When Umi gets her first look at the place and begins her friendship with Shun, she decides to recruit her friends to start a massive campaign to clean the clubhouse and spruce it up with a paint job and necessary repairs. This by itself doesn’t yield much of a compelling narrative, so an important subplot is added involving a family secret that connects both Shun and Umi and could derail their romance before it even begins. The problems created by the revelation of this secret are never treated quite as dramatically as they ought to be, which means we don’t get the highs and lows that would normally result from such a development. One tear-filled scene late in the film finally offers the reaction we needed to see, but it’s not enough to stir up the emotions we normally feel in Ghibli films. 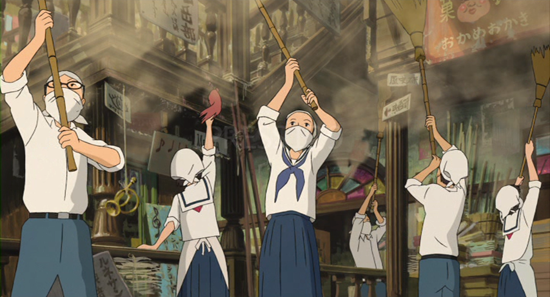 The fact that Tokyo is preparing for the upcoming 1964 Olympics plays a part in the film’s background, but not enough to make this the historic chronicle that a live-action film actually made in 1963 might have provided. The hosting of the Olympics was, of course, a big deal in Japan, the equivalent of a “coming-out party” for a country that had finally begun to emerge from the ashes of World War II as a prosperous, industrial nation eager to become a major player in the world economy. This would be perfectly evident to most Japanese watching this film, but maybe not so much to Americans, since it’s never spelled out quite as explicitly as we need, although it is touched on in one very lively scene in which the students have an impassioned debate over the future of the clubhouse, with the majority seeming to favor its demolition to pave the way for the bright future promised by the Olympics while Shun and his cohort fiercely defend the school’s traditions and culture. I’m curious to see an actual live-action Japanese film from 1963-64 that features the preparations for the Olympics, even if only in the background and preferably in color and widescreen, just so I could see what it looked like on the ground for the residents most affected. I’m not sure such a film exists, but I have seen Kon Ichikawa’s epic documentary record, Tokyo Olympiad (1965), which focuses almost exclusively on the athletic events themselves and not on the social or cultural context. I’ve seen plenty of other Japanese films from 1963-64 but they’ve tended to be samurai dramas like 13 Assassins and Chushingura and science fiction/monster movies like King Kong vs. Godzilla and Atragon, none of which, alas, addressed the Olympics. 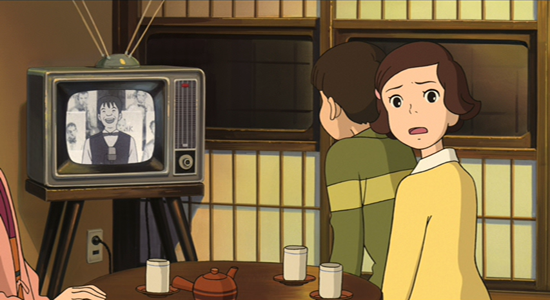 I watched From Up On Poppy Hill first in its Japanese-language version (with English subtitles) before attending a screening of the English dub. There are numerous Japanese songs on the soundtrack, some newly created and one dating back to the period of the film. That song is “Ue o Muite Arukou” (I Look Up When I Walk), performed by Kyu Sakamoto, which was a big hit in 1963 and is heard twice in the film, including once on a black-and-white TV set watched by the family as an animated rendition of Mr. Sakamoto is seen performing. This song is notable as the first of only two Japanese recordings to ever reach the Top 40 in the U.S., where it was known, rather indelicately, as “Sukiyaki.” (The other song was “Kiss in the Dark,” 1979, by Pink Lady.) In addition to new songs created for the film and sung on the soundtrack by Aoi Teshima, there are two traditional group songs sung by the students at the school, one at the aforementioned debate over the future of the clubhouse and one at the clubhouse itself when the students greet the chairman of the school’s board, a foundation director who will decide the fate of the clubhouse. In the English dub, most of the songs are happily left intact on the soundtrack while the two group songs are sung in an English translation of their original lyrics with the original melodies, adhering to both the spirit and letter of the original in as best a way, I suppose, as could be managed under the circumstances.

The English voice cast is led by Sarah Bolger, as Umi, and Anton Yelchin, as Shun. Ms. Bolger is an Irish actress known to TV audiences for “The Tudors” and “Once Upon a Time” and performs here with an American accent. She has some highly emotional moments and she handles them quite well. She deserves some of the credit for the overall success of the dub. Yelchin, best known for playing Ensign Chekov in J.J. Abrams’ Star Trek reboot, captures the spirit of his character but had too deep and raspy a voice for my tastes. Other characters are played by a wide mix of veteran Hollywood actors, including Jamie Lee Curtis as Umi’s mother, Chris Noth as Shun’s father, Gillian Anderson and Christina Hendricks as two of the boarders, and Bruce Dern as a sea captain friend of Umi’s late father. 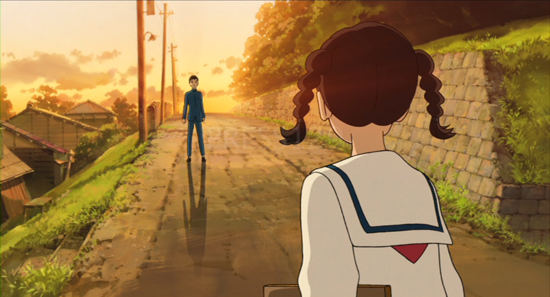 It’s a gentle, sweet tale that is never less than pleasant to watch but is also never terribly engaging. It has the same low-key approach to drama that characterized director Miyazaki’s previous film, Tales from Earthsea (2006), although the protagonists here are much more interesting than the dullards featured in the earlier film and the script (co-written by Miyazaki’s famous father) is a lot better. While I like the careful work done on the English dub and applaud the efforts of its director, Gary Rydstrom, I would still urge fans to seek out the Japanese original, chiefly because the group songs have a much more powerful effect when sung in their original Japanese and because it’s set at such a crucial time in Japan’s postwar development that we need to hear the characters speak in Japanese. It’s not the most child-friendly tale, given its preponderance of drama and the lack of action or fantasy, and is best suited for adolescents and teens who are already anime fans and predisposed to have an interest in the subject and setting and would welcome subtitles.

GKids is rolling out From Up on Poppy Hill in LA on March 22, with 13 other cities to follow on March 29, and even more throughout April and May. Head to the official site for play dates in the United States and Canada.