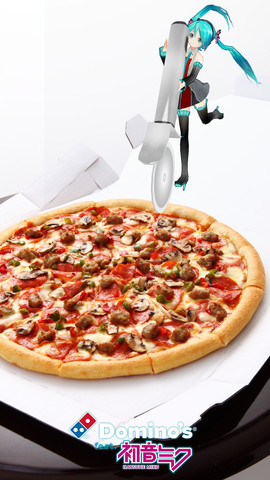 On March 7, Japanese Domino’s Pizza franchises began a collaboration with Vocaloid sensation Hatsune Miku, packaging medium and large pizzas in Miku-themed boxes, and delivering them in Miku-themed motor scooters with Miku-themed delivery persons (sources inform us these are colloquially known as “cosplayers”).

Only four short days after the promotion began, Domino’s broke the news via their Twitter account that demand for the pizza boxes had exceeded sales projections. That’s good! So much so they had sold out of them completely. That’s bad!

Domino’s hastily announced an increase in production, but due to the overwhelming, all-consuming Miku-mania driving demand, they will be unable to continue the offer until May as originally planned, ending it as soon as they sell out of the next run of boxes. Think about that for a minute. 2 months of pizza boxes sold out in less than a week.

Thankfully, readers around the world can still view this amazing youtube video Domino’s prepared to sell the concept to Japanese customers, featuring Domino’s Japan president Scott Oelkers. It’s hard to imagine how much bigger the next one of these things might be.

This story originally ran in the 3/19/13 issue of the Otaku USA e-News newsletter. If you’re not on the mailing list, then you’re reading it late! Click here to join.