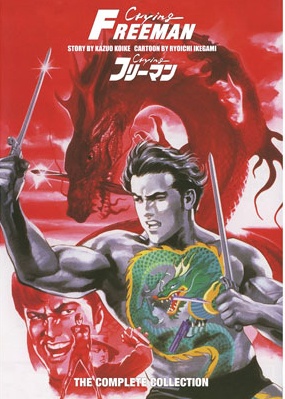 Based on the manga by the renowned duo of Kazuo Koike and Ryoichi Ikegami, Crying Freeman deals with Yō Hinomura, a pottery artist who accidentally stumbles onto evidence of a series of murders by a Chinese crime syndicate called the 108 Dragons. Instead of killing him, they kidnap and imprison him, and force him to become their assassin. Through an arcane series of acupuncture procedures, they force certain killing instincts into his subconscious, which he absolutely cannot disobey. After an intense training period, he winds up being so good at killing he becomes the Dragons’ premier assassin, code named ‘Crying Freeman’ because he cries after each assassination; he requires the emotional release, since he can never be free of this organization or lifestyle.

He tells all of this to a woman named Emu Hino, who’s witnessed his killings on 2 occasions and has developed a more-than-passing interest, leading her to create a painting of him. Freeman is sent to kill her, but can’t quite bring himself to do so. Matters get even more complicated when Emu gives him her virginity so she won’t die without knowing love, but a Yakuza gang called The Hakushin Group (assisted by police who don’t want the Dragons coming into Japan) attack the couple and Emu is injured. Freeman (with his friend Koh) decides to eliminate The Hakushin and, after a thorough beating by his superior, grab Emu from the local hospital to eventually make her his wife. Over time, she and Freeman become the leaders of the 108 Dragons and run the organization, which controls many aspects of organized crime throughout Asia.

You know, some of the stuff I’ve mentioned here has the makings of a decent crime story, but eventually Crying Freeman devolves into a total mess. There are so many times where I can’t tell what Yō’s motivation is—you have a guy who initially talks of living as an artist and being free of this life, but instead jumps from one adventure to the next with little to no mention of his former life. Over the course of the series, I was hoping to see some development of Yō’s character, but that pretty much stops after the second OVA, during which he seemingly settles permanently into the life of an assassin and crime boss. The last bit that attempts any empathy for the characters is when Emu asks Yō to give her tattoos of two tiger cubs on her abdomen to represent the children they can never have. 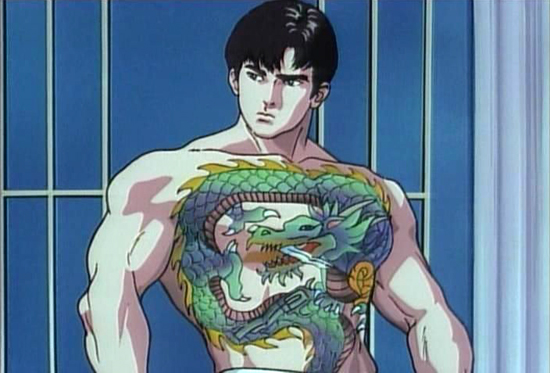 The original manga by Kazuo Koike (Lone Wolf & Cub) is written fairly similarly to this anime and pretty much vanishes into its reasons to get naked and have sex scenes, so much so that I wound up calling this series “Flying Semen” at one point. Despite that, there’s an artful quality to Freeman’s assassination techniques that nicely complements the parameters of the story. But then, in later volumes, it seems sex and nudity become the entire point of the series and any hope I could have for enjoying a coherent storyline is lost.

Then there’s the animation quality, which was just about average for late ’80s techniques. It’s based on the manga artwork of Ryoichi Ikegami (Sanctuary, Mai The Psychic Girl, Spider-Man), which utilizes a lot of shadows and shading techniques, and generally realistic features for the characters. In the anime, however, a lot of the shading is non-existent and everyone looks rather bland on the screen. Volumes 5 and 6 add more of the shadows into the artwork, but by then the animation’s stiff for some reason; I guess the budget was running out or something.

There’s also the voice work to consider. This was done in the days of Streamline Pictures, which means voice actors are listed but not credited properly on the videos. After a trip to Internet Movie Database, I learned it was Steve Bulen who decently performed the deadpan voice for Yō. Actually, the cast in all performed similarly to the actors for The Professional: Golgo 13, in that the men were ok, but not great, and had to blurt out run-on sentences half the time, while the women sounded dreadful for the most part. Actually, I take that back; they were marginally better than the ones on Golgo 13, but still not very good. 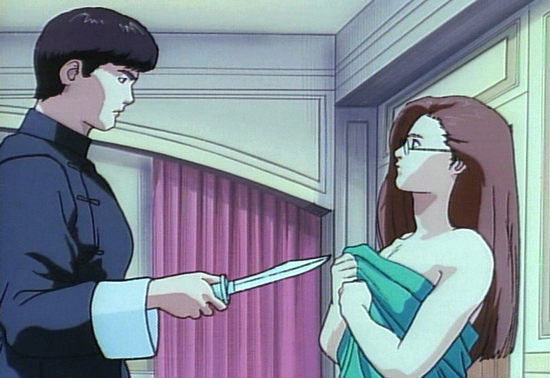 The first episode has one sequence I’m till scratching my head over, but I’m not sure whether to blame scriptwriter Greg Snegoff or ADR director Carl Macek (R.I.P.). In this scene, Emu is being interrogated by a police detective when she tells him, “You can stop playing the good cop/bad cop routine; it’s not working.” Now she says this to ONE detective when such a ploy is always done by TWO or more officers. So I have to add ‘idiocy’ to the reasons this dub is bad, along with the so-so performances. In previous releases, the subtitles kept changing the main character’s name from “Yō” to “Ryo”, but to Discotek’s credit, the subs remained consistent and were easier to look at here since they didn’t inset black in blocks to indicate new character names like the last releases. For the most part Discotek’s cleaned up version made for an overall better presentation and the series was a bit more enjoyable than before.

This is the best release of Crying Freeman to date, so if you’re already a fan of this show and you’re looking to improve your collection, this set is worth the double dip. It’s six episodes spread over two discs in one complete box at a relatively low price, which isn’t bad at all. However, if you’ve not been a fan of such anime, this set isn’t likely to change your mind. I once asked Koike his opinion of this anime at San Diego Comic-Con, and he didn’t even remember that Crying Freeman had been animated, if that tells you anything. So even with the improvements here, unless you’re desperate for some new anime to watch and don’t care if it’ll leave you imitating the title character, I’d have to recommend you take a pass on Crying Freeman.