For Love of the Game: A Baseball Anime Primer 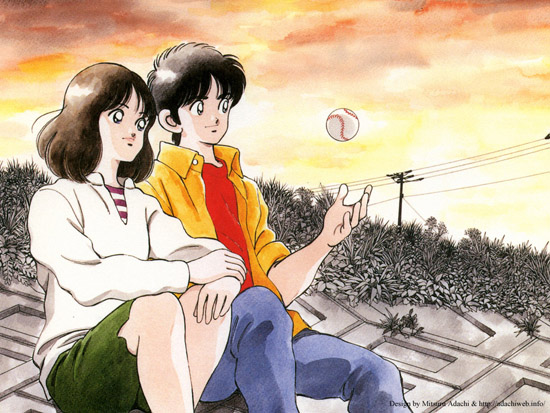 I admit it – it’s a little early in the year to be thinking about baseball. But with the Super Bowl over and done with and the World Baseball Classic coming to Tokyo Dome next month, I’ve got America’s and Japan’s combined pastime on the brain.

With that in mind, we present a modest primer on Japanese baseball and its place within the anime and manga canon. Play ball. 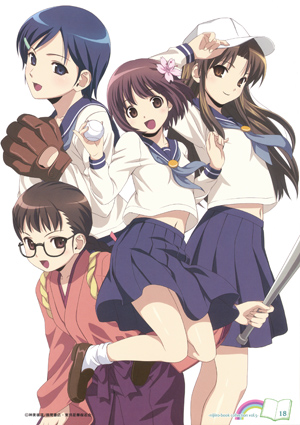 Japanese baseball is fundamentally the same as its American counterpart – 3 strikes, 4 balls, 3 outs, 9 innings – the works. But there are some small differences: the Japanese ball is apparently smaller than an American one, as are the stadiums. And unlike MLB games, which can go on indefinitely (in 1984, the White Sox and the Brewers played a 25-inning game spread out over two days), Japanese games end after 12 innings, which means in Japan, there is tying in baseball.

But the main divisions between American and Japanese ball have more to do with culture than rules. Japanese play, as one might imagine, relies less on bulky guys with huge home run counts and more on speedy players hitting base hits, and a lot – and I mean a lot – of sacrifice bunting. It’s this difference in playing style that initially shakes a lot of otherwise great Japanese players when they move over to the American majors (the reverse is true, ostensibly, for American players who end up in Nippon ball).

The culture of fandom is quite different too. In Japan’s pro league, Nippon Professional Baseball, fans of the home team and those of the visitors are segregated to different sides of the stadium, and while one team is up to bat, fans of the other sit in (relative) quiet, waiting for their turn to cheer on their offense, which they do with aplomb. Literal cheerleaders lead their side of the stands in well-timed chants that vary from batter to batter and which hardcore fans all have memorized. It’s a sight to see. 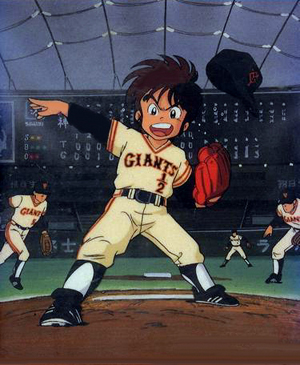 With baseball being such a big deal over here in Japan, it should come as no surprise that the sport has been the subject of much manga and anime over the years.

One of the earliest hit baseball manga series appears to be Star of the Giants (Kyojin no Hoshi), which ran from 1966 to 1971. Written by Ikki Kajiwara, best known for Tomorrow’s Joe, Star of the Giants is the story of a young pitcher for the titular Yomiuri Giants, one of Tokyo’s two pro teams. The manga, which is all about grueling training and fierce determination spawned a few anime films, the first of which was released in 1969, a 182-episode anime series, and several spinoffs.

Incidentally, Shotaro Ishinomori (who we recently profiled) got in on the Yomiuri Giants portrayal game a couple decades later with his manga Miracle Giants Dome-kun, which was adapted into a 49-episode anime series about a young pitcher named “Dome” (his dad apparently really, really liked baseball) who has perfected a magical throw that no one can hit.

Several other beloved baseball manga would appear throughout the 70s, including the hit Dokaben, which centers around high school ball and spawned a 163-episode series, Ippatsu Kanta-kun, an anime series notable as the directorial debut of Mamoru Oshii. And, most importantly, the 70s also saw the emergence of the king of baseball manga, Mitsuru Adachi.

Starting with his 1978 manga Nine (a reference, ostensibly, to the number of players on a team), Adachi has had a decades-long string of baseball hits, including Touch, H2, and Cross Game, all of which center around high school baseball and have been adapted into successful anime and live-action series. 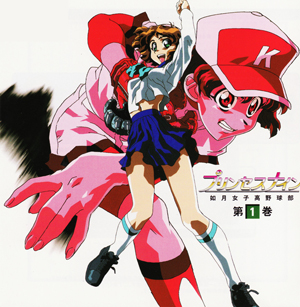 It’s a maxim that sports manga and anime doesn’t do well in America, and despite the common interest in the sport between our borders, relatively little baseball stuff has been released commercially in the States. That said, we’re not completely hosed. Funimation released the first season of Big Windup!, a high school ball series, though low sales prevented them from going after the second season. Princess Nine, a series about an all-girls’ team who form to compete in the Koshien tournament, was licensed by the late ADV Films. Their reincarnation, Sentai Filmworks, released another girls-themed series, Taisho Baseball Girls, a 12-episode work about girls playing baseball in the male-dominated 1920s (think A League of Their Own, anime-style). Mitsuru Adachi’s aforementioned Cross Game is available on Hulu via Viz.

The author of a very good intro to Japanese baseball wrote, “baseball may be America’s pastime, but it’s Japan’s obsession.” Though soccer has made major inroads in the last few years, baseball is still number one in Nihon, and as a consequence, there are literally hundreds of anime and manga titles about the sport. With the baseball season rapidly approaching, it may be time to slide in to a good old Japanese baseball story.