One Piece is as powerful as ever, especially with FUNimation’s release of One Piece Film: Z. Luffy and the Straw Hats find themselves up against one of their most formidable film opponents yet in the form of Z and his Neo-Navy, so we had to enlist one of our strongest warriors, Daryl Surat, to cover the movie in the latest issue of Otaku USA magazine.

The following excerpt sets up just how powerful Z is:

The opening scene tells you most of what you need to know. The character Z—that’s pronounced in the British “Zed” fashion, by the way—looks like he’d fit right in alongside Broly from Dragon Ball Z or Cable from X-Force. He’s a towering muscle-bound senior citizen with spiked hair, shades, and an oversized prosthetic arm that he uses to dispatch armies as though he were a playable character in an Omega Force Warriors game. But since everyone in One Piece can do that, the real display of Z‘s might is that even Admiral Kizaru is forced to withdraw. Kizaru just might have the most unbeatable superpower out of anyone in the series. The guy’s made of light, has control over the light spectrum, and can MOVE at the speed of light; something that not even “fat guy who can sort of create a black hole” should be able to stand up to. But Z can, since we quickly learn that long ago he was known as Zephyr, the master instructor who taught every major Marine in the series how to fight in the first place! What happened to make him abandon his name and post for the sake of creating his own “Neo Navy” to eradicate all pirates is the key focus of the film.

For more on what makes One Piece Film: Z special, be sure to dig into the full feature in our February 2015 issue, on stands now! 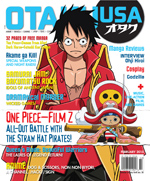 Read more of the cover story in the pages of the latest Otaku USA Magazine. For more great anime features, pick up the February 2015 issue of Otaku USA at your local bookstore,
order it from our online store, or subscribe to get every issue!