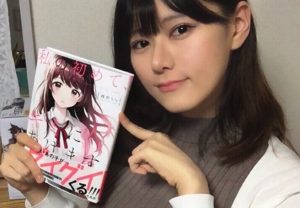 When you’re unsure of the identity of a particular artist, it’s easy to draw your own conclusions, especially after reading a bunch of their material. That’s why fans of manga artist Nishizawa 5 Millimeter—who specializes in art and stories centered on busty women and loving depictions of boobs in general—were shocked to discover the person behind the work is a woman.

It’s kind of understandable when you look at Nishizawa’s body of work. One of her recent art collections is #Jujoshi, which is described as “A boob book for readers of all ages” and “A selection of boob illustrations with social media-style photos as the theme.” One of the manga she posted on Twitter follows a woman who looks forward to getting pregnant after learning her already sizable boobs will get exponentially larger after the fact.

Here’s a sample of some of these and other works by Nishizawa:

Admittedly, some folks may have been tipped off last year when the artist illustrated some of the common issues women with big breasts have to deal with on a regular basis.

But it wasn’t until Nishizawa posted a photo of herself posing with one of her new books that it all came together at last.

Japanese fans were surprised to learn the artist they assumed was a boob-obsessed guy was actually a beautiful woman. “You look so much like the character on the cover of your new book!,” one commenter exclaimed. “I’d always thought you were a guy…” mused another.

It turns out some of her fans had already met her without even realizing it, because Nishizawa sells her doujinshi work in person at the twice-yearly Comiket. Again, this is also understandable, especially since some artists hire beautiful women to help with product promotion at Comiket. One fan tweeted, “So that beautiful girl at your booth at Comiket was you, the artist! … You were so nice to me when I made my purchase.”

So, what’s the lesson here? Don’t judge a book by its cover? Or, perhaps, don’t judge an author by their predilection toward drawing big manga boobs.