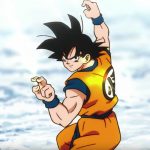 The tentatively-titled Dragon Ball Super anime film recently got a Japanese premiere date of December 14, and now we have a teaser to go along with that.

According to some info revealed during a Bandai Namco Entertainment lineup presentation, a global release is planned alongside the Japanese debut. For now, you can see a very nicely-animated Goku as he prepares to take on the mystery threat of what will be the 20th Dragon Ball feature film.