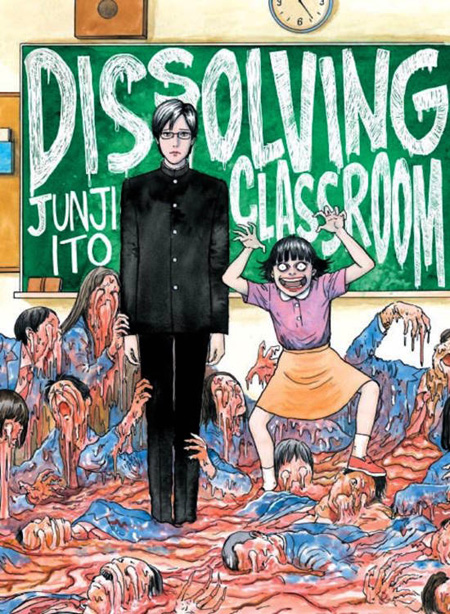 The horror manga of Junji Ito (Uzumaki) often walk the line between the scary and the ridiculous, never more so than here. Arisu immediately realizes something’s strange about transfer student Yuuma Azawa: he’s handsome but addicted to apologizing, constantly dropping to his knees and saying “I’m sorry!” for the slightest offense.

Even weirder is his little sister Chizumi, a giggling creep with a bowl cut who likes to startle people by saying, “Gimme your brains! Lemme suck out your soft, juicy brains!” Only too late does Arisu realize the true horror … the two siblings are thralls of the devil, and Yuuma’s apologies have Satanic power! Long-term exposure to his apologies will melt your brains (and other parts), turning you into a hideous liquefied corpse.

In a variety of ridiculous and increasingly gruesome scenarios, Yuuma and Chizumi go from place to place leaving a trail of gooey terror behind them. With Chizumi looking like a demented mascot from a children’s manga, the whole thing comes off as gallows humor, gradually building up to a slimy climax.

It’s more gross and silly than actually scary, though there’s something curiously deep about the idea of a totally passive-aggressive villain who kills you by saying he’s sorry. (Is he doing it intentionally? Unintentionally? Who knows?) For those looking for less funny scares, Ito delivers the goods in two short but interesting bonus stories, less than eight pages each.