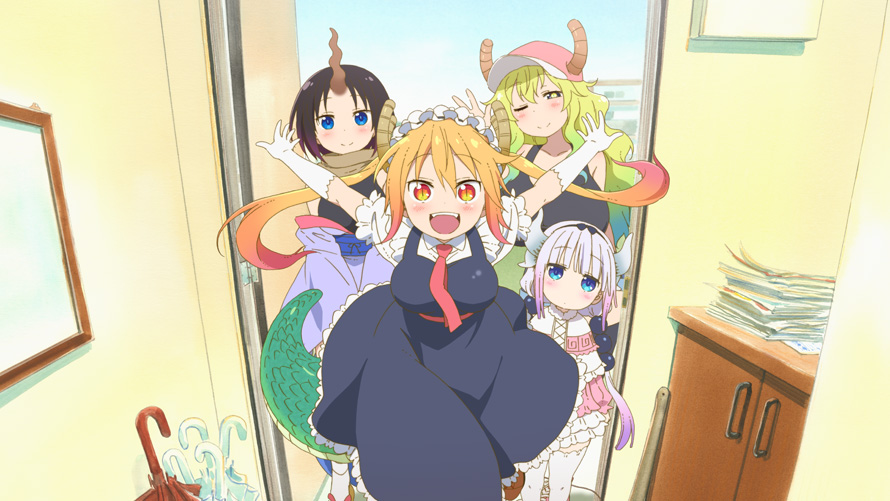 Way of the Dragon

Kobayashi, suffering a severe hangover, walks zombie-like through her morning routine getting ready for work. Just as she opens the front door to her fourth-story apartment, she’s greeted by the searing yellow eyes and long, green snout of a building-sized dragon staring directly at her. Is it a dream? Is it a hallucination? No, it’s a maid! Luckily for Kobayashi, the massive dragon soon morphs into a regular-sized human (with horns and tail) intent on repaying a life debt. Luckily for lovers of anime, this is one maid comedy that certainly doesn’t drag on.

At its heart, Miss Kobayashi’s Dragon Maid is about growing together through friendship and love. The dragon at the door, Tohru, comes to live with Kobayashi, and more dragons from various walks of life are added to the cast as the show continues. Some dragons come to live with Kobayashi, and others interact/live with other humans in her personal and professional circles. Bit by bit, all the dragons come to be more human and enamored with the human world as well as its inhabitants. Simultaneously, Kobayashi’s stoicism slowly softens thanks to the unrelenting affections of her newfound friends, acquaintances, and housemates. Within this heartwarming pretense lays the setup that enables most of the show’s humor.

Great comedy requires great timing, but the degree of indifference and listlessness in Kobayashi’s character ultimately allows for an extended strike zone—the longer the wait for the punchline, the bigger the laugh. Early on, Kobayashi’s initial deadpan plays to the logical, cold-coding office job she has. Her trying to rationalize the absurdity she’s witnessing first hand fits the frame of the character we’ve been given, and this makes her delayed reactions, which are actually to her inner calculations and not the surrounding situations, seem all the funnier. But the delay itself can also be the joke. Later on, once Kobayashi’s surrounded by and accustomed to dragons, her blasé nature becomes the joke in that the absurd has become so commonplace that now it is the trifling errors in which dragons attempt to imitate or interact with humanity that become ludicrous.

For a lighthearted comedy, Miss Kobayashi’s Dragon Maid certainly drops a couple of heavy names. The first is Fafnir. The Norse legend from which this dragon comes might point to why Fafnir the anime dragon hates humans, but he’s otherwise reduced to a brooding sort who falls hard for the MMORPG otaku lifestyle. Thinking about it, however, slaying and hording (even digitally) are a kind of perfect adaptation for the character. The other dragon of note with a familiar name should be Aztec deity Quetzalcoatl, who joins the Kobayashi cast in the form of the ridiculously busty Rucoa in too-short short shorts. The anime certainly does not have to go to any great length to play to the traits and history behind her character’s namesake.

The dragons largely stay in human form, and the story basically follows them around as they acclimate to the human world. Eastern and western dragon designs are represented and used frequently, but since the dragons can cloak themselves when necessary, there’s no real conflict to propel the series. (Even for those dragons who retain their horns in human form, every single human just automatically assumes the dragons are cosplaying.) But since comedy is the driving factor of this show, all it really needs to do is keep serving up situations that play to the absurd premise, and everything will be fine. Breaking up each episode into or with vignettes makes the gags in each 24-minute foray into dragon country feel quick, fun, and fresh despite the series being a pretty standard sitcom with some swapped-in elements.

As tends to be the case with anime sitcoms, the mania of love and friendship is portrayed via hyperactive characters. One of the excellent things about this particular series, however, is Kobayashi’s slow realization of how she’s changing. How she comes to bloom socially and tongue-in-cheek romantically is a welcome safe haven for those of us who shrink from loud voices and flinch at flailing appendages. Kobayashi also has a motherly side that’s quite natural and comforting—something probably owed to a combination of Mutsumi Tamura’s voice work and the pastel color palette. It’s also worth mentioning that the two yuri relationships in the show are very different … at least in how they’re handled.

Tohru often declares her love and general admiration for Kobayashi, who wears, with class, either a quiet blush or a contented smile in acknowledgement, and that’s about as far as that relationship goes (along with playful fits of jealously by Tohru). The longing of elementary schooler Riko Saikawa for Kanna, an elementary school-aged dragon, and her responses, however, walk a fine line between cute and uncomfortable. As Kanna’s VA offers up a deadpan delivery for the character’s standard voice, Kanna can be likened to Kobayashi, and both can be said to be the mature ones in their respective relationships due to their air of restraint. Tohru and Riko, however, represent immaturity through constant and unbridled fawning.

Adapted from Coolkyoushinja’s manga of the same name, Miss Kobayashi’s Dragon Maid is a warm and fun comedy that will take many by surprise. Hearing the premise makes it easy to write this series off initially, but spending time with these characters is pure comfort food. For its part, Kyoto Animation doesn’t so much serve up a visual feast as concentrated efforts regarding two things: realistically portraying the heft of large, winged reptiles and the buoyancy of bouncing boobies. The OP is light and fun and will definitely get you in the mood for more of same, although the best thing about it is the backing song, “Rhapsody of the Blue Sky,” by fhána. The ED is a little more themed, with the stickering of a calendar, a LINE conversation in stickers, and picture-a-day calendar framing featuring the characters doing their daily thing—all backed by one hell of an earworm: “Ishukan Communication” by Choro-gonzu. This show is fluff, pure and simple, but it’s fun fluff, and I recommend it.

For a second opinion, check out Michael Goldstein’s review of Miss Kobayashi’s Dragon Maid from the August 2018 issue of Otaku USA Magazine.