Digging Through Treasure With The Osamu Tezuka Story 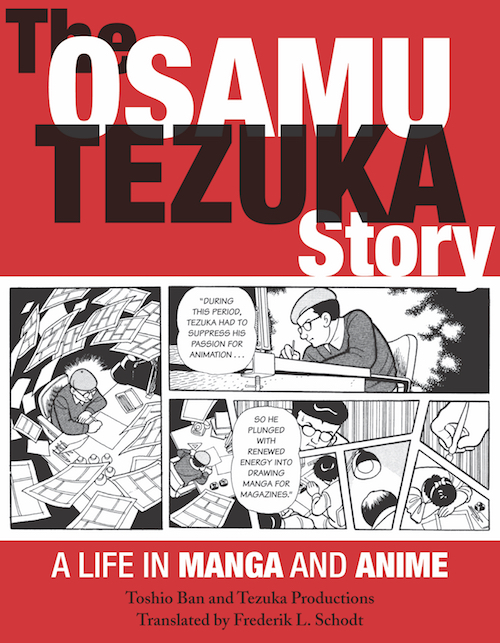 The Osamu Tezuka Story is a treasure trove for a number of different reasons. For one, it is an in-depth look at the life of Osamu Tezuka, the nicknamed God of Manga, going from his birth to his death. Because Tezuka was so influential in the manga and anime world, it’s also its own history on these two mediums from about the 1940s to the 1980s, showing the mechanics of how they were done at the time, the culture around them, and the ways they developed and excelled. Additionally, it’s just a well-written and beautifully illustrated manga that’s a joy to read.

This manga biography came out after Tezuka’s death in 1989, but this is the first time we can read it in English. Translator Frederik L. Schodt, who worked with Tezuka during his lifetime and spoke to Otaku USA pre-publication, notes in his foreword, “[T]his book is probably as close to a posthumous autobiography as is possible.”

The book itself is narrated by Tezuka’s character Mustachio, and direct quotes from Tezuka are always noted and sourced. While most of the book consists of drawings (done, appropriately, in a similar style to the Manga God’s), it also includes some photographs and original drawings. Perhaps some of the most fascinating images are original drawings from Tezuka, especially from his childhood. Not surprisingly, he was drawing obsessively from a very young age, and the book gives examples of how he matured artistically. Very early art of his looks pretty typical for a small child, but very soon you can see him go above and beyond his peers.

Tezuka began his artistic career as a young man. The time was ripe for manga, but Tezuka’s stuff was also different—he liked doing long, detailed stories in his manga, which paved the way for the many-volumed manga series we have today. He would also work on many different manga serializations at the same time—perhaps eight different ones a month! His editors hated having to chase him down for deadlines, but, oh, they loved him and what he created. His workload seemed to be nonstop, with him getting maybe three hours of sleep a night, and many of his colleagues would worry about his health. But instead of doing less work, Tezuka kept up with his manga while also diving into the world of animation, his dream. At one point Stanley Kubrick wrote to him, wanting Tezuka to help with the art design on 2001: A Space Odyssey, but there was so much other work to be done that Tezuka had to turn him down.

The Osamu Tezuka Story is written by those who obviously adore Tezuka, and while reading it, it’s hard not to adore him as well. The beret-wearing artist was prolific to a point almost unimaginable—the book ends with pages and pages of his work listed off—and his need to learn, explore and experiment with artistry comes off on every page. Along with giving readers a look into the personal side of Tezuka, this work will hopefully cause more of his titles to be made available in the West.