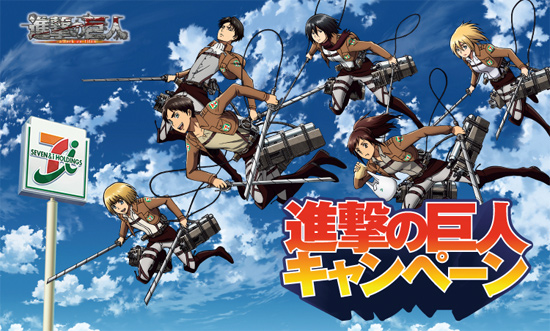 Spring is in the air. Birds are chirping, flowers are blooming, and new anime is airing.

In the spirit of the season (or it’s just a coincidence…), two of Japan’s convenience stores, or “conbini,” in the Japanese parlance, are simultaneously running anime promotions. How do they stack up against each other? Let’s take a look.

In the lefthand corner, we’ve got 7-Eleven, who are arunning  promotion based around ultramegasuper smash hit Attack on Titan. Seven’s attack on your wallet works like this: if you spend 350 yen (about $3.50) on any item in the store, your receipt will carry a serial number you can enter online to win Titan prizes.

The giveaway, which is in cooperation with Banpresto’s Ichiban Kuji, features a pretty decent selection of stuff to be won. You’ve got figurines of Eren, Mikasa and Levi measuring about 20cm, reproduction art, towels, clear files, mini-figures and blade chopsticks. 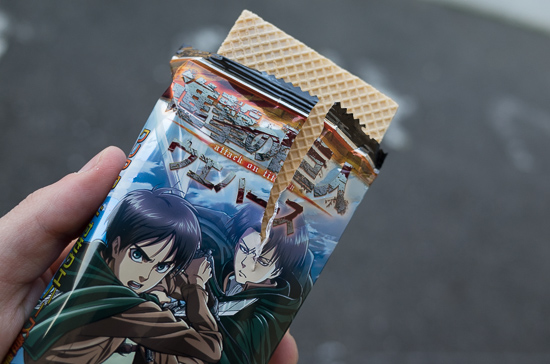 Ichiban Kuji is also offering up an Android app with which you can take a picture of your Attack on Titan figurines and have dialogue bubbles from the manga show up next to them, or stick the Attack on Titan logo just about anywhere. Looks… fun?

As for customers that are less interested in lotteries and more in acquiring items immediately, 7-Eleven’s got them covered too. 7-Eleven stores have a temporarily shelf devoted entirely to Titan merch. Most of it is pretty cheap (this is a convenience store, not an anime shop, after all), but there’s some interesting trinkets on offer, including Titans you can attach to the rim of your coffee cup as if they’re climbing over the top.

I opted for an Attack on Titan-branded wafer, which tasted just as cardboardy – yet somehow great – as its American counterparts. And as a bonus, I received a credit card-sized collectable card of Survey Corps Krista Lenz. 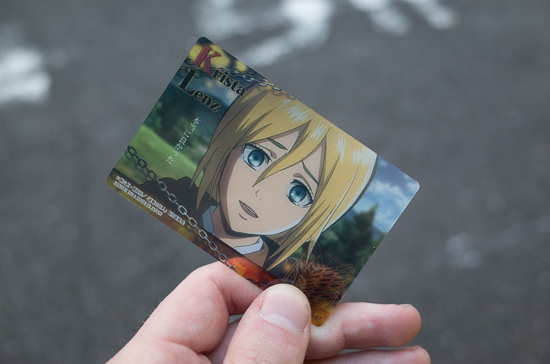 7-Eleven’s Attack on Titan campaign runs until the end of April.

But just as 7-Eleven’s not the only conbini in town, nor is its anime promotion the only one capturing the hearts, minds and wallets of otaku around Japan.

Over at Lawson (which, FYI, is where you go to get tickets for the Ghibli Museum), they’re running a similar promotion for the new season of JoJo’s Bizarre Adventure. 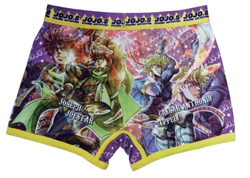 The system is roughly the same: shoppers at Lawson accrue points as they shop, and the higher your points get, the better the items you’re eligible to win become. The lowest tier item is a cell phone strap, followed by a cushion, 3D character poster, a postcard set, signed copy of an episode script, and finally, an art plate.

Much like 7-Eleven’s campaign, there are plenty of JoJo’s knick-knacks available for immediate purchase, including candy, tote bags, tissue boxes and bandanas.

Calling a winner in this round of the conbini wars is tough. Attack on Titan’s certainly the more popular franchise, but the quality of the Jojo’s goods (the stuff on order, anyway) wins out in my book – I mean, who wouldn’t want some JoJo underwear? If you were in Tokyo, which conbini would you find yourself ducking into first? Sound off below, dear readers, and look forward to the next round of the battle of the conbinis. 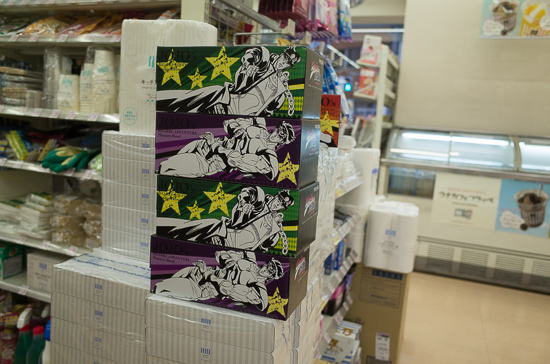