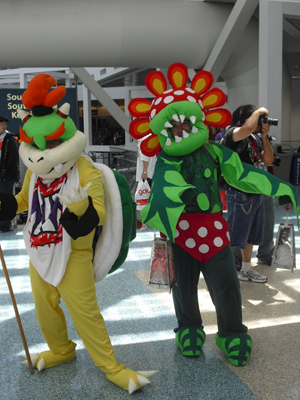 So um yeah… it was a quiet couple days in Los Angeles. A few breezes during the day, a couple folks in costumes…

Who am I kidding? Anime Expo 2010 has been one of the busiest this writer has attended and covered. Through all the interviews, panels, concerts and licensing announcements, it’s been pretty hectic to take in all this info. We’ll be doing articles on some of the guests separately, but for now let’s check out some of the general happenings of the con.
One of the things Anime Expo has become known for is the sheer amount of cosplayers, which is something one might expect at a function that gets 40,000 people in one spot. There were some pretty works on display in the halls, the viewing rooms, the arcades and of course the panels rooms… and that brings us in a roundabout way to the first industry presentation from Bandai Entertainment.
Hosted by Robert Napton and Ken Iyadomi, they initially gave folks an overview of current happenings, such as Bandai’s recently launched  online ordering service simple called “The Store.” It will serve as a new distribution center for Aniplex’s releases of the Gurren Lagann movies, in addition to Bandai’s own releases such as the Zeta Gundam: A New Translation movie box sets, Kurokami and The Melancholy of Haruhi Suzumiya Collections. This in turn led to a vocal performance by SOS Brigade leader Christina Vee, who came out to sing the theme song.
Following this was Bandai’s big licensing announcement of the day: the musical anime K-On, focusing on an adorable all-female band. This signaled the return of Ms. Vee singing the theme and joining a few of her prospective voice castmates on the stage while Mr. Napton continued with the presentation, which included information on Bandai’s manga releases of Code Geass, Lucky Star, and Gundam 00. 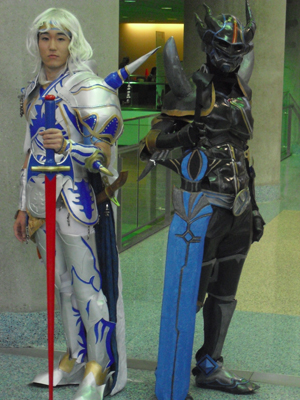 Speaking of Gundam, fans were treated to a special appearance by voice actress Stephanie Sheh, who spoke about working on Bandai’s international release of Gundam Unicorn. “I was pretty sick while working on episode 1 and we had to do it on Thanksgiving.” According to Ms. Sheh, the English track for episode 2 hasn’t been recorded yet, but the first volume (of which there will be six) has been Bandai’s best blu-ray seller yet and remains exclusive to the Bandai website “The Store” and Amazon.com.
So after the panel, a couple of us made our way to the dealers’ room, which was decent sized but still seemed smaller somehow. There was a bit more space, and they actually had the artist alley in the same hall with the dealers this year.
Soon, the dealers’ hall closed and the cosplayers came out in full force. By coincidence, my camera was still charged up at that point, and so the clicking began. I decided to tour the City of Angels that night and seek new adventures. Thus Anime Expo Day 1 was over (while Day 0 still resonated in me), with plenty more to come.

Incidentally, check out Rock’n Fish at the L.A. Live center and get an excellent smoked salmon sandwich.

I have to give serious credit to my translator Rika Everett and my secondary photographer GAI. Were it not for these two helping me out, much of the recording of what you see in these reports from that weekend would not have been possible. So a giant dose of thanks to these people for their serious efforts. 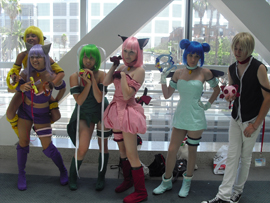 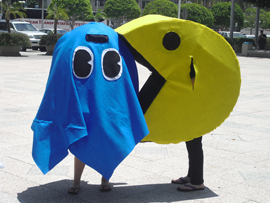 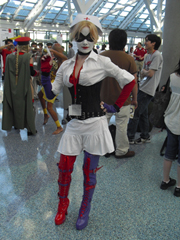 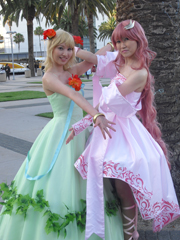 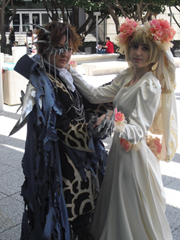 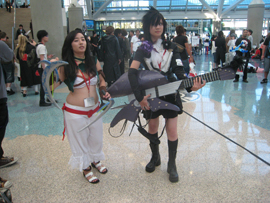 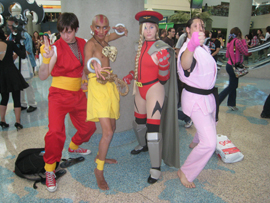 A Simple Remembrance: Me and Peter Fernandez
Madhouse-animated Marvel Shows to Air on G4 in 2011