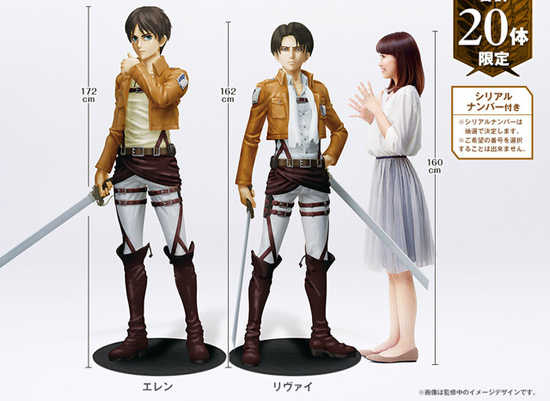 You know what I’ve always felt is lacking here at Otaku USA Japan Headquarters? A life-size figurine of Attack on Titan’s Eren, that’s what.

I think I’ll saunter down to my local 7-Eleven and put in my name for their new lottery, in which 20 lucky Titan fans will win the chance to buy either a life-size Eren or Levi.

Makes the Colossal Titan Bearbrick look like a bargain.

Man, are there really 20 people who like Attack on Titan enough to shell out $14,500 on one of those figures? I guess 7-Eleven thinks so…

View all posts by Matt Schley
New Dragon Ball Super Series Gets Manga
[Review] The Next Generation Patlabor: Final Battle in the Capital