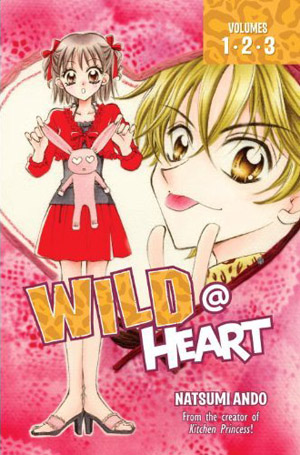 Del Rey really likes Natsumi Ando this month. They’re releasing two new series from her on the same day: first the mystery Arisa and then the romantic comedy Wild @ Heart. Though both series are from the same creator and have similar art, their storylines and genres are quite different.

Wild @ Heart stars hopeless romantic Chino, whose attempts at wooing one of her classmates fail miserably. Shortly after that, her kooky father returns from a safari in Africa and has brought Chino a souvenir. And that souvenir happens to be a wild naked boy taking a bath.

It turns out he was raised by leopards on the made-up African island of Madara and Chino’s father taught him some Japanese and brought him back home. The wild boy is called Hyō-kun because “Hyō” means “leopard.” After a haircut and some clothing, he looks much more presentable, and it’s clear he has a crush on Chino. It isn’t too long before she starts developing feelings for him as well, but she can’t quite seem to admit she likes an “uncivilized” boy.

That doesn’t mean other girls aren’t interested. Girls from all over want Hyō-kun. At first he only speaks in broken sentences, but pretty soon his grammar is up to speed and he gets a good handle on modern Japanese life. (However, that doesn’t stop him from licking Chino’s face and calling it a “jungle kiss.”)

Hyō-kun pays little attention to the other girls, as he’s only interested in Chino. Meanwhile, he’s more or less becoming part of Chino’s family. All this is set to change, however, when Hyō-kun’s biological father is found. The father wants his son back and is prepared to take him overseas and not let him see Chino again.

When it comes to the art, most of the characters have a similar appearance: thin body, big eyes, pretty hair. That makes Chino’s father stand out since he’s rotund, half his daughter’s height and has dark circles under his eyes. But he’s going to have to be a pretty dotty character to disappear into Africa and return with a boyfriend souvenir for his little girl. Both Chino and Hyō-kun look like the typical cute couple in a shojo series.

One can’t help noticing similarities to Tarzan, but other than a boy being raised by animals, it’s pretty different. Wild @ Heart is fluffy and easy to read, the type of book that’s good for an escape because it’s lighthearted and not overly complicated. All three volumes are contained in this one omnibus collection, along with the shorter works “Wild Night at the Haunted Apartment” and “7 Days ‘Til the Kiss.”