Xam’d: Lost Memories is a show that’s taken a curious route to reach the anime-loving public.  It first dropped in June of 2008, as a launch-day exclusive for Sony’s new Playstation Network online service.  This is interesting not just because it makes Xam’d an early example of a truly high-quality ONA (original network animation), but because North America got it a few months before Japan, whose version of the PSN wouldn’t receive the series until September. Of course, it would’ve been dumb to keep something of Xam’d‘s quality off of television, so the show appeared on Japanese TV shortly thereafter. You’ll notice that I’ve already used “quality” to describe Xam’d twice. I’m happy about this, to a certain extent, because I’m specifically referring to the show’s technical proficiency and artistic consistency. In a field that’s grown thick with cheap digital trickery masquerading as animation, Xam’d practically leaps off the screen with lush backgrounds, smooth and eye-catching action, and distinctive, hard to forget character designs. Some might point to the show’s pedigree (it’s a BONES joint), but I’d specifically zero in on the director, one Masayuki Miyaji. Here’s a guy who cut his teeth at Studio Ghibli before immediately getting to work on some of anime TV’s most visually bold action shows, like the never-disappointing Eureka Seven. 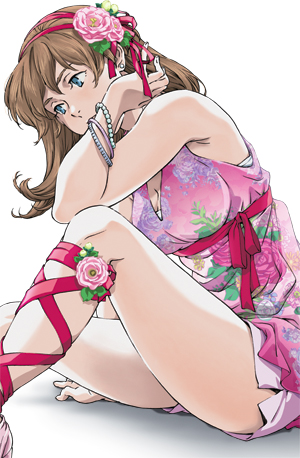 Xam’d looks like it might be a distant cousin to Eureka Seven, with its wide-eyed, tousle-haired heroes, expansive azure skies, and ferociously original mecha design, but it’s not nearly as forthcoming with its plot. Here, Miyaji steals a page from the Yoshiyuki Tomino playbook and injects the viewer directly into the story’s carotid artery, leaving this cartoon’s impressively complicated world, weird vehicles and settings, and huge variety of characters to be discovered rather than explained. We soon meet protagonist Akiyuki Takehara of idyllic Sentan Island; almost immediately he’s caught in a brutal and sudden terrorist attack that alters his physical form in strange and scary ways. Forced away from his devoted schoolyard friends and seemingly dying from his transformation, Akiyuki is confronted by a strange, painted girl that looks almost exactly like Nausicaa. “Come with me if you want to live,” she tells him, and whisks him away on her glider, thus completing the Nausicaa swipe.

That’s not to say that Nakiami, the Nausicaa-a-like, isn’t a worthwhile character. She’s quiet and thoughtful; there’s a name for Akiyuki’s affliction, hiruko, and Nakiami is devoted to helping people who suffer from it—because although this condition grants some pretty amazing powers (Akiyuki almost immediately sprouts enormous, powerful limbs), the patient’s subsequent physical and mental breakdown results in them literally turning to stone.  Nakiami can help Akiyuki avoid this fate, but only if he joins her on the good airship Zambani. The Zambani is kind of like this world’s Pony Express—they’re literally a flying mailboat, crewed by a neat cross-section of characters young and old, from the gentle thirty-ish cook and her young son to the egg-headed, wizened engineer, to the brassy, assertive woman with cats-eye glasses and a perpetually bared midriff. That’d be Ishuu, the ship’s captain, and this group is only one side of an emerging conflict. See, there’s a long-standing war between the northern and southern governments, both of whom seek to control and weaponize hiruko. There’s an aboriginal population who just wants everyone to get bent and go away, and there’s regular people like Akiyuki. 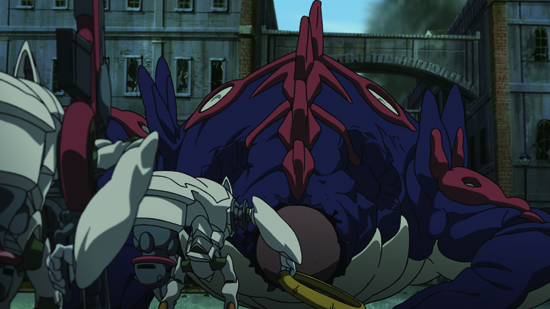 There I go again, summarizing away. I’m trying not to, but the show kind of calls for it, because it is very, very confusing in the early going, shades of Aura Battler Dunbine or King Gainer (not surprisingly, Miyaji worked on Gainer). Even with the above 400 words, I’ve barely scratched the surface—there’s something like 16 major characters just in this first 13 episodes, from Akiyuki’s would-be school girlfriend (she’s really distraught by what seems to be his unexplained disappearance) to his estranged parents, to his tentative new friends on the Zambani. The show’s most intriguing character, for my money, is an officer with the Southern Army who arrives on the formerly neutral Sentan Island to investigate the attack. He’s named Tojiro Kagisu, a scarred man with a steely glare; he used to live on Sentan so he knows the locals, but he’s all business—when his attache warns him of a rainstorm, he brusquely replies, “It’s a cleansing rain; it will reveal my true character.”

Kagisu is portrayed in Japanese by Yasunori Matsumoto, and by Chris Hutchison in English. Hutchison hasn’t had a lot of experience, but he’s a revelation here—his voice is weary and raspy and bursting with character. I’m very pleased that Section 23 Films are finally getting back to the business of including dubbed versions on their DVDs—while dubs are expensive to produce, more and more with TV shows I find myself watching in English, so having that option is valuable. And honestly, it had better be valuable—at $35-40 from most outlets, the show isn’t altogether that cheap. 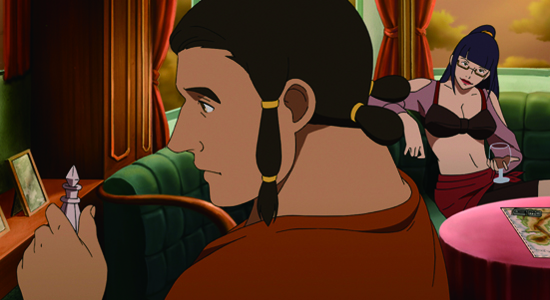 At first, Xam’d: Lost Memories is an outrageously mixed bag. Its animation is eye-catching, but its story and characters seem intractable and weird. It gets easier to take the more we learn about Akiyuki and hiruko and Xam’d, the not-yet-explained name of the creature type he transforms into. I’m still not sure if I really like Nakiami (she straddles the line between “introspective” and “boring”), we haven’t learned enough about the rest of the characters, and the creatures that Akiyuki and others infected with the hiruko transform into are alternately impressive and completely silly-looking, sort of a Guyver by way of King Gainer scenario. It is a bit difficult to recommend Xam’d wholeheartedly, but I’d be lying if I said I didn’t want more after this first half ends. Be warned: episode 13 ends with a bona fide cliffhanger!