Tsukigakirei Anime Review: Romance worth falling in love with

Akane Mizuno is the rising star of the track team, and Kotaro Azumi is an aspiring novelist and president of the literature club. Both are in the same class for the first time as third years at Kawagoe City Daisan Middle School and both help out the equipment group during the sports festival. They initially connect via random glances at school and grow closer to one another through the sticker-tastic instant messaging platform LINE. The problem is that they can’t seem to get a conversation going any time they’re face to face. They’re not the most likely of matches, but romantic chemistry isn’t exactly science.

Sure, there may be a number of reasons to not watch Tsukigakirei (as the moon, so beautiful): it’s another middle school romance, both main characters are that wretched kind of awkward around each other that makes you want to strangle the screen to bring them closer (in any and every aspect) sooner, and the animation, especially throughout the first half of the series, appears to be some sort of cruel joke on visual consistency. But for all the bright orange warning signs with LED blinkers at each edge, Tsukigakirei pulls an unexpected victory through storyboarding, scene composition, and a script that moves the characters forward through realistic, conversational (read: nonexpository) dialogue and lack thereof.

Tsukigakirei really knows how to make use of silence and stillness yet still captures the natural dialogue of teenagers amid friends and family. The contrast between the two is used to evoke a spectrum of emotions, and it all feels surprisingly genuine … if not way too close to home for some (re)viewers. These are characters falling face first into love for the first time and trying to reconcile why everything isn’t falling into place like a fairy tale even though the emotions they’re experiencing make it feel like one. And that’s why this show is so great. The tension built around being able to communicate, the main characters’ ability to do so being so tenuous, emphasizes the critical nature of each interaction. Thus breaking communication—as easy as a drained battery or having a phone confiscated—and the reactions thereto are super effective.

More tension is added via love triangles pointed to both sides, and the nature of those relationships is more than an absentmindedly injected plot device; these are forces at work that convey to the audience how true the protagonists’ feelings are for one another. The respective love triangles would feel contrived, after all, if it wasn’t for their contrast with the protagonists’ feelings. Each crush can communicate fluidly, and that’s a direct threat to each invested side. How each protagonist deals with their confessors and each other’s divulged words about the characters themselves and the nature of their connection. But space and time apart is not necessarily always equated to tension.

The characters in Tsukigakirei spend a lot of time apart from each other, which is fantastic for two reasons: it establishes the situation, which is their crutch and curse, and develops the characters’ worlds—family, friends, hobbies, and duties—separately. (Side note: this is also where most of the quality animation resides.) And in the end, isn’t this what makes forming a bond so difficult—entire worlds colliding and merging to settle in a new and temporarily unnatural orbit?

Reading the series’ plot summary, this original anime almost immediately comes off as a dismissible LINE commercial. And maybe it is. But it’s one with an incredibly touching string of events as written by Yuuko Kakihara, who’s been involved with such series as Chihayafuru, Orange, and Kids on the Slope, and refined for the screen by director Seiji Kishi (Humanity Has Declined, Angel Beats, Kamisama Dolls). Add in a typical romantic score of strings and piano, some lovely solo vocal songs by Nao Toyama sung over more tender moments, as well as traditional flute and taiko (drum), and this is definitely a drama to fall in love with. 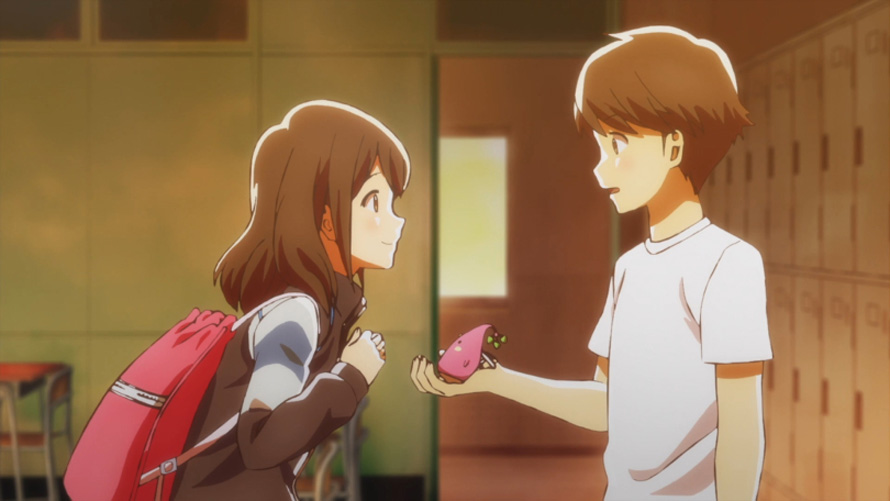 P.S. The bumpers that start after Episode 4, which follow the new relationships of the side characters, are not to be missed and add some much needed levity after certain episodes.

P.P.S. Don’t you dare not watch through the end credits.

Made in Abyss Anime Review: That escalated quickly!
Extended Version of In This Corner of the World Announced