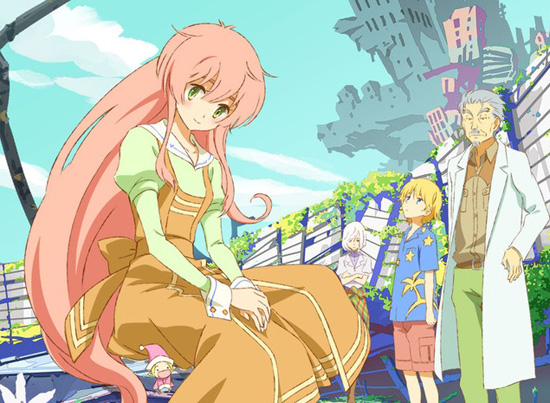 Humanity Has Declined (Jinrui wa Suitai Shimashita)—based on a series of light novels by Romeo Tanaka—has a title that’s much more dire than its subject matter. What sounds like a post-apocalyptic pity party is really a somewhat nonsensical comedy with a bright color palette, albeit one that has a bit of trouble deciding what it wants to do throughout its run. What we end up with is an interesting but woefully uneven show that puts character growth on the back burner and comes out guns blazing with the anime equivalent of improv.

The story revolves around a nameless protagonist who eventually comes to be known for her ability to make sweets. Believe it or not, this is a skill that comes in handy, because, as the title suggests, humanity has declined. As the old humans fade from the spotlight, new humans are on the rise. The “new humanity” is comprised of tiny creatures known as fairies, and it’s our lead’s duty to bridge the two as a mediator between humans and fairies. This sets the stage for all manner of wackiness, most of which is caused by the gleefully inconsistent fairies, who, as far as we know at the beginning of the series, are capable of pretty much anything. Oh, and they love sweets. Perfect.

The first couple of episodes throw the audience right in the middle of things, immediately accepting the current state of humanity and the presence of fairies. It’s front-loaded with absurd gags as our heroine—voiced by Mai Nakahara (Nagisa Furukawa in Clannad, Juvia Loxar in Fairy Tail)—and her mute assistant inspect a strange factory run by a company called FairyCo. What they find inside is a virtual maze of mass-production, a suicidal bread loaf and, ultimately, cluckin’ cooked chickens with some lofty, sinister aspirations. 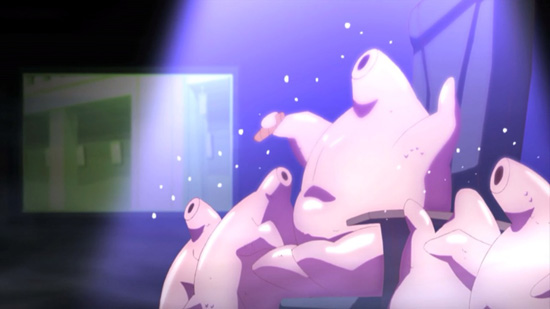 At first it seems Humanity Has Declined will continue down this road, ranging from pure inanity to stuff that’s mildly demented. Most chapters play out in two-part chunks, each only lightly connected to the overall story, which is what again? The high point of the first half involves everyone getting sucked into a living manga, forced to maintain their series’ popularity by acting out genre-spanning cliffhangers, but, much like humanity itself, the series starts to decline and derail from there. The low comes in a Groundhog Day style looping narrative, which I imagine mirrors how fans of Haruhi Suzumiya felt watching the “Endless Eight” episodes, albeit on a mercifully smaller scale. Look, I like nonsense as much as the next guy. I was a big fan of Excel Saga! It just helps if it’s funny.

And then, just when things are getting really dire and boring, Humanity Has Declined decides to start telling a story. We learn how the Sweets Girl became a mediator and made first contact with the fairies, which spiraled into her becoming an idol figure for a micro civilization that more or less collapses as soon as it’s established. Such is the way of the fairies. These new humans are scatterbrained, fickle, and aimless, which is appropriate because that’s essentially how most of this show is structured.

At one point someone says, “Common sense goes out the window when fairies are involved,” and that statement holds true for everything here. Humanity Has Declined is basically told in reverse, and while that may seem clever, it doesn’t do the story or its characters much justice. By the end of the twelfth episode we finally know more about our protagonist and how she got to where she was at the beginning of the series, but do we care as much at that point? She’s not exactly an active lead for that first half. If she’s a mediator between humans and fairies, she also acts as one between the audience and the action on screen in the opening set of episodes. Things happen to her and around her, but she doesn’t do much to affect anything. 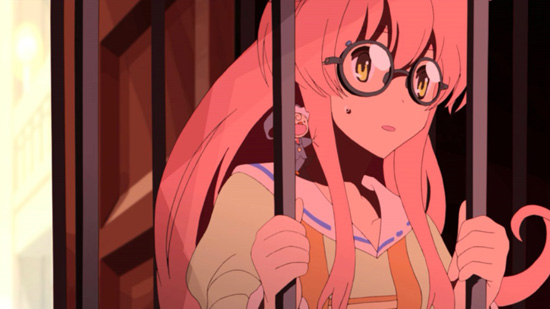 I’m not really sure what kept me going throughout my marathon of Humanity Has Declined. Maybe it’s the fact that it’s not awful; as much as I’ve been slagging off its overall narrative, it does have some redeeming qualities. While the Fairy designs aren’t very interesting—their static mouths make them seem even more like tie-in products than most cute anime characters—it’s otherwise an attractive enough series. Seiji Kishi (Angel Beats!, Carnival Phantasm) directs and Makoto Uezu (Is This a Zombie?, Utawarerumono) handles series composition, and there’s something about both the writing and direction that makes it seem like even stranger things are going on underneath it all.

So what does one do with a series that seems like it has so much more ambition bubbling beneath the surface level, but lacks the skill, or maybe even the quality of source material, to pull it off? Humanity Has Declined starts with discardable nonsense and ends with the meat of the story, and while it doesn’t quite work out, it’s also tough to imagine it working the other way around. The series is streaming on Crunchyroll, and while I can’t wholeheartedly recommend it, there’s something worth watching buried deep in the rubble of directionless fatuity. 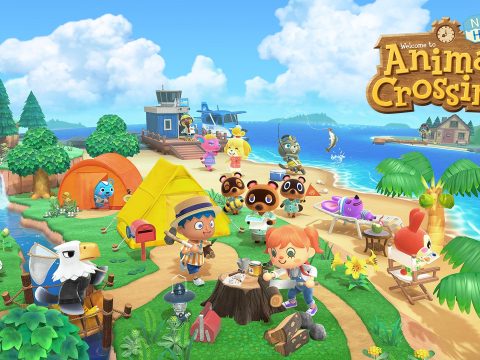