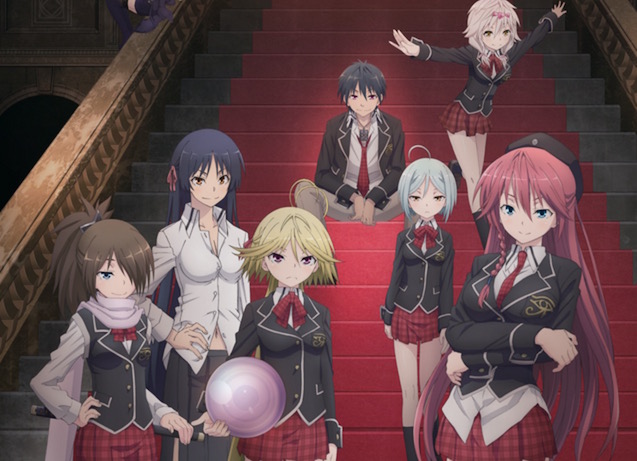 After being adapted into a TV anime in 2014, Kenji Saito and Akinari Nao’s Trinity Seven manga will soon return to the world of animation. As announced in this year’s August issue of Kadokawa’s Monthly Dragon Age magazine, an anime film adaptation of Trinity Seven is on the way.

In the meantime, the previous adaptation will be making its way to Blu-ray and DVD courtesy of Sentai Filmworks on August 16. Here’s how they describe it:

These are the sins, or “Themes,” inflicted upon seven young girls who reign supreme at Royal Biblia Academy, but one boy has resolved to master those sins and reclaim his world.

The boy, Arata Kasuga, has his daily life turned upside-down when a mysterious event called the Breakdown Phenomenon causes his cousin Hijiri to disappear into an alternate dimension. In order to understand the Breakdown Phenomenon and get his cousin back, Arata enrolls at Biblia Academy – and what awaits him there are seven young girls who use their “sins” to manipulate sorcery.