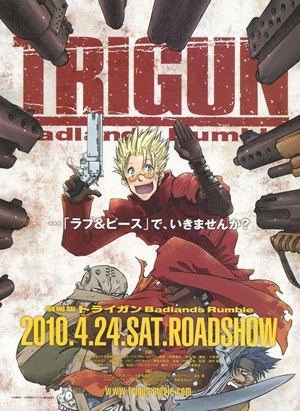 On Saturday, July 3 during this year’s Anime Expo, attendees filled a very large screening room for Funimation’s premiere of Trigun: Badlands Rumble. Although it debuted at Seattle’s Sakura Con even before its theatrical run in Japan, this was the first time anyone had see the movie officially with English subtitles.

Funimation’s Marketing Director, Lance Heiskell, came to warm up the crowd before introducing Adam Zehner, Director of Licensing and Acquisitions. He spoke about how the film’s producer, Shigeru Kitayama, wanted to show this movie after coming to Anime Expo one year prior, and had booked his flight from Tokyo to L.A. one week before this show for that purpose. Zehner then introduced Shigeru Kitayama himself, who thanked everyone for coming to the screening. Kitayama would also be around after the screening to hand several lucky viewers signed movie programs and sketches from the Trigun: Badlands Rumble movie.

For those not familiar, the world of Trigun is one of a futuristic western. People have advanced technologies and have pioneered different planets but generally function in a 19th Century wild west type setting, very akin to steampunk workings, if you will. Among the folks, there are whispers of a man called Vash The Stampede, known to some as the humanoid typhoon whose actions are so fearsome and destructive he how has a $60 billion double dollar bounty placed on his head. In reality though, he’s just a rather lovable guy with very good aim, a desire to preserve life, and an appetite for donuts. 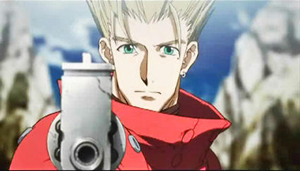 The film opens at the beginning of a bank robbery, being carried out by a rather large, formidable hombre named Gasback. He’s about to succeed when his gang decides to turn on him. This and other occurrences ensure the heist does not go quite as planned.

Some years later, we are shown a large caravan traveling toward Macca City for various reasons. Among the travelers is a rather capable looking female named Amelia who keeps being hit on by a blonde haired guy in a red trenchcoat. Two other guys decide to try and forcibly extract affections from her, but the blonde guy manages to diffuse the situation and get the other two men tossed off the caravan in the process.

In Macca City, two insurance investigators named Meryl and Milly are walking around taking stock of the lightbulb-powered town amidst rumors that Gasback is planning to come and steal a very large five billion dollar bronze statue. Gasback himself, meanwhile, is practicing his robbery skills in another town, but this time with a heavily-armed bodyguard. 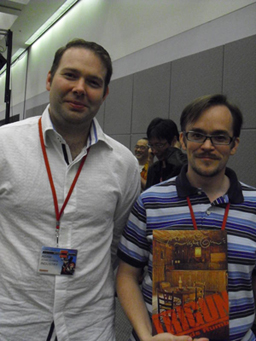 It all ends up being a fun romp involving many familiar characters of the Trigun mythos. The animation is pretty good, with somewhat basic-looking character designs running through some complex background scenery worthy of a film budget. Director Satoshi Nishimura (Hajime No Ippo, Gundam Seed) has put together an amusing work based on Yasuko Kobayashi’s (Digimon Tamers, Sgt. Frog) lively screenplay. There isn’t much here that adds new dimension to the characters; the film is more of a fun time with familiar friends, similar to the Cowboy Bebop: Knockin’ On Heaven’s Door movie. Both features aren’t completely necessary to understand their respective TV series at all and can actually offer a taste of things to newer anime fans. Kitayama specifically noted he wanted to set this film during the early parts of the TV series when the general tone was fun and lighthearted.All in all, Yasuhiro Nightow’s manga is still in pretty good animation hands, and anyone who watches Trigun: Badlands Rumble will be in for a fun time. Here’s hoping it comes to R1 DVD as soon as possible.
Bonus Content 235Reviews 1117