Some racers race for fame and fortune. Some race to be the best. Toppu Uno races for his big sister. The beautiful Myne Uno is an expert motorbiker, and all the guys on the track love her, but she only cares about the thrill of the race and her beloved little brother (and maybe about their grungy dad, a hobbyist bike mechanic).

As for Toppu, he’s more interested in putting together model kits than in motorbike racing, but he’s got a secret superpower: his powers of observation are so great, he can learn any move by seeing it once, and he can tell time like a stopwatch, down to 1/100th of a second! Gradually Toppu gets interested in racing, not for its own sake, but to be as cool as his sister is. (“The objective is to win the race. The means are recreating big sis’s riding.”) Will he achieve the impossible and be the youngest ever MotoGP champion, at the age of 18?

Motorbikes were a major theme in Kosuke Fujishima’s long-running rom-com manga Oh My Goddess!, whose hero also raced, when he wasn’t fending off goddesses’ affections. In Toppu GP he indulges his twin fetishes for girls and bikes once again, with a story 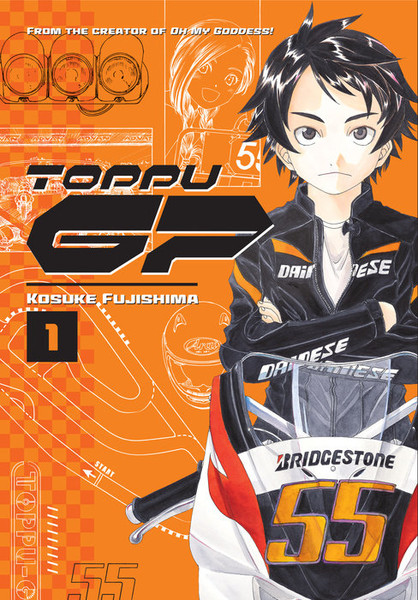 that’s oddly relaxing and moe: a race manga that’s not action packed or fast paced at all, but rather meditative and calm, with less focus on the track than on what’s going on behind the characters’ ginormous, soulful eyes.

Not that there are many characters; as of Volume 1 there are really only two sets of eyes, Toppu’s and Myne’s, and Myne spends most of her page time saying encouraging things to her lovestruck little brother. (“You can do it, can’t you, Toppu? Just say you can. That’s how you get the girl to fall for you!”) Myne’s such a perfect Magical Pixie Dream Sister, in fact, that the only way she could be realistic was if it all turned out to be a Fight Club situation where she was merely the imaginary creation of Toppu’s fevered mind. (What sister tells her brother, “If you win, I’ll give you a kiss?”)

Fans of bikes or tasteful sibling fetishes may enjoy it, but the slow pace, forgettable supporting cast, and overall lack of excitement make it lose in style more than it gains in technique.