Ever since his debut in 2015, Saitama, known as One Punch Man, has taken the anime community by storm. Here we have a superhero whose mission in life is to find an opponent that doesn’t take one hit to defeat. I don’t think that I’ve ever seen a man cry so much over a victory while I laugh at his misfortune. From the action to the laughs to the characters, this anime is a huge favorite amongst otaku. With that fondness comes the desire for action figures to show how big of a fan you are! Otaku USA is here today to give you our top 5 One Punch Man Figure to grace your shelves.

5. The Hunter is now the Hunted 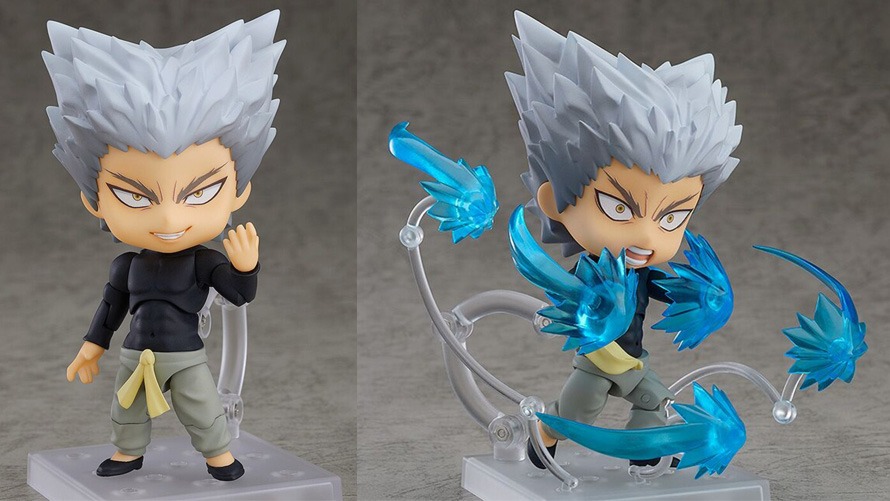 Last but not least, here is Garo, the hunter of heroes, as our 5th pick. This chibi-fied version is still ready to pack a punch in his mission to take out any and all heroes like the monster he is. Everyone likes a bad boy, and here’s the choice to proudly display as part of your collection.

Pros: This 4” figurine is poseable and comes with plenty of accessories! He has two faceplates that show off his game face and standard expressions. He also appears to come with 5 “effect parts” to assist in recreating your favorite fights. The figurine also comes with a changeable piece for his pants so it looks like his drawstring can blow in the wind during a fighting movement. His outfit and hairstyle have been translated well into this new form. This statuette is also in stock as of the time of writing.

Cons: This pick is not show accurate due to it being a chibi version. If you’re looking for a more accurate depiction of this monster, you’ll want to keep looking. This is also a relatively short piece, meaning that he can blend in with the background due to his outfit coloring. We also worry that the drawstring piece could easily become lost due to its size. 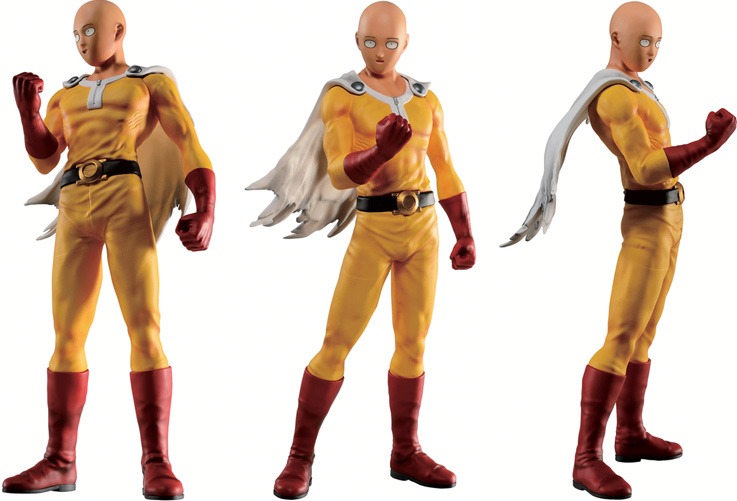 Saitama joins us again for number 4. Here we see him standing proudly after defeating his enemies. You can tell he’s done because we see him with his “normal face”. He must be glad that he still has time to enjoy breakfast before it gets cold. Nothing like a meal after a job well done!

Pros: The sculpting job is wonderful! You can easily see the muscles he normally hides, hence why it’s so easy for him to take out an opponent. The torn cape signifies that he’s had a rough battle, but he has emerged victorious. He stands around 10” tall, allowing him to be seen victorious by all around.

Cons: As remarkable as the sculpt is, this piece feels a little bit cursed to us. His “normal face” doesn’t translate well. The open mouth and positioning of the small pupils in those wide eyes make us feel a little bit uncomfortable. If cursed relics are your jam, then, by all means, please take advantage of owning this piece. If not, a “serious face” version also exists. It is set to release at the end of January 2021, but it is out of the preorder period as of the time of writing. This means that you’ll have to go on a waiting list for more to become in stock. We also would like it if there was more detailing done to show that our hero has been in a rough battle. Maybe have some wear and tear to the suit or have the shoes lightly scuffed. A torn cape can only communicate so much. 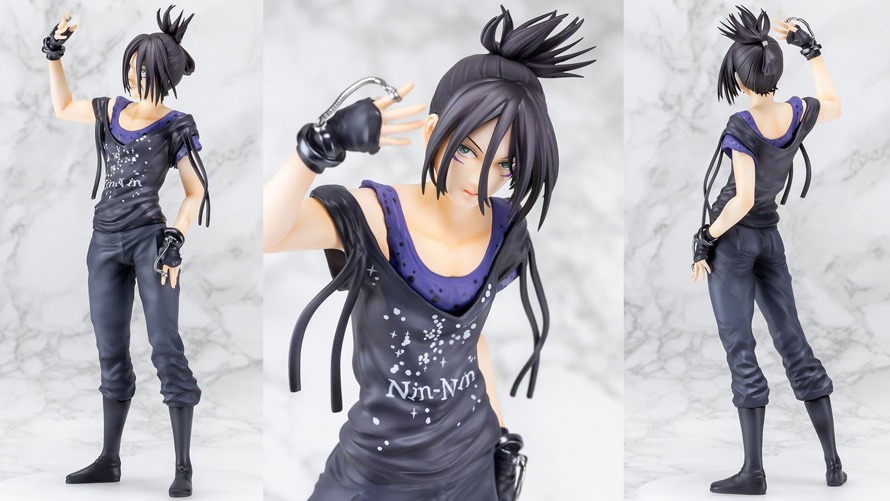 Here is our favorite assassin in the show arriving at number 3. Instead of geared up to take someone out or attempt to get back at our hero, here he is dressed for a relaxing day out. Could his t-shirt be a shoutout to a famous dragon slayer playing ninja so long ago? Who knows! What we do know is that we’ll let him enjoy his time off the clock.

Pros: This 9” figure is dressed in a style we usually don’t think of when we think of Speed-O-Sound Sonic. While it isn’t his assassin duds, he does look really cool in this regular wear. The metal coloring for his jewelry has a realistic shine to it. The colors still fit his motif of being able to blend with the shadows. His expression and posture show him to be in a state of not caring. He’s taking this day for himself, and no hero is going to steal it from him.

Cons: As of the time of writing, this figurine is only available for preorder. It won’t be released until February 2021. While the hairstyle is realistic, the bangs are sculpted to hide the detailed work on the face. His pose is also kind of weird. What exactly is he doing with his free hand? Is he trying to shade his face? Is he attempting to look cool? The positioning of that hand doesn’t exactly fit with the rest of the figure. 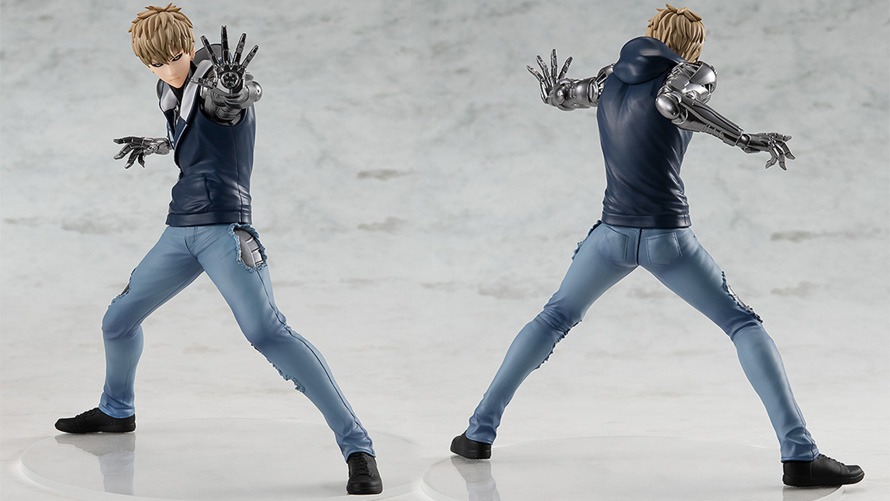 Coming in as our number 2 choice is the disciple of our favorite hero. The Demon Cyborg stands ready to defend his master or innocent bystanders from a foe. For fans of this sweet innocent soul, this is the choice for you!

Pros: This figurine is amazing! His dynamic pose and game face radiates the confidence you would expect from this character. The details are remarkable as well. He even has metal components showing through his ripped jeans! Also, his sleeveless hoodie is slightly unzipped so you can see his name on the inner lining as well as see the metal designs of his upper torso. That is really cool! That shows a love for the character right there! He also stands just under 7”, allowing for him to be a commanding presence without overwhelming your shelf. This product is also in stock at the time of writing.

Cons: As cool as this choice is, we do have a few nitpicks. The metallic paint used for the robotic parts doesn’t scream “metal”. It looks like someone tried to give the illusion of metal without the shine. Maybe a more metallic paint color or faux metal being used instead would give a more realistic look for this character. He also comes with a clear stand, but no other added background features. He also is not poseable. While it is a great pose, keep in mind that he will have his hand raised to fire forever, so maybe keep him facing away from important items.

1. Our Hero in Action 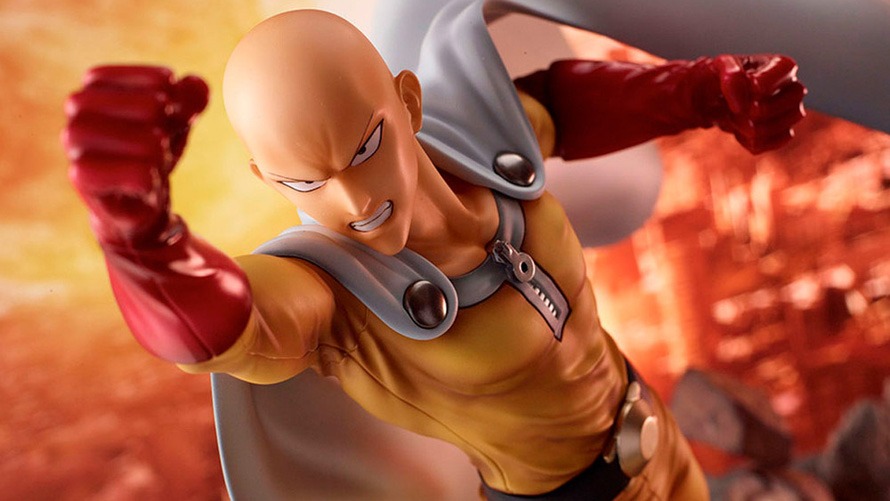 We at Otaku USA couldn’t think of a better pick for number 1. Here is our hero in action! Decked out in his iconic superhero suit, Saitama is ready to take down whatever foe he’s against in a single blow! Evildoers beware for you are no match to the might this statuette possesses!

Pros: This is the pick that you have to see to believe! The sculpt is so lifelike, or as lifelike as an anime character can be, I guess. Here is Saitama taking off to meet with a villain located high above. The ground has cracked beneath his feet. His cape billows behind him as his attention is on his target. You can feel the concentration radiating from his face. Then again that could be annoyance from the fact he may be late getting to the grocery store in time for the discount on eggs. The colors are vibrant while the pose is very dynamic! This piece shows how amazing his hero can be! It stands just under 14”, meaning this will surely stand out from the rest.

Cons: The biggest con for this piece is that it’s only available for preorder at the time of writing. You won’t be able to get your hands on this until November 2021. This also appears to be a solid piece, meaning that you can’t reposition him for different battle scenes. If these nitpicks don’t matter to you, then, by all means, place your order asap!

We all want to be a hero, and One Punch Man shows an impressive lineup of folks we would dream to become. However, we all know that Saitama is the best around. Nothing will ever get him down, except the fact that he’s overpowered. Show your appreciation for these amazing characters by including figures of them into your abode.