Tokyo Ravens is a Modern Take on Ancient Magic 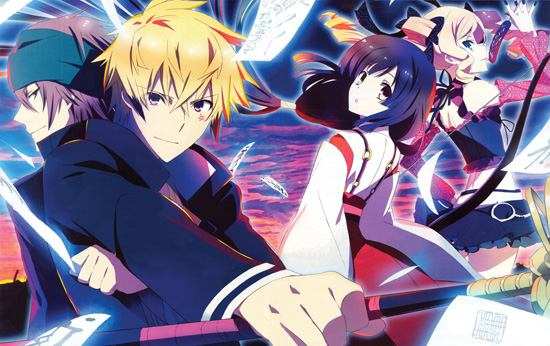 In the West, our exposure to highly exaggerated Japanese historical figures is mostly limited to some ninja, samurai, and the occasional Oda Nobunaga, but there’s another fairly big one: the onmyoji. These mystics, active between the 7th and 19th centuries, practiced “onmyodo” (which includes divination and exorcism) in the service of the imperial government.

Since the 1980s there has been a renewed interest in onmyoji in fiction, so we have anime like Tokyo Ravens, an adaptation of a light novel by Kouhei Azano (Black Blood Brothers) that’s all about young onmyoji in modern-day Tokyo. 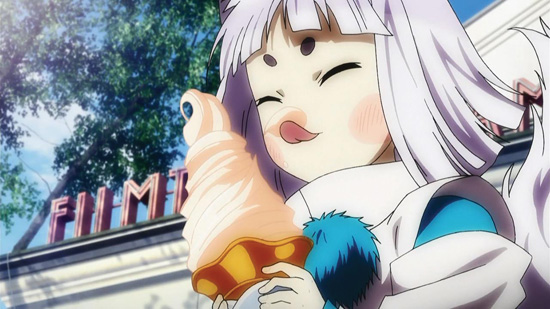 As befits a story about the ancient art of onmyodo, Tokyo Ravens is full of references to real historical figures and spiritual ideas pulled from taoism, Chinese philosophy, and Japanese mythology. Our hero Harutora is from a branch of the Tsuchimikado onmyoji family, presumably descended from the real-life family that once served as the authority on onmyodo. His distant relative Natsume is from the main family, making her the heir to the Tsuchimikado legacy. Harutora, born without magical abilities, is living a normal life in the countryside when Natsume shows up to take him up on his childhood promise to become her shikigami, or familiar. Soon the two are off to the elite Onmyo Academy in Tokyo, where most of the series takes place.

It’s not all schoolwork for the kids, however. Natsume is believed to be the reincarnation of Yakou Tsuchimikado, a powerful (and fictional) onmyoji active during World War II. Terrorist plots by a secret “Yakou devotee” society maintain a sense of danger throughout the series, even if the group’s motivations are never quite made clear. Unlike most light novels, though, Tokyo Ravens establishes a few clear villains, including a menacing, red-bespectacled Doman Ashiya, the real-life rival of legendary Heian-era onmyoji Abe no Seimei. 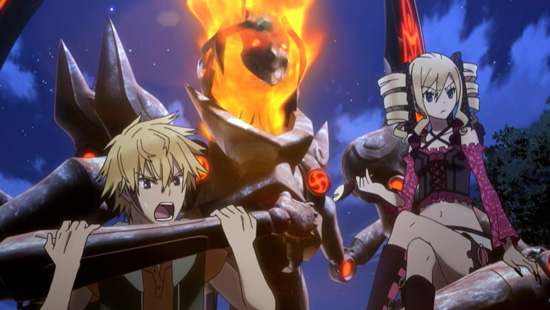 Most series of this ilk would also focus obsessively on the high schoolers, but a focus on their teachers and members of the government’s onmyo agency gives the story a slightly heavier, more mature edge, especially near the end when the adults’ political machinations come to a head. In fact, as predictable harem elements started to take root in the series, my one solace was Harutora’s badass homeroom teacher, who’s pretty much the onmyoji version of Kill la Kill’s Mikisugi.

Another unexpected twist: by tradition, the Tsuchimikado heir must be male, so Natsume must dress and act like a boy in public. Almost everybody, including Natsume and Harutora’s friends, believes that she is actually a he, resulting in some unique plot threads reminiscent of The Rose of Versailles (in fact, just like the main character in that series, Natsume has both male and female admirers at school). The plot device is by turns played for drama and laughs, like an episode in which two yaoi-obsessed dorm mothers believe that Harutora and Natsume are dating. 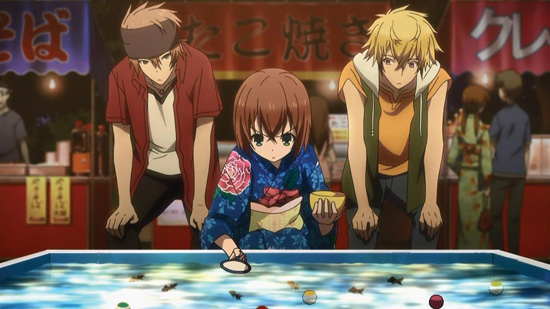 Those rare comedy filler episodes work a lot better than most of the core drama and action in the series, a common problem in light novels where the writing style emphasizes likable characters at the expense of compelling stories. I may not have gotten very invested in the drama, but I certainly laughed a few times while watching the series.

The magical action is also a little disappointing, in large part because turning onmyodo into an exciting anime experience is just plain difficult. Much of the original onmyodo is comprised of stationary, nonconfrontational practices such as divination, astrology, and summoning, and the reasoning behind certain spells is rooted in centuries of Chinese and Japanese spirituality. That may work in a novel but it doesn’t translate very well to fast-paced onscreen battles, though Tokyo Ravens features multiple attempts to find a happy medium. 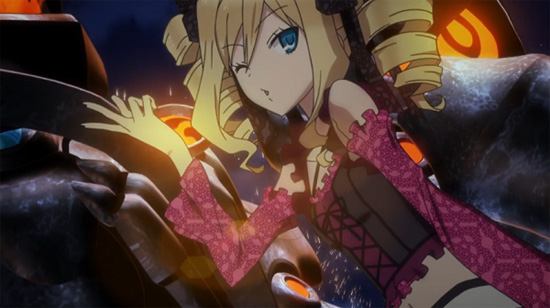 Characters breeze through cursory exposition before sending out spells, familiars are represented as various magical creatures including a stuttering cat girl and clunky 3DCG robots (of course), and onmyodo proficiency is explained simply in terms of channeling one’s “magical power.” It’s all close-but-not-quite digestible (at least for this American), hindered by the fact that it’s impossible to have your onmyodo cake and eat it too.

Either it’s a quiet, intricate art in which sorcerers conduct rituals to divine the future, or it’s a bunch of Dragon Ball energy blasts and giant robots. Trying to maintain the surface appearance of onmyodo without its complexities misses the key element of a fictional magic system: rules of engagement that your audience can easily understand. 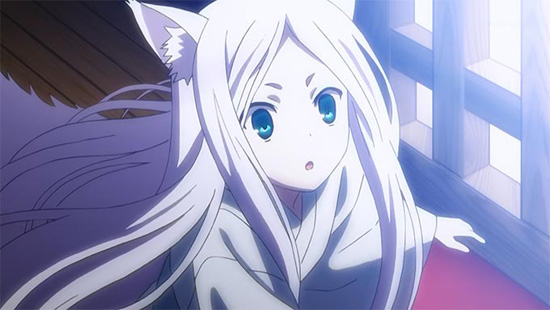 You might expect those battles to at least be visually engaging based on the show’s slick OP, which takes a couple cues from Attack on Titan’s second opening (not surprising, since From the New World’s Masashi Ishihama directed both OPs). Alas, the production from studio 8-bit (Walkure Romance, Infinite Stratos) looks nice enough all the way through, but there are only a few scenes showcasing any notable action animation or particularly well-timed comedy.

One cool visual quirk of the series is its character designs. Adapted from original novel illustrations by Sumihei, the animation designs from Atsuko Watanabe take vastly different approaches to female and male characters. Whereas the women closely resemble Watanabe’s bright, cutesy work on 2014’s Hanayamata, the men look more like something out of Black Butler, especially Harutora’s shady delinquent buddy Touji (these gendered designs make Natsume’s Clark Kent disguise especially hard to take seriously.) Appropriately, the Tokyo Ravens novels have been adapted not just into a shonen manga about the cute girls in the series, but also a shojo one about its cute boys. 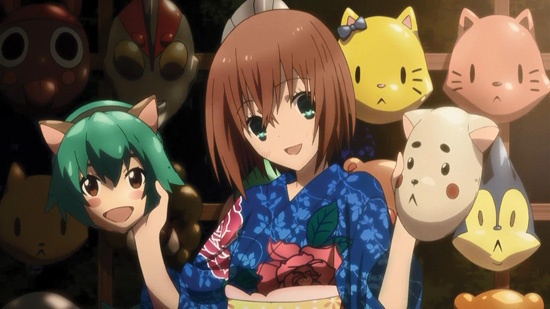 It’s always nice to learn more about ancient Japanese customs like onmyodo through anime (I praised Red Data Girl in this very magazine for incorporating similar themes). Unfortunately, Tokyo Ravens leans a bit too far toward the “anime” and away from the “onmyodo” for my tastes. As usual for all but the best light novel adaptations (i.e., Baccano! and Kino’s Journey), Tokyo Ravens is a watchable series that maybe could have been so much more.