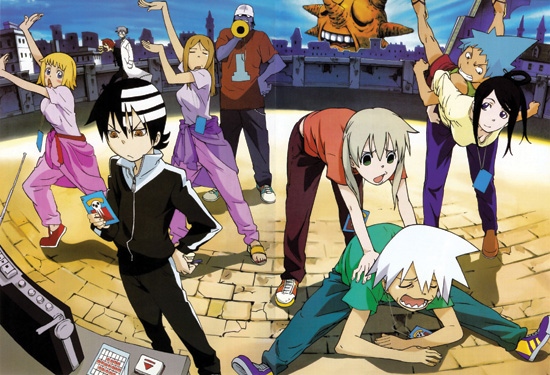 A sound soul dwells within a sound mind and a sound body, or so the saying goes. Unfortunately for the average person in Soul Eater, there are creatures that want to devour these sound souls, and they’re willing tear the body and rend the mind to do so. Soul Eater presents a world in which witches and monsters are on the prowl for human prey, and the first line of defense against supernatural evil takes the unlikely form of Lord Death, the literal grim reaper.

So what does an enterprising death-god do to protect the world from the threat of things that go bump in the night? Open a high school, of course! The Death Weapon Meister Academy, or DWMA for short, is a peculiar trade school for training new generations of witch hunters and monster slayers. Here an elite class of students who can shape-shift into weaponry are paired with the Meisters who will wield them in battle. Together, the Weapons and their Meisters must foil the witches’ wicked experiments and prevent the resurrection of the Kishin, a being of supreme evil and infectious madness. 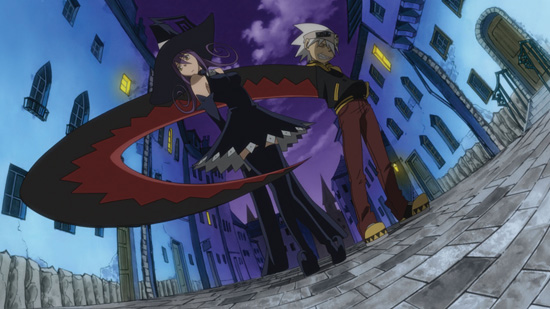 The protagonist of Soul Eater is Maka Albarn, a second-generation Meister at the DWMA who is also the daughter of one of the seven Death Scythes charged with safeguarding the world. Maka intends to elevate her partner, Soul Eater Evans, to Death Scythe status by collecting 100 Kishin-corrupted souls along with the soul of a witch. She’s joined in this goal by her classmates, Black☆Star and Death the Kid.

Black☆Star is the last descendant of a reviled clan of assassins, and his partner, Tsubaki, is a Weapon capable of transforming into numerous ninja-themed forms such as a smoke bomb, a shuriken, and a kusari-gama. Black☆Star is a loudmouthed braggart who often ruins a stealthy entrance with shouted speeches about how one day he will surpass the gods, but his hand-to-hand fighting skills are practically unmatched. Death the Kid is the son of Lord Death. He fights alongside Liz and Patty, the Thompson sisters, who transform into a pair of matching pistols. Death the Kid’s inherent supernatural power is dampened by a dedication to neatness that borders on the obsessive-compulsive. 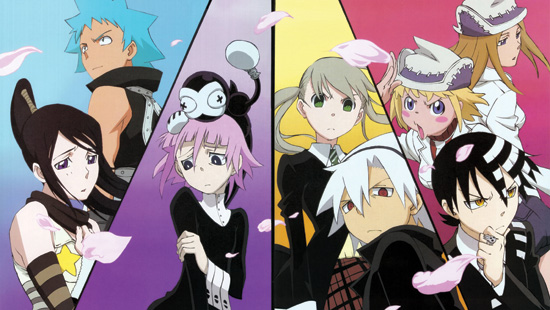 Soul Eater also has a cast of other colorful characters, including but not limited to: a spell-slinging, kung fu-fighting werewolf; numerous witches with unique animal totem themes, such as the treacherous Gorgon sisters, Medusa and Arachne; Sid, a DWMA instructor re-animated as a zombie; Crona and Ragnarok, the Demon Sword duo joined together by the unholy power of enchanted black blood; and Franken Stein, a gifted but unhinged Meister who returns to the DWMA as an instructor and who constantly threatens to dissect his students as part of their studies.

Soul Eater is filled with some of the most thrilling, dynamic action sequences I’ve seen in an animated television series. Whether it be Maka and Soul mastering the Genie Hunter attack, any of Black☆Star’s clashes with the samurai bodyguard Mifune and his Infinite Sword Technique, Stein dueling with Medusa, the confrontations between Lord Death and the Kishin Ashura, or even the escapades of minor characters like Ox Ford and Kilik during the battle to reclaim the Brew, Soul Eater features the kind of imaginative, high-concept encounters that make you want to stand up and cheer. 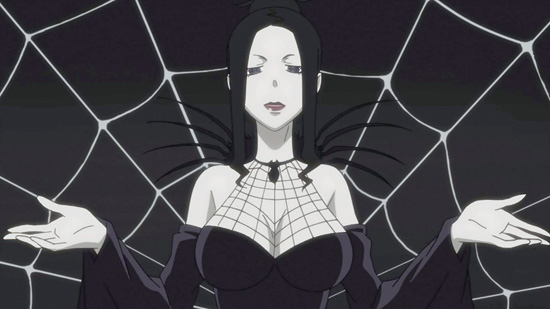 Soul Eater isn’t only about kicking butt and taking names, though. Soul Eater is a shonen action show, and few shonen action shows can resist the temptation to include fan service and broad physical comedy. Thankfully, Soul Eater doesn’t overdo it with either of these elements. There is fan service, but it’s mostly confined to the character of Blair, a magically gifted, shape-shifting cat who, in her human form,provides the cleavage into which Soul can inadvertently face-plant. There’s the requisite violent slapstick when Maka punches Soul for face-planting into Blair’s bosom, and there’s also the occasional ecchi nosebleed. But while this kind of humor is juvenile, it doesn’t detract from the show in any significant way.

Other examples of Soul Eater’s situational comedy, such as Death the Kid’s crippling neuroses or Patty’s bizarre antics with paper-craft giraffes, are much better at tickling the funny bone. No discussion of Soul Eater’s sense of humor would be complete without mentioning Excalibur, the legendary sword once wielded by King Arthur that can grant its bearer nearly limitless power. I won’t spoil the surprise except to say that in the Soul Eater anime, Excalibur is not the hero we want, but rather he is the hero we deserve. 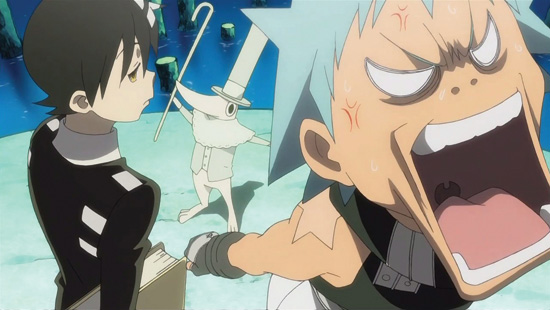 Neither the action nor the humor of Soul Eater would succeed if the show didn’t look and sound so cool. The animation by Studio Bones is excellent throughout. Shihoko Nakayama deserves special praise for the color design; Soul Eater uses a vibrant color palette to create its strange, spooky atmosphere and to reinforce psychological states of being, especially states of madness and creeping horror.

Overall the show has a palpably Western influence, not just in the presentation of the witches and the monsters, not just in the nods to famous American horror films, but also in the improbable architecture of the DWMA and in the numerous locations that the Meisters visit in their efforts to stop the revival of the Kishin. The show evokes a strong visual aesthetic with its purple skies at night beneath a leering and blood-soaked crescent moon. Soul Eater also creates an excellent sonic landscape with its music and sound design. 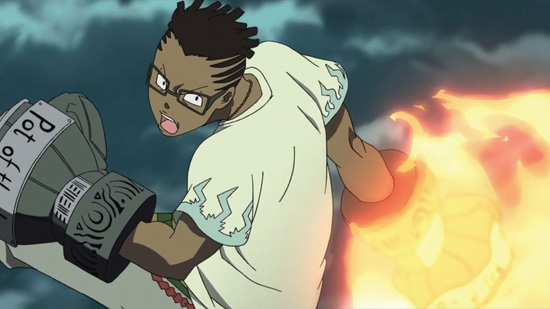 Other critics have already spilled plenty of ink detailing how the Soul Eater anime strays from storyline of the original Soul Eater manga by Atsushi Okubo. Some of this is unavoidable since the anime was produced in 2008 and 2009, while the manga didn’t conclude its run until 2013. I can’t speak to the differences since I haven’t read the manga, but I can speak to the conclusion of the Soul Eater anime.

Far too often an anime series (especially a shonen action anime series) will run out of steam during the final act. This is most often the result of rushed production schedules and dwindling animation budgets. Soul Eater sidesteps this trap and remains consistently good throughout. The conclusion and the denouement of the Soul Eater anime are adequate. The ending may not be mind-blowingly original, but it gives me everything that I require to be satisfied and it leaves me with the warm feeling of seeing the characters that I care about accomplish a worthy goal. 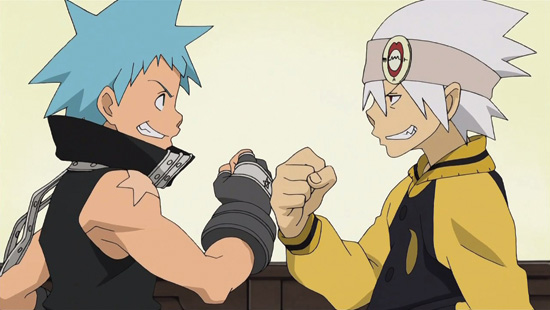 Not every story needs to be an earth-shaking, philosophical experience whose themes force the audience to reconsider their perspective on life, the universe, and everything. Sometimes a simple tale of heroes who triumph in the face of adversity is sufficient, and Maka and Soul are two such heroes. In a medium where so much that is produced is just empty calories, Soul Eater is a show that I’ve consumed in its 51-episode entirety on no less than three occasions.

It’s not likely to revolutionize the medium. It’s not likely to shatter anyone’s expectations. It’s not a six course gourmet meal, but it is comfort food—chicken soup for the soul, if you will pardon the pun—and so Soul Eater is a solid addition to the collection of any anime fan who likes heroic action with a taste of the sinister and the macabre mixed in.

[This story was originally published in the December 2014 issue of Otaku USA Magazine.]