That’s Metal Skin Panic: MADOX-01 for you, another one-shot OVA from those halcyon days of yore, the Nineteen Eighties, when anime didn’t have to make sense and when dedicated animators poured their blood, sweat, and tears into making sure every cel of a firing howitzer looked ju-u-u-u-ust right. 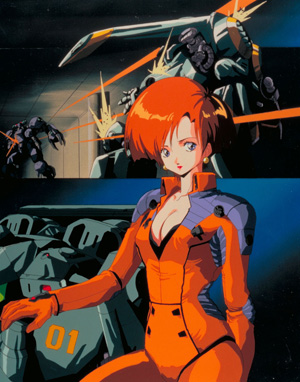 The premise is simple: a top secret, experimental prototype weapon—the MADOX-01, a powered armor suit developed in conjunction between the U.S. Military and the Japanese Self-Defense Force—goes missing as a result of a traffic accident during its transportation through the outskirts of Tokyo. This walking arsenal winds up in the hands of Kouji, a part time mechanic working to pay his way through technical school.

Like any red-blooded Japanese male would, Kouji dons the powered armor suit without reading the instruction manual… accidentally activating its automated “scramble” mode and propelling himself on rocket-powered wings into a whole heap of trouble. With the JSDF and a bloodthirsty, tank-crazy American soldier (appropriately named Lt. Kilgore) closing in, Kouji must save his own skin and navigate the crowded streets of Shibuya, because regardless of what obstacles he faces, Kouji is a man on a mission:

His girlfriend is leaving to pursue an education in England, and he doesn’t want her to break up with him without a chance to say goodbye.

MADOX-01 is not the nuttiest thing directed by mechanical designer extraordinaire / director Shinji Aramaki.  Aramaki is best known in the U.S. for his Transformers designs, his conceptual artwork on Soul Eater, and his work on the CGI Appleseed theatrical films, the latter of which features a cyborg wearing a tuxedo. No, what leaves the hardcore mecha enthusiasts cold when it comes to MADOX-01 is the jarring juxtaposition of the speculative and the prosaic. In the MADOX-01 prototype, the military science fiction fetishists see a plausible “real robot” suit, something that could conceivably exist with only a few additional advancements to modern technology. The opening reel of the OVA features this bad-ass mecha dismantling a trio of American tanks in a lovingly animated combat sequence, an exercise staged to demonstrate the unit’s potential as an implement of urban warfare. 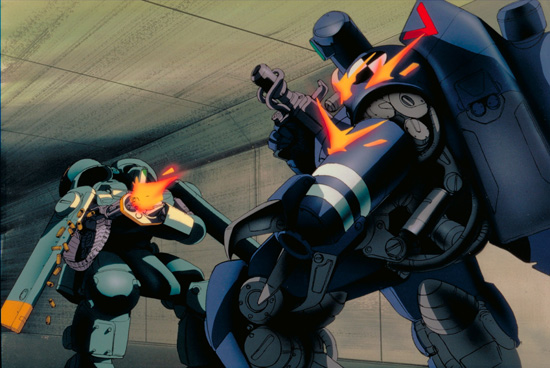 The rest of the OVA features Kouji doing remarkably mundane things after donning the armor: he blows up his apartment; he crashes face-first into a convenience store; he buys a fried shrimp dinner from the bemused clerk; he sits on a park bench trying to eat his meal using the suit’s combat-calibrated manipulators, which aren’t ideal for wielding wooden chopsticks. The general populace blithely accepts the presence of this rampaging robot suit without batting an eye, regardless of whether it’s blasting down the highway via its built-in jetpack or knocking Apache helicopters out of the sky. Only in Japan…

The stakes in MADOX-01 are remarkably low. The weapon’s developers are convinced they’re dealing with Eastern Bloc terrorism, but it’s really just a joy-riding kid. Lt. Kilgore—a villain of such cartoonish aggression that he might as well have “Section Eight Discharge” tattooed in purple on his forehead—supersedes his orders and runs amok in crowded skyscrapers with an experimental tank just because he feels slighted by this new technology. And Kouji doesn’t want his girlfriend to dump him. It’s all very low key, despite the explosions and the anarchy, and that’s what makes Metal Skin Panic: MADOX-01 such a charming little show for me. In a subgenre dominated by grimness and moral uncertainty, it’s nice when a show doesn’t take itself too seriously. 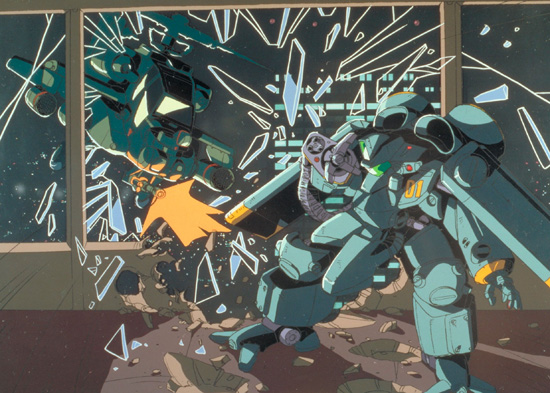 Originally created in 1988, Metal Skin Panic: MADOX-01 was the first anime title licensed and released by the then fledgling American distributor AnimEigo, who brought us such other luminary features as Bubblegum Crisis, Oh! My Goddess, and Bomber Bikers of Shonan. (Okay, that last one was a joke. Zac Bertschy has Heat Guy J; I have Bomber Bikers. 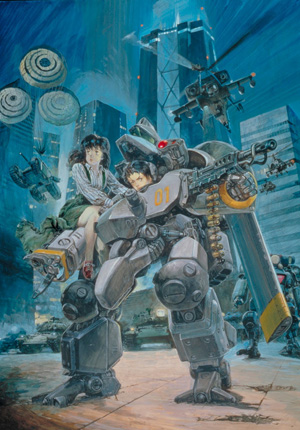 Indulge me. Titles and companies have come and gone, but AnimEigo and MADOX-01, like the coelacanth, stubbornly refuse to go extinct. As of this writing MADOX-01 is still in print, available directly from AnimEigo’s website for a measly eight smackers. I think it’s worth the price, especially for the supplementary interview in which AnimEigo CEO Robert Woodhead admits that he founded the company “as a joke” and that he passed over licensing Project A-ko in favor of MADOX-01 because he thought the latter would resonate more with the fans.

I love MADOX-01. I even had my 2003 DVD copy signed by Shinji Aramaki himself, who seemed genuinely pleased that someone remembers his earliest directorial effort. Godspeed, Aramaki-sensei! May the wings of your rocket-powered robot suits never lose a heat capacitor!