The Vault of Error: Blood Reign

Let us journey backwards through the misty veils of time to a far off, foreign place: the demon-plagued realms of Japan during the Sengoku Period, where the samurai prey upon the peasants, the ninja prey upon the samurai, and demons and devils prey upon everyone. I speak of Blood Reign: Curse of the Undead Yoma, a strange little horror tale in which life is cheap, death is ever-present, and sometimes the only way to save your best friend from transforming into a demonic werewolf-centaur is to punch him with your iron claws.

When the leader of the Takeda clan is slain by demons, the clan’s ninja retainers must keep the knowledge of his death from falling into the hands of the enemy. But when Marou—a conspicuously blonde-haired, blue-eyed shinobi—goes rogue and flees the safety of the village for reasons unknown, it falls to his childhood companion Hikage to track the renegade ninja down and slay him to protect the clan’s secrets. However, Marou is nursing secrets of his own: he is really a demon-child, born from the blood-soaked earth of the battlefields, and he is destined to be reincarnated as Kikuga no Miko, the king of the Yoma, and to plunge Japan into eternal darkness. 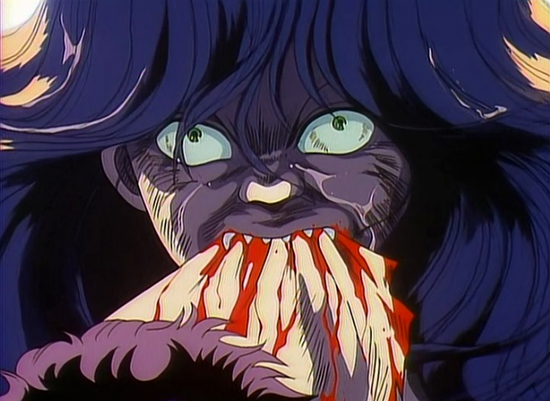 In the first OVA, Hikage in an Evil World, the search for Marou leads Hikage to a remote village in the mountains where the townsfolk have lost their memories: they spend their days laughing and gossiping and drinking, their cares forgotten. But something evil lurks within the forests that wreath the town, something with fangs capable of tearing a ninja wide open, and Hikage soon discovers that sometimes demons come with eight legs and a bad attitude. Will the Yoma triumph? Will Marou be reborn to rain terror and damnation upon the land? Or will Hikage punch some hideous spider-monsters in the mouth with his iron claws?

In Marou with the Crazy Fang, Hikage joins forces with a lady shinobi named Aya to square off against Majumi no Miko, the Yoma lord of the sea. What terrifying form does this monster assume? Well … he’s a sea horse. No, not the amusing fish that serves as the mascot of Tatsunoko Productions, but rather a literal horse that lives in the sea. Majumi is a very bad horse indeed; he rides across the nation, a thoroughbred of sin, trampling ninja under his iron hooves and feasting on human flesh… at least he does until Hikage punches him in the mouth with his iron claws. 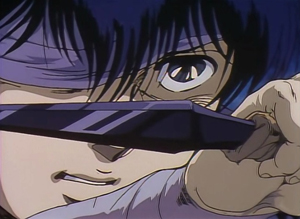 All silliness aside, I enjoy Blood Reign: Curse of the Undead Yoma. It’s one of only a handful of horror anime titles that have made their way to American shores, and the strangeness of the subject matter, the atmosphere of the war-torn, demon-haunted world, appeals to me. Ninja are often portrayed as having supernatural powers in Japanese pop culture, and to square them off against a truly otherworldly threat seems a natural choice. I love the sense of psycho-geography that pervades Blood Reign, for in these OVAs the world itself has gone mad, transforming into a psychedelic backdrop that blurs the boundaries between the lands of the living and the dead. In Blood Reign, the days are a burnt umber blasted by an angry sun; the nights are rife with purple shadows and ghastly greens. The very environment is menacing, each rock and tree alive with goblin-faces that seem to smirk at the thought of drawing human blood.

There’s something refreshing about a product that is unconcerned with the rigid structures delineating Western cinema, where the intricacies of the plot take a backseat to evoking a sense of mood and atmosphere. It doesn’t hurt that Blood Reign is brimming with brutal violence and a bizarre, ethereal, homoerotic tone. Hikage’s obsessive quest to find and reclaim his friend almost contains a sense of a romantic longing. I’d argue that Blood Reign’s greatest strength, though, lays in its sound design. Whether it is the skittering of spidery legs, the squelch of bloody mud squeezed between fingers, or the bone-snapping crunch of bodies rent asunder, the audio tracks capture all manner of disturbing sounds. Coupled with the “Yoma Counting Song”, a haunting lullaby laced with lyrics of carnage and despair, Blood Reign creates a sonic landscape designed to unnerve. 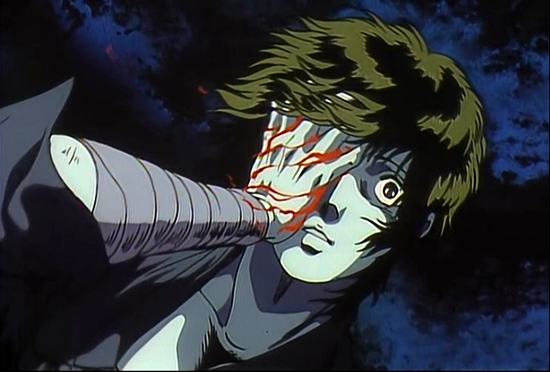 Lastly, I enjoy the themes that Blood Reign plays with, themes of cyclical history, disjointed time, and reincarnation. Is Aya the lady ninja the same Aya that met a tragic fate earlier in the village of the spider-demons? Is humanity doomed to continually draw the Yoma forth from the darkness with their hatred and their fear and their despair? How many times must Marou reincarnate before he can make peace with his destiny? The answers remain obscure, as murky as the storm-wracked sky that drowns the light of sun and moon alike, as uncertain as the restless rustlings of the unquiet dead.

Originally released in 1989 from Toho Studios, the most recent DVD pressing of Blood Reign dates from 2004 as part of the undead ADV Film’s Essential Anime Collection. I’ve owned this DVD for seven years, and I have no plans to part with it. If your tastes skew toward ninjas or zombies, you’re sure to find something in this strange trip to whet your monstrous appetite.

I Want To Bite
Countdown to TOKYO GAME SHOW 2011