The Bizarre Politics of Gasaraki 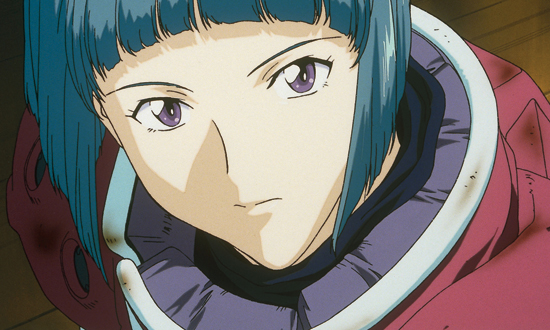 You can read my formal review of Right Stuf’s Gasaraki re-release in the January 2012 issue of Otaku USA magazine, but I had a few more things to say on the topic that wouldn’t fit into a 650 word review.

In case you haven’t read the magazine (and why not? You like this website right? The magazine is even better…), Gasaraki is a mech series from 1998 directed by the great Ryousuke Takahashi, who is fondly remembered as the creator of VOTOMS. I learned the importance of VOTOMS to early American anime fans by reading Colony Drop’s zine. Back in the days before fansubs, VOTOMS episode guides were all the rage at anime conventions.

Gasaraki got an expensive DVD release from ADV in 2002, and to this very day you can still pick up the clunky eight volume set used on the Internet cheaply. But that doesn’t mean you’ll like it…

Put simply, Gasaraki is more or less the opposite of Code Geass. In Gasaraki, ugly characters fight present day political battles with realistic mobile suits. Rather than bright colors and sexy girls joking around, the average looking ladies in Gasaraki (when there are ladies, which is rare) fight dead-serious battles in very dark and muted colors. 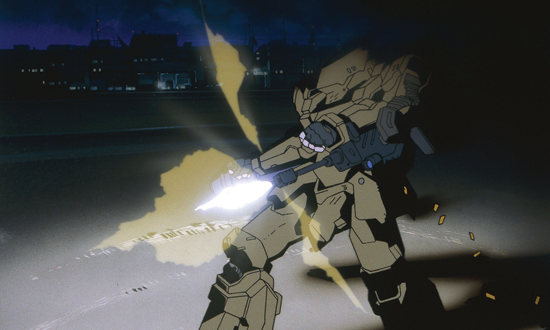 If Geass was designed to appeal to a broad audience of young people, Gasaraki was designed to appeal to a narrow audience of older men. Gasaraki isn’t kids stuff, in fact it isn’t even for the robot market it seems directed at; no, it’s a Japanese bureaucrat’s sci-fi fantasy. Indeed, the characters are inspired by a stoic apparatchik, Mr. Nishima, whose extreme right wing views motivate him to pull strings behind the scenes in order to bring the old ways back to Japan. He’s a man of such pure (and kooky) ideals that he blinded himself with a samurai sword because he couldn’t stand to see the direction Japan was moving in. In other words, Mr. Nishima is disgusted by foreign influence. 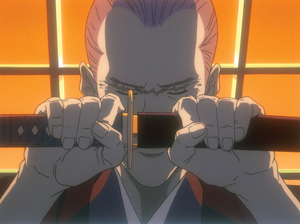 Gasaraki is an intensely political show, especially in the final third of the series, as Mr. Nishima (and he’s not even the protagonist, the protagonist is arguably Gasaraki’s pilot, Yushiro Gowa) attempts to cause a financial crisis by manipulating the price of wheat on the stock market. It doesn’t make for exciting viewing if you don’t know much about stock trading. And if you do know something about stock trading, it makes for some serious eye-rolling and much monocle-popping. Nishima radically (and obviously) overestimates Japan’s ability to tilt world markets. He thinks that by flooding the American market with cheap wheat crops, he can crash the stock market, and therefore collapse the entire world’s economy. What, really? As goes the wheat market, so goes the world? His farfetched scheme serves to highlight that in the narrow-minded mythos of Gasaraki there seem to be only three countries in the entire world (despite the existence of the United Nations): Japan, America, and the stand in for a godforsaken third-world country “Belgistan.” Only Japan and America seem to count for anything. No other super powers or first world countries are offering up weapons technologies in the near future of Gasaraki. 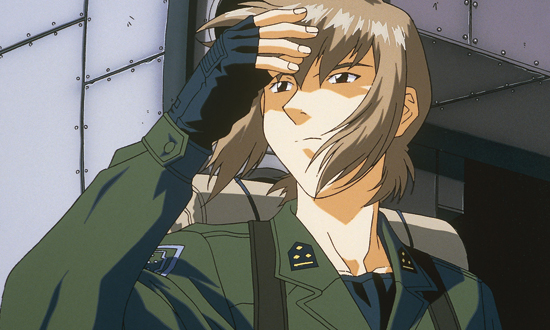 Some of the Belgistan storyline eerily predicts what eventually happened in Iraq. Weapons of mass destruction (in this case, advanced mechs) are hidden in Belgistan by a mustachioed dictator and become the impetus for an invasion. When the assault actually takes place, though, it just continues to demonstrate how disinterested Gasaraki is in satisfying military SF fans (who might otherwise be its target audience). Despite being a future war, fought with futuristic bells and whistles, it winds up being a tank battle fought in the style of the 1916 Battle of the Somme. No [military] thought went into the execution of these scenes, not even the slightest nod to the present realities of war (even circa 1998), with no air or satellite support for this poor beleaguered tank battalion who are quickly eliminated by the onslaught of mechs. The purpose of this scene is to demonstrate how fearsome these new mechs are in combat, but instead it does nothing but highlight how ham-handedly the world of Gasaraki has been developed. 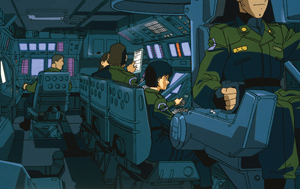 Ultimately, Nishima’s plan is to get Japan out of its deep recession by throwing it into a depression. As the wizened statesman explains in one of his many extended metaphors, the country is like an old diseased tree that needs to be burned down completely. You know, screw it. Grow a new tree. Nishima believes that if the people are desperately poor enough, they’ll revert to traditional culture, bringing back the samurai feudal system… and this guy is set up as something of a hero in Gasaraki, whose ultimate failure to bring on global catastrophe (this time by, er, literally blowing up the Japanese stock market) is blamed not on his harebrained schemes, but rather on his too, too pure idealism. This, in contrast to the far more pragmatic America, to whom he ultimately concedes victory.

Thus Gasaraki seems to have been intended as cold comfort for the legions of functionaries still reeling from the burst of Japan’s Bubble Economy. Sure, they may just be going through the highly ritualized motions of running a country whose glory days have passed, but at least they had principles! Unfortunately, as Gasaraki clearly demonstrates, principles alone don’t make a good anime; you also need a compelling plot, complex characters, interesting designs, etc., etc…