The Anthem of the Heart Anime Film Sings a Beautiful Song

As a young child all Jun Naruse wanted was to realize her dream of attending a grand ball at the majestic castle on the hill. One day, when she saw her father escorting another woman from said castle, her heart swelled with excitement. He must be a prince! And even though mommy’s not with him, maybe she was simply too busy cooking to attend the ball. When she breathlessly relays this story to her mom, though, it’s not met with the same enthusiasm. Next thing she knows dad is out of the house for good, and to top it all off he explicitly blames her for everything. 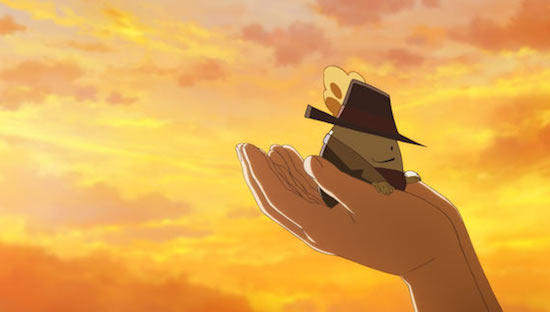 It’s on this melancholy note that The Anthem of the Heart -Beautiful Word, Beautiful World- begins, and Naruse’s childhood chatterbox ways are quickly shattered. Since blabbing all the time is apparently what got her into this, she takes the sage advice of a mysterious “Egg Fairy” and seals her words away, never to speak again. Flash forward to high school, where Naruse is in her second year and as silent as ever. Some cracks begin to form in her shell, however, when her homeroom teacher signs her up with a few students as members of the Regional Friendship Exchange Executive Committee. Once it’s decided that they’ll put on a musical as part of the community outreach program, Naruse learns that while she may bottle up the words she speaks, her heart is able to reveal its many truths through song.

Aside from the looming musical itself, one of the main catalysts for this change in Naruse is fellow classmate Takumi Sakagami. There’s something about him that both intrigues and irritates Naruse; the way he acts and the things he says give her the impression that he’s peeking into her heart. Even if that’s not really the case, he cracks her shell further as their friendship develops. She tells him everything. She tells him about her father, how an egg sealed away her words, and how she’s been cursed by this in such a way that she gets a crippling stomachache whenever she tries to speak. Rather than drive him away, the unraveling truths in Naruse gradually push Sakagami to reveal his own. 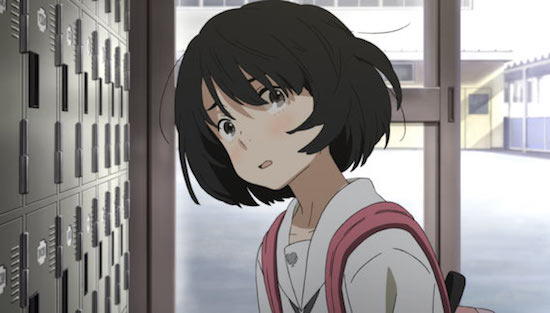 From there it’s infectious, spreading through the film’s fully-developed principal cast like some kind of airborne truth serum. The Anthem of the Heart isn’t just about a girl who has almost completely lost the ability to speak, it’s about anyone who can’t seem to say what’s on their mind and in their heart. It’s about finding your own way to break through, and it’s told through lovingly animated characters and a fittingly beautiful soundtrack. Director Tatsuyuki Nagai (anohana: The Flower We Saw That Day) and writer Mari Okada (Lupin III: The Woman Called Fujiko Mine) manage to make the film come off as very natural in its portrayal of burgeoning friendships and relationships both new and old. Between the spirited songs are punctuations of thoughtful silence, lending more weight to the events happening around and within Naruse.

The moment the musical is introduced it’s pretty clear what we’re in store for with The Anthem of the Heart. You know you’re going to get a third act performance interwoven with just the right amount of drama, and at the halfway point you’re more or less just bracing yourself for any waterworks that may erupt as a result. The journey there is well worth taking.

Distributed by Eleven Arts, The Anthem of the Heart kicks off its limited North American theatrical run on November 1.