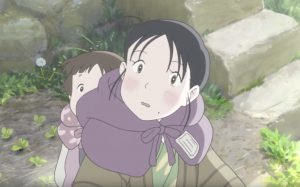 The heartbreaking anime adaptation of Fumiyo Kouno’s award-winning In This Corner of the World manga is a must-see film, and even those who have already watched it will want to do so again when it returns to theaters later this year. The official website announced plans to release an extended version—titled In This Corner (and Other Corners) of the World—in Japan on December 20, bringing with it 30 minutes of new footage.

The extra additions were originally planned to be showcased in December of 2018, but more production time was needed to complete it. There’s currently no word on plans for a release outside of Japan, but you can see a new teaser below.

Some of the new scenes include more on the relationship between protagonist Suzu and Rin Shiraki, as well as a sequence covering 1945’s devastating Makurazaki Typhoon.