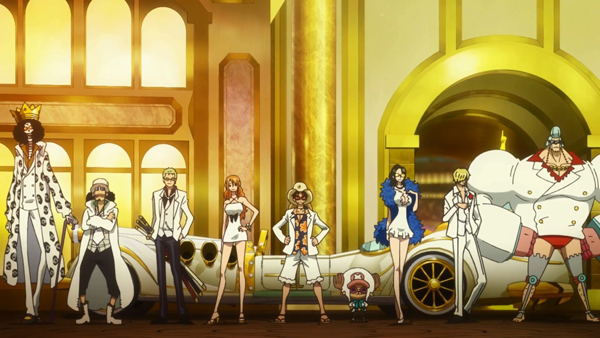 Luffy and the Straw Hat Pirates find themselves more powerful than ever yet still their gullible and goofy selves in One Piece Film: Gold, their 13th leap to the silver screen (and first since 2012).

Maintaining the thrills and visual excitement of some of the biggest moments and battles of the anime, One Piece Film: Gold surpasses most anime adaptations with a commitment to please thanks to the steady hands of executive producer and series creator Eiichiro Oda and direction by longtime One Piece helmer Hiroaki Miyamoto.

Rather than following a completely original narrative like previous films Z and Strong World, One Piece Film: Gold emulates and condenses the typical story-arc structure seen in such arcs as Thriller Bark and Punk Hazard – to varying degrees of success. Maintaining a brisk pace and light tone throughout, Gold manages to accomplish the goals of any good summer popcorn flick, filling its two-hour runtime with laughs and large-scale action set pieces. 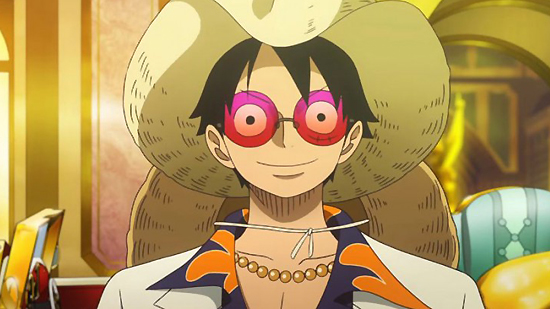 Having been plagued with less-than-acceptable animation for years now, witnessing the full powers of the Straw Hat Pirates gloriously animated with visually-kinetic camera work on the large screen is blissfully entertaining. The laughs come fast and furious with visual gags and well-timed punchlines. However, non-fans of the show might find deficiencies in what one could normally expect from a typical story set up such as Gold’s.

After a impressively-orchestrated battle to introduce and show off the Straw Hat Pirate Crew, a 10 kilometer-long pirate ship named Grantesoro seduces the crew with its sin city atmosphere and gold-plated, well… everything. The crew is loaned a couple million “Berries” to gamble in the casinos and turtle car racing activities, but the Straw Hats soon find themselves baited into a 320 million-berrie debt and a countdown to repay the money before the execution of fellow crewmate Roronoa Zoro.

This launches the story into a Lupin the 3rd/Ocean’s Eleven heist scenario and introduces some side characters, who, while amusing, never truly get a chance to develop. These newbies initially feel like they might bring the depth and complexity normally seen from the strongest of One Piece’s secondary characters, but without a chance to shine in the full focus of the story, they come out a bit half-baked. 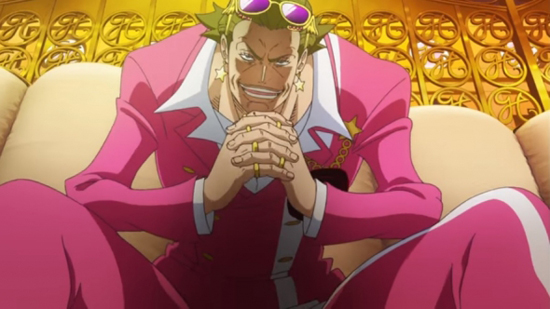 Specifically, the hinted-at backstory of the central antagonist has the makings for one of the most multi-dimensional adversaries of the series, but, unfortunately, never materializes into anything other than a few brief glimpses at a tortured past. Some brief cameos may also leave newcomers momentarily lost (even Luffy fails to recognize a former foe) but nothing significant occurs in these encounters.

In the end, Gold becomes more of a showcase for the crew fans are already familiar with. Clocking in at one minute short of two hours, Gold is unusually long for an anime film, but if anything, the film probably could have benefited from a slightly longer running time to flesh out these side stories and give more weight to a few emotionally-flat character moments.

However, this lack of character building is a missed opportunity rather than a fatal misstep. The overall upbeat attitude, comedy, and hot-blooded action culminate in a pretty spectacular climax that is on-par with any large-scale skirmish the series has had thus far. By focusing on all the elements that make One Piece so beloved in the first place, Gold has more than enough to satisfy fans.