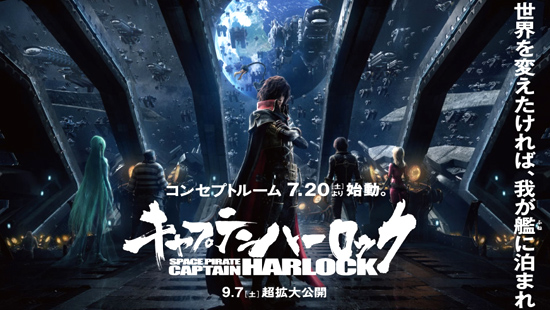 Like him or not, it’s clear director Shinji Aramaki is at the forefront of Japan’s 3D, computer-generated animation movement. Beginning his directorial career with traditional, hand-drawn anime OAVs like Megazone 23 and MADOX-01, Aramaki turned to computers to create 2004’s Appleseed. Since then, he’s directed a handful of CG features, including a sequel to Appleseed and a Starship Troopers film.

But in the world of computer animation, Space Pirate Captain Harlock represents Aramaki’s most significant achievement yet.

Made at a reported cost of 30 million dollars, Harlock, the new feature film adaptation of Leiji Matsumoto’s classic manga, is one of the best looking films of its type.

It’s a beautiful picture. Motion is fluid, facial expressions and details are impressive (look at all those pores!) and the Arcadia lances through space with a feeling of real weight and strength. A far cry from last year’s clunky Starship Troopers, Harlock proves that when equipped with a decent budget, Aramaki is the man in Japan when it comes to this type of animation.

But how does the film fare from a storytelling standpoint?

In assembling the story, Aramaki and screenwriter Harutoshi Fukui have culled bits and pieces from various Harlock timelines (and plenty of their own ideas) to create the world of the film. In the future, humans have spread throughout the galaxy, but failing to thrive there, wish to return home. Realizing, however, that Earth could never support such a huge population influx, its defenders battle to keep the returning ships away in a brutal Homecoming War.

They win, establishing Earth as a sacred zone not to be touched, but one man continues to fight for the right to return: the mysterious, immortal Captain Harlock, who commands a loyal crew aboard the pirate ship Arcadia.

The premise is solid; the execution, not so much. While Harlock features some pretty cool scenes, they seem to simply come one after another, with no real cohesion. There are quite a few “wait, now why is this happening?” moments.

Part of the problem is weak characterization. The main characters, including a rookie member of the Arcadia crew named Yama (though strangely named Logan in the subtitle script – maybe they intend to westernize the names in the dub) and Harlock himself, seem to have no real motivation. Characters double- and triple-cross their allies, change their minds at random, and act inconsistently from scene to scene. 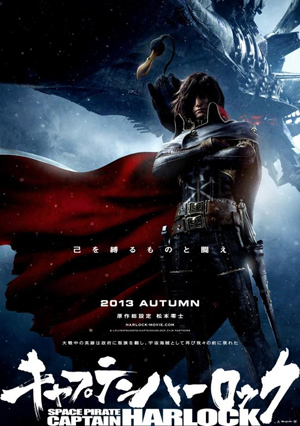 It all feels as though Aramaki is more interested in pushing forward to the next plot point, and the characters are simply fodder for that task.

Another problem is how generic the film feels. Though it’s slick and well-directed, many of its twists and turns will be pretty familiar to fans of anime or sci-fi films. This doesn’t feel like a Harlock movie, I found myself thinking more than once during the film.

On the other hand, what does Harlock feel like? The original ’78 series? The other major film, Arcadia of my Youth, or the series sharing the same name? Perhaps the OAV series from the 90s? That’s not even mentioning Harlock’s appearance in other Leiji Matsumoto works, or alternate reality series like Gun Frontier.

Truth is, Harlock is a fluid character, changing with every adaptation. More than a three-dimensional, human character, Harlock acts as a larger-than-life symbol who can be used to tell a variety of tales. So denouncing the film as “not Harlocky” may be a bit silly.

Taken on its own, though, Harlock doesn’t quite cut the mustard. It’s beautiful to look at, but never fully clicks dramatically.