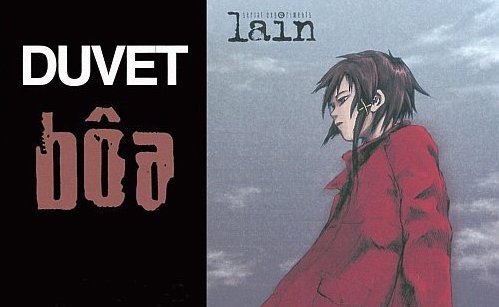 It’s been 20 years since the cyberpunk classic Serial Experiments Lain hit the airwaves. The dark, innovative series was great for too many reasons to list here (and, y’know, we did this a few months ago) but one was the opening theme song: “Duvet” by British band Bôa.

In celebration of Lain’s 20th, “Duvet” is getting a brand-new 7” single release in Japan this week. The record contains four takes on “Duvet”: the original, plus TV size, acoustic, and Cyberia Mix versions.

Recent years have seen a number of anime and game OSTs released on vinyl, but the price is not always friendly on the wallet. The “Duvet” single is no exception: if you really want it, be prepared to shell out 2,500 yen (just over $20).

This particular releases comes via a label called Cinema-Kan, who specialize in movie and TV records.

View all posts by Matt Schley
Get a Look at These Vespa-Inspired FLCL Sneakers
Don’t Miss the Last Chance to See Never-Ending Man: Hayao Miyazaki in Theaters!