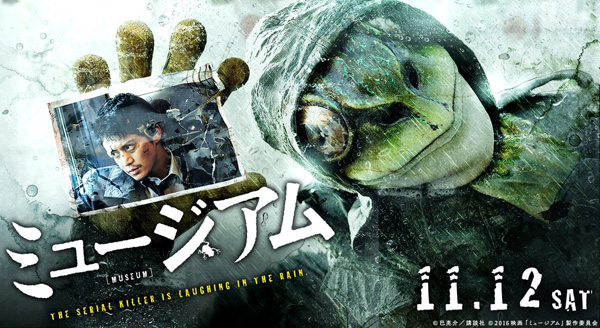 Museum follows a similar pattern to The Abominable Dr. Phibes (or for those of you born after 1971, Seven) in which a serial killer who picks out unique ways of killing his victims based on what he perceives as their sins – a man with a wife and mistress is cut in two, for instance, a half of his body shipped to each woman with a note attached reading “double love punishment.”

Why is this madman killing folks off? The police discover all the victims were either lay judges or jury members on the same court case that sentenced a man to death.

This is Museum‘s twist on the serial killer idea (the title itself is a bit of a red herring, explained away rather anti-climactically near the end of the film). The lay judge system was introduced to Japan in 2009, and has been contentious since its implementation, particularly when members of the public are forced to decide life-or-death cases. 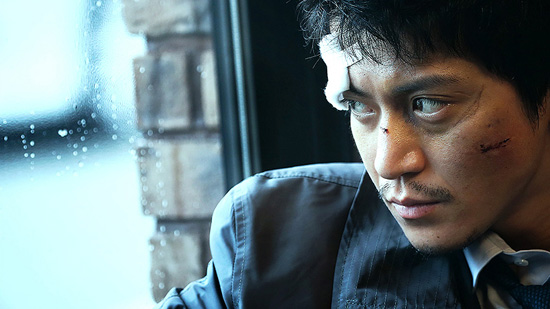 The hard-boiled detective on the case is Hisashi Sawamura, played in a piece of spectacular miscasting by Shun Oguri. The 33-year-old actor, who you may recognize from Crows Zero, Space Brothers or the live-action Lupin III, looks about a decade younger, making his tired, burnt-out Sawamura look like, well, an act.

In a twist of fate, it turns out detective Sawamura’s estranged wife was also on the jury in question, so according to police protocol, he’s taken off the case, forced instead to listlessly prowl police headquarters, howling in frustration and knocking documents off desks. This does not please scowling boss Yutaka Matsushige (who, to be fair, has no other facial expression).

Despite the best efforts of the police, the killer is able to capture Sawamura’s wife and son (and kill his partner), and the film switches into vigilante cop mode as Oguri goes off on his own to catch the killer, avenge his partner and save his family. The final act finds him in a bind, caught in the killer’s lair and forced to complete puzzles that are, literally, jigsaw puzzles (no Saw-like levels of complexity here, folks).

Keishi Otomo, the director of Museum, helmed the live-action Rurouni Kenshin films, which got progressively better as they went on, meaning Museum 2 or 3 might be great if they ever exist. As this one stands, though, Otomo directs with all the enthusiasm and skill of an above-average television director. One of the best parts of the Kenshin films were their well-choreographed, kinetic action sequences – but Museum‘s big action set piece, a car chase on the outskirts of Tokyo, is shot and cut like, again, something out of a TV show (and we’re not talking HBO here).

The first half of the film is essentially a police procedural, and despite some questionable detective work, procedural is the right word – it proceeds. 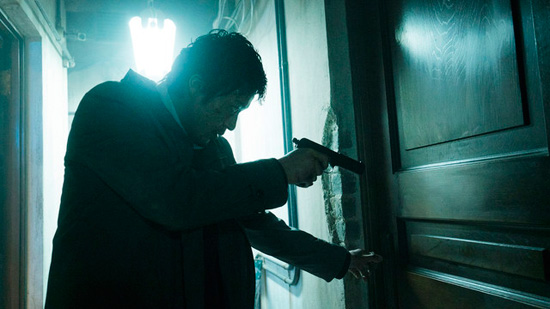 But Museum really lost me in the second half, in which the frog-masked killer, played by Satoshi Tsumabuki (Fast and the Furious: Tokyo Drift) reveals himself, trying his best to convince us he’s a scary guy. This mostly involves yelling, jumping around his dirty, blood-stained lair (surely the room of a brilliant, methodical mass murderer would be a bit cleaner?), cackling, and licking things not meant to be licked.

Why are cinema’s most iconic serial killers – I’m thinking Hannibal Lecter, Psycho’s Norman Bates, or Seven’s John Doe – so frightening? There is no jumping up and down the walls for these killers – they appear calm, rational and human – until the moment they don’t. For a seeming rational human being to perform an irrational, heinous act is far more frightening than a character whose inhumanity is never in question. The failure to key in on this makes the live-action Museum feel more like a comic book than the comic book on which it’s based.

Museum’s serial killer is quite inventive in the punishments he doles out to his victims, but viewers of the film suffer something much more banal: the dreaded “mediocre 132-minute movie punishment.”

Matt Schley is OUSA’s Man in Japan and edits e-News, that cool email you get from us every few days. Send him a tweet.