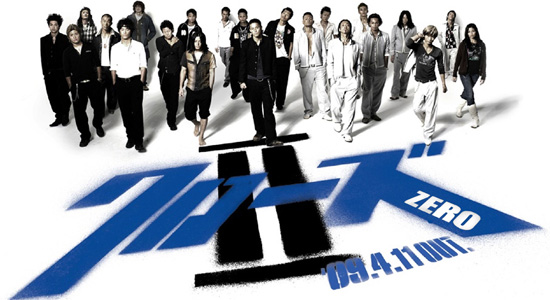 Crows Zero II is but part of the Crows x Worst universe of tough-guy delinquent fight manga, a footnote to a sprawling high school soap opera of rivalries, beatdowns, and true bro-dom. I’m not too proud to say that I was lost. Luckily for me, I was accompanied by the only Crows fan in the theater. Unluckily for me, she was also lost.

This movie is a sequel to the movie Crows Zero (both films were helmed by the perpetually busy cult favorite Takashi Miike), which is a prequel to the Crows manga. A prequel sequel, if that makes any sense. The relevant events of the first film are taken care of over the opening credits, but once you’re (kind of) up to speed the film throws out even more sneering, violent young men and plotlines which don’t necessarily go anywhere in this film, giving off the distinct feeling that we’re in the thick of a story entirely too long to summarize in two hours.

We certainly feel like we’re in a delinquent fight manga. Suzuran High is cartoonishly run down and ruled entirely by the fist: one of many similar sight gags indicates that the delinquent gangs even sell the toilet paper in the restrooms for 100 yen per centimeter. The schoolyards look like they came out of the cartoon post-apocalypse, and graffiti of Fist of the North Star’s Raoh (“I have no regrets in my existence!”) graces the chalkboards. 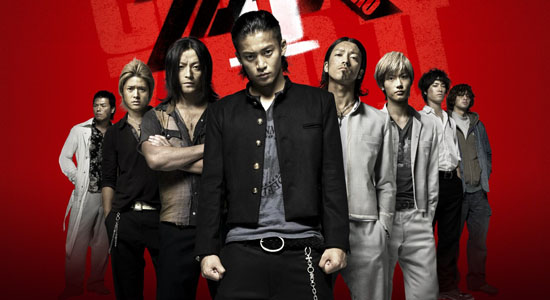 The students themselves are just as over-the-top: whether they’re dressed up like ’50s bikers or ’90s gangbangers, these guys are full-on badass caricatures who don’t speak so much as growl at each other for the duration of the film. It’s understood that every man at these schools is a soldier in some alpha dog’s army, like the protagonist’s GPS—that’s Genji Perfect Succession, and yes, I had to Google it.

Speaking of this guy Genji, he’s the movie’s biggest problem. He’s supposed to be the big dog at Suzuran, but I don’t believe I’ve ever had to suffer through watching a wussier juvenile delinquent. We spend the first half of the movie watching him sulk passively as everything important in the story takes place around him. Genji doesn’t appear to be a tortured guy, nor even under the sway of some kind of temporary emotional trauma. He simply does nothing but mope, refusing all his friends’ offers to go kick some ass (and his girlfriend’s offer of sex, for that matter) just because. As the first hour wore on and on—and the film cut away where it could to spend time with more interesting characters—I found myself wanting to go delinquent and headbutt this unbearable pretty boy in the nose. 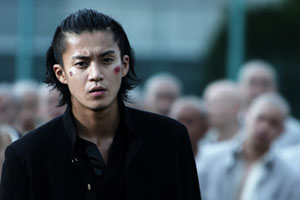 Thankfully, once the film hits its second half, Miike (by the way, fans of the director’s quirk will find little to chew on in this very mainstream action flick) is able to turn over the movie completely to the manga-stylized bare-knuckle violence that already peppered the first half of the film. I didn’t time exactly how long the storming and conquest of Hosen Academy went on for, but it certainly felt like half an hour. Think school uniforms dyed red with blood, faces beaten beyond recognition, and punch-drunk men charging into each other screaming, bloodied fists swinging. It’s blockbuster guy-movie spectacle, and being a man myself, it’s a damn pleasure to watch.

The world these guys inhabit is bloody, but it’s weirdly pure. It’s a place where no holds are barred, but pulling a blade is the ultimate sin (“A man fights with his hands!”). In Crows, when you beat your rival to within an inch of his life, you still look him in the eye as he passes out and double-thump your fist on your chest to show respect. At the end, the unrecognizably battered and bruised delinquents hobble home victorious on shaking legs, some slumped over half-conscious on a friend’s shoulder, others lighting congratulatory smokes for each other. They’re frolicking in slow motion, in that familiar, violent, and sentimental playground of boys’ manga. It wouldn’t be a bad place to live.