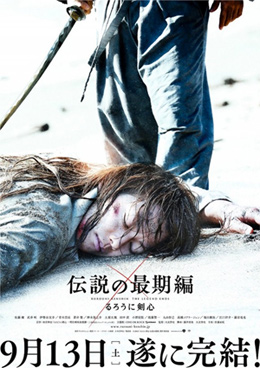 Rurouni Kenshin: Kyoto’s Inferno, the sequel to the live-action film based on the popular swordfighting manga, had an impressive weekend at the box office, opening at number one and having the biggest opening for a live-action film in Japan this year.

Kyoto’s Inferno, which we reviewed favorably this week, earned about $8 million in three days.

At this rate, the sequel is expected to outperform the original, which earned a total of $36.7 million in Japan. The third film, The Legend Ends, which concludes the “Kyoto arc” story, is set to open September 13th. A poster for the film was released Wednesday.

Coming in at number two this weekend was the Hollywood-produced Godzilla film. When Marnie Was There came in in fourth place. It has so far earned $15.5 million: by no means a failure, but nor a smashing success. Marnie‘s performance is one factor in Studio Ghibli’s decision this week to step back and reevaluate its future.