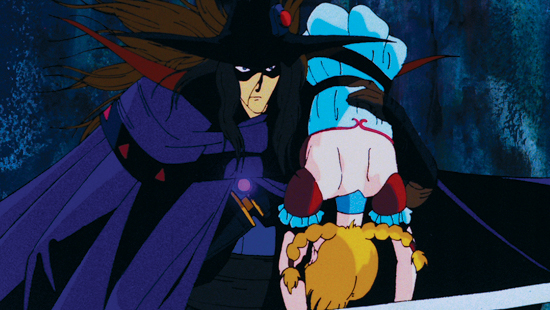 Few anime define an era, but for the early 1990s generation Vampire Hunter D embodied what “anime” was. In a time before DVDs or general awareness of the word “Internet,” before most people even knew of words like “anime” or “otaku,” one look was all anyone needed to realize this wasn’t like other cartoons. This “Japanimation” stuff was dangerous: stuff you’d watch while hoping your parents didn’t catch you.

But that was long ago. Nowadays we can actually see anime in the original Japanese with English subtitles. We know now that Vampire Hunter D is adapted from a light novel by Hideyuki Kikuchi, a series that continues to this day. About half are available in English care of Dark Horse and Digital Manga Publishing, which has also released full manga adaptations of the novels. 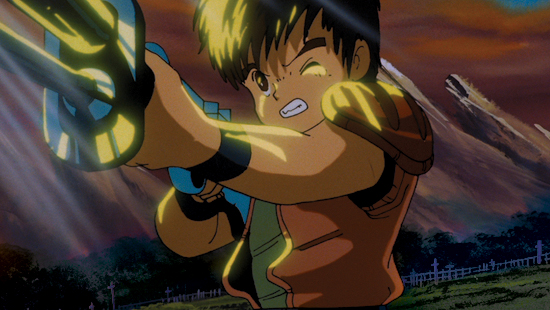 Yoshitaka Amano is now a globally recognized artist thanks to Final Fantasy, and it’s clear where VHD’s visuals diverge from his original illustrations in favor of the easier-to-animate visual stylings of its director, the late Toyoo Ashida of Fist of the North Star fame (who actually inserted D into a crowd shot of his FotNS movie!). That combined with the direct-to-video budget makes this outing look its age far more so than its theatrical sequel, 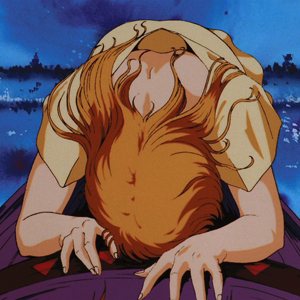 Vampire Hunter D: Bloodlust. The aesthetic and general perception of “anime” has shifted greatly since this anime came out, but that’s exactly why its power endures: once again, it’s simply not what you’re used to despite the structural familiarity.

Several millennia in the future, long after the nuclear/biochemical holocaust, humanity has regressed into a sort of “medieval Wild West” existence. Count Magnus Lee, clearly patterned after Christopher Lee’s Dracula, is an ancient member of “the Nobility” whose vampire abilities mean that few may oppose the Nobility as they prey upon humanity.

As the film’s memorable opening shows us, the Count’s latest victim is Doris, a young huntress equipped with a fancy whip and laser rifle whose skirt is so short that she’s flashing her panties whenever she’s not topless. Fortunately for her, a mysterious and taciturn hunter known only as “D” rides into town on his cyborg horse. D knows how to save Doris from her looming fate as the Count’s latest bride: kill the vampire that bit her to lift the curse. Easier said than done, as the Count resides within a castle stronghold that is home to a menagerie of mutants and monstrous servants. 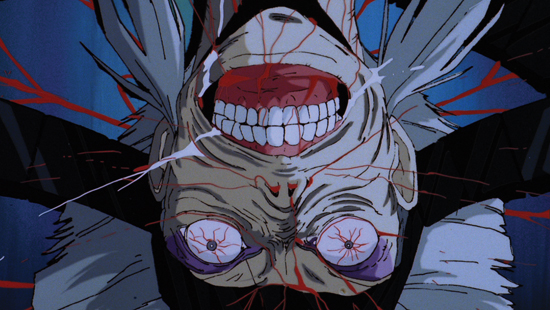 But these idiots have no idea with whom they are messing. D carries one big curved longsword, and what’s more he’s got freaky powers of his own due to being a dhampir [half-vampire] himself. Does any of this remind you of Castlevania? Well, let’s just say that’s not an accident. On top of this, his left hand has a face and mind of its own: a talkative symbiote [Migi …?], the better to keep D himself mysterious while providing someone who can explain to us what’s going on. What’s going on is that some mother … suckers are always trying to ice skate uphill. 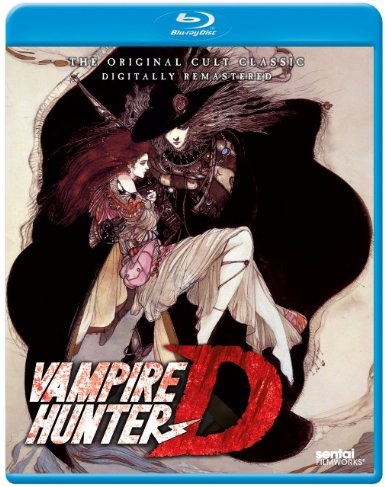 Vampire Hunter D was initially released dub-only in the US by Streamline Pictures, and while I always loved studio Intersound’s performances, the scripts they were given weren’t exactly high on accuracy. Sentai Filmworks has omitted that in favor of a contemporary and more accurate dub of their own, but many who would own this on Blu-ray do so out of nostalgic pining to recapture their childhood experience. Ideally, they’d have offered multiple dub tracks, but the second I was able to experience this film in the original Japanese starring the dearly departed Kaneto Shiozawa as D, I never bothered with any English version ever again. Forget nostalgia! This is BETTER.