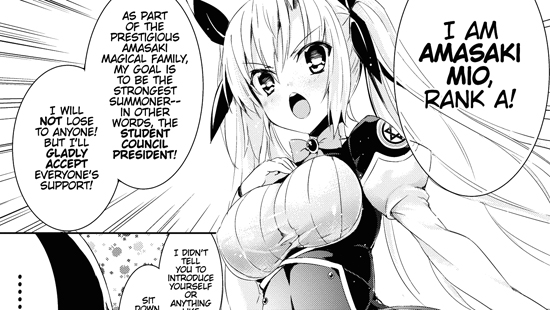 Hayashizaki Kanae, otherwise known as “Storm Cat,” is a master swordsman, and her adopted brother Kazuki also wants to become a swordsman at the National Knight Academy. However, due to the “Enigma” symbol that appeared on his hand, Kazuki must enter the Magika school and obtain a contract with a Diva (aka god or demon of the “Seventy-Two Pillars of Solomon”) to become a summoner. Kanae, who has a more than sisterly affection for her adopted brother, is upset about being separated from Kazuki, but she’ll have to content herself with crushing on him from the opposite site of campus.

Up until now summoners have been all girls, probably because the “Décolleté Oblique” magical armor granted by their Divas is so scanty and titillating. (It may even surpass the armor of Kill la Kill in scantiness, and that’s saying something!) Kazuki, however, is just that unlucky—or lucky, depending on your perspective. As the only male student in the Magika school, Kazuki will just have work all that much harder to prove himself. 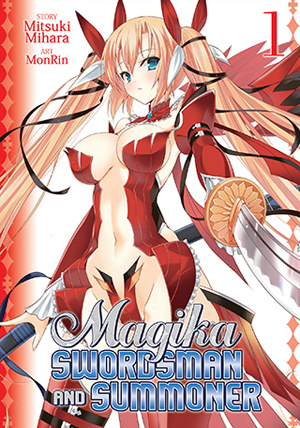 Magika Swordsman and Summoner is a harem manga of the tallest order. After Kazuki summons his Diva Leme for the first time, he discovers that she has the power to control the Divas of all of the other students and access their powers. But to do so, Kazuki must make the Diva’s (female) summoner fall for him. Kazuki, noble soul that he is, doesn’t think this is fair to the female students, but oh well. He must gain their love to save the world, after all. “You’re meant to be ‘The Harem King,’” says Leme, “not ‘The Friend Zone King.’”

Although this is based on a light novel, it’s practically begging to be a dating game or a dirty dream. Or both. Kazuki’s “Décolleté Oblique” turns out to be a ring that tracks the affection levels of the girls around him so that he knows whether his actions cause them to like him more—or not. So whether it’s cooking, cleaning, or dueling that makes those girlish hearts go pitter-patter, Kazuki will have to do it, all the while ogling boobs, thighs, crotches, nipples, and butts. He may also wonder why female anatomy changes size and proportion so often, but if he does, he’s not admitting it.