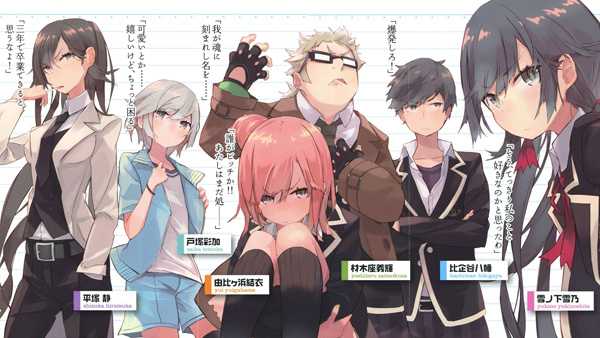 Hachiman Higaya is a misanthrope, a brooding loner who has nothing but contempt for the “normies” and “monkeys” he sees flirting and having fun in the school quad every lunch hour. “Go die in a fire, you normies!” he writes in an essay, prompting the school to send him to the guidance counselor, manga’s archetypal vaguely sketchy, hot, female teacher somewhere in her late 20s. “This reads like the prelude to a school massacre,” she tells him, puffing away on a cigarette. (Cigarettes in school: sketchy.)

Shizuka, the counselor, sentences Hachiman to a strange punishment: he must join a two-person “club” with Yukino Yukinoshita, a beautiful, haughty, straight-A student who’s also alienated from society in her own way. The two of them sit silently and awkwardly in a room together, Yukinoshita ignoring Hachiman and reading a book while Hachiman spaces out into his own fantasies (“This setup is kinda rom-com-ish,” he thinks.) Shizuka assigns them the task of solving the problems of any student who comes through the door.

It seems unlikely anyone would go to Hachiman for advice, but before too long a girl comes in with their first assignment, helping her make homemade cookies for a boy she likes. Their next client is a nerdy boy who’s obsessed with fantasy worlds and wants someone to read his light novel and give him honest feedback. (My Youth Romantic Comedy is based on a light novel, and things get self-referential here: “The important part is the illustrations,” Hachiman tells the kid.)

A bit like No Matter How I Look at It, It’s You Guys’ Fault I’m Not Popular! (which started in the same year in Japan), My Youth Romantic Comedy tries to show the “warts and all” side of nerd culture—bitter, angry nerds who shun normal folks and can’t perform 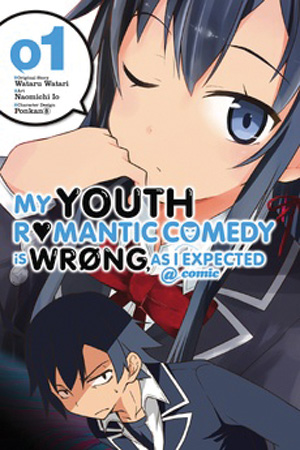 basic social tasks. Sadly (if sadly realistic for some parts of male nerdddom) Hachiman is more misogynistic than the heroine of No Matter, calling girls “sluts” to their faces; also unlike the genuinely pitiably inept Tomoko in No Matter, author Watari tries to convince us that Hachiman is actually a genius and despite his grouchy exterior is able to solve people’s problems, like a teenage Dr. House.

As usual for light novel adaptations, the manga is overly text heavy and full of Japanese pop culture in jokes, although Hachiman’s misanthropic observations are occasionally interesting and read like they were straight from an angry introvert’s school notebook. Still, by the end of Volume 1 Hachiman has girls who like him as well as a cute little sister, making it impossible to sustain the title’s fiction that this series is about exploding tropes rather than piling them on. Cynicism about manga clichés is the new manga cliché.