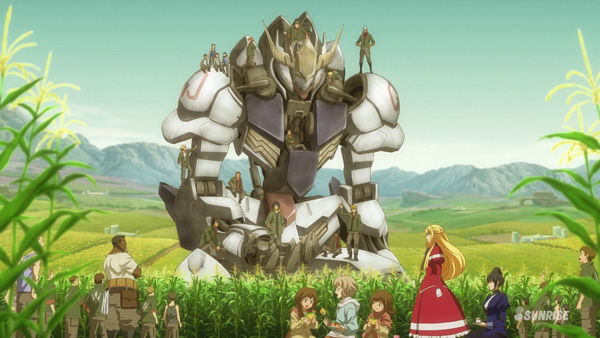 The following phrase is not one I’ve bothered saying for the last decade: the new Mobile Suit Gundam TV series is actually rather enjoyable so far!

Iron-Blooded Orphans is an “alternate-universe” Gundam series, which means it’s set completely stand-alone from any other anime with Gundam in the title and requires no prior knowledge to watch. Mars was colonized by humanity centuries ago, but with no economic autonomy a movement for Martian independence has started to gain traction. But gone are national armies, replaced instead with Gjallarhorn: a military oligarchy overseeing all governments, whose leaders are dedicated to preserving the centuries-standing status quo. 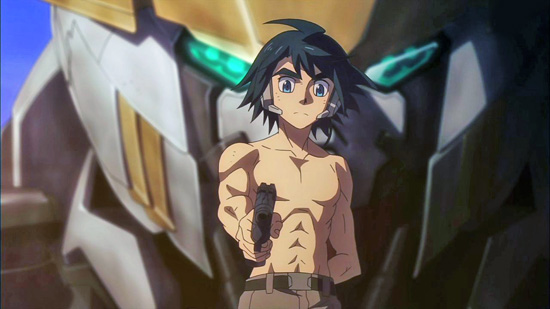 The well-being of non-Earthlings is of little concern, and so power on the frontier rests with corporations, crime syndicates, and mercenary bands (aka “private military contractors”). Trafficking and slavery run rampant, and one such use for this endless supply of human labor is as child soldiers. Given spinal implants named after the Buddhist concept of Alaya-Vijnana, in the rare event they even survive the procedure such children are capable of piloting heavy machinery by virtue of interfacing with them directly through their nervous systems.

Young, wealthy, and idealistic Kudelia Aina Bernstein is the face of Martian independence, and as her capture or death is beneficial to Gjallarhorn and other oppositional forces, she enlists an armed security escort to accompany her on a voyage to Earth to meet with heads of state. But do you see the title of this series? The child soldiers of the “private security forces” she hires revolt and take over. Declaring themselves the Tekkadan (Iron Flower), the barely pubescent family of expendables takes it upon themselves to finish the job they were hired for, on their own terms. 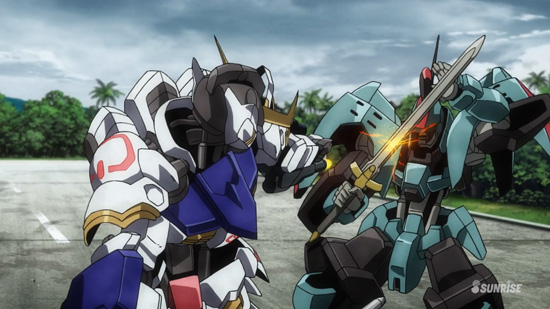 Gundams in Iron-Blooded Orphans are relics of a long-gone cataclysm. Seventy-two possible Gundam robots exist, each named after one of the Goetian demons. Naturally, the Tekkadan have located and restored one of them: Barbatos. As of this writing, only a few others have been encountered, and thanks to their armor plating only Barbatos sports the iconic “Gundam head” look. A Gundam needs a pilot, and that’s where the diminutive Mikazuki Augus comes in. We’ve certainly seen young robot pilots aplenty in anime, but Mika really does come off as a “kid” because he thinks absolutely nothing of killing people without any hesitation or reflection.

That he’s one of a company of seasoned killers who can’t initially read or write puts their lighthearted scenes in a different context. Mika leaves all the thinking to his (brief thus far) lifelong friend: Orga Itsuka, the de facto leader of Tekkadan who’s almost certainly in over his head, but had better well hide it. Still, perhaps the greatest (or worst) character is Naze Turbine—now THAT is a Gundam character name!—a Genya-esque gangster whose crew consists entirely of his multitude of robot-piloting wives (and children he’s sired). 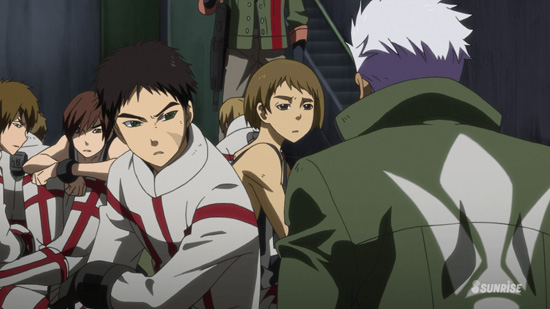 Gundam SEED Destiny and 00 focused on continual “surprises”; a soap opera-style, logically thin legacy that continues in other Sunrise mecha series such as Code Geass or Cross Ange. But Iron-Blooded Orphans is from writer Mari Okada and director Tatsuyuki Nagai, who notably worked together on the relatively grounded and measured Anohana as well as The Anthem of the Heart, and a similar approach is applied here… for the moment.

Ever since Gundam 00, Sunrise has adopted the practice of “split cours”: having the staff create the first half of a series before doing half of an entirely different series, then returning to finish up the original series’ second half instead of just doing it all at once. Changes are implemented in these interims that give the second seasons drastically different tones compared to the first. It remains to be seen whether Iron-Blooded Orphans will fall victim to this, though early warning signs are visible. Stop info-dumping character backstories right before you kill them off because you forgot to gradually dish it out beforehand, anime writers!

[Review] Tomodachi x Monster
[Review] Of the Red, the Light, and the Ayakashi