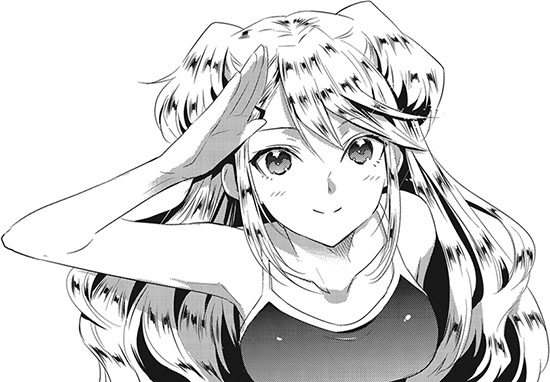 “It’s so corny it hurts! It hurts soo baaad!” Yes. Yes it does. Those words are shrieked out by Yoshimatsu Hotaka, the main character of Evergreen, but it may describe readers’ reactions as well.

Hotaka is a skinny sad-sack suffering from a congenital heart defect. He moans about his life, whines about his father who died from the same heart condition, and laments that he’ll never get to befriend golden summer goddess Awaya Niki. Every day he stares out the window of the manga club and watches her swim practice. It’s as creepy as it sounds. At last Hotaka gets the chance to meet Awaya when she saves him from embarrassment poolside. The manga meanders on, throwing out a few plot turns and hints that Awaya has feelings for Hotaka she’s been hiding.

There also seems to be other things going on in Awaya’s life that the manga doesn’t delve into in the first volume. But between the fact that so little is revealed about her (except for the fanservice color spread of her in the shower on page one), and that Hotaka 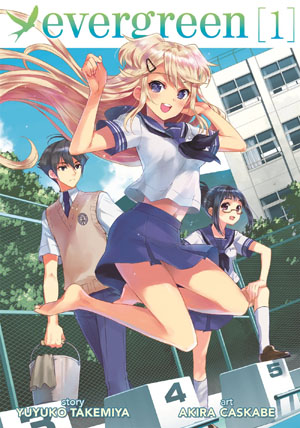 is so insufferable a main character, there’s nothing compelling enough to recommend picking up the first volume, let alone Volume 2.

The art is pretty, like a modern, polished riff on Hiroyuki Utatane: clean lines, lots of pretty girls, standard backgrounds. One look at the cover and you’ll know what to expect. (Less artistic effort is spent on the male characters than the girls; one of Hotaka’s friends looks just like him but with lighter hair.)

Still, pretty just doesn’t cut it, not when forced to slog through 180 pages of Hotaka’s pity party. He’s such a drag that he pulls the entire comic down with him. Even the side characters are walking clichés done better in other manga. Slow moving and agonizingly clichéd, Evergreen amounts to a collection of high school manga tropes checked off one after the other, and done better elsewhere.