It’s a terrible cliché, but films like Redline don’t come around very often. The popularity of sci-fi anime films seems to have died out with the rise of digital animation, but while Redline succeeds in appealing to old-school fans, it has plenty to offer newer fans as well. Takeshi Koike’s film has been in production for years, and it’s been rumored to have been completed over budget and way behind schedule. While that might not sit well with the financers, the result is a startlingly refreshing film with fantastic production values and plenty of science fiction credibility.

Blending Western sci-fi tropes with Japanese style, Redline focuses on the outlaw racers who take part in an annual, anything-goes car race held throughout the galaxy. Keep in mind these aren’t regular cars; some bristle with weapons, some can go under water, and one can transform into a well-endowed robot. The film wears its Eastern and Western sci-fi influences on its sleeve, but manages to create something entirely new, if slightly familiar, and never comes across as unoriginal. 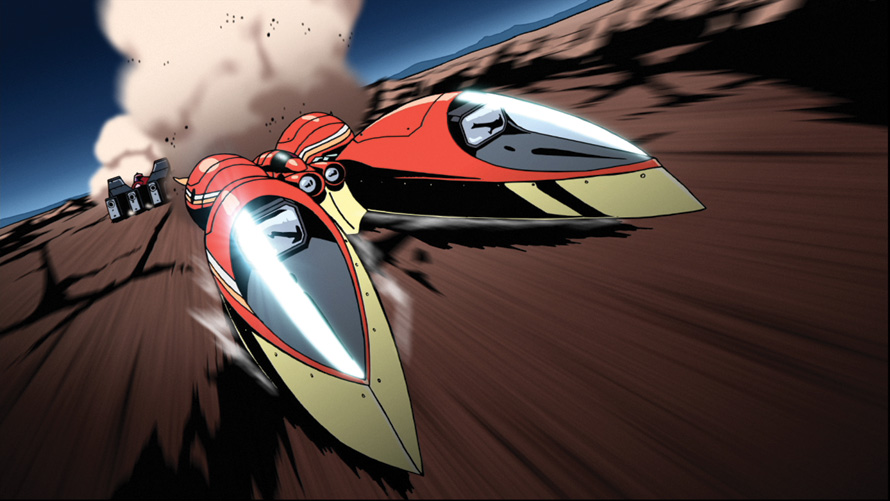 While the main focus is the hyper-kinetic race in the third act, it’s worth pointing out all the details and characterization between the racing segments, because those really make the film stand out as well rounded. Even for those who aren’t petrol heads, there’s lots to enjoy: jaw-droppingly gorgeous animation and a visual style unlike anything else in anime today.

Redline often ignores the laws of physics and throws logic out the window, but you won’t complain because it’s just too much fun. Easily one of the most visceral and exciting films to come out of the Japanese animation industry in the last decade, Redline is worth seeing in the cinema, and heartily recommended to all fans of the medium.

This article originally ran in the Import Report column of the February 2011 issue of Otaku USA Magazine. Today, Redline is streaming for free on Youtube, and you can read our full feature about it here.