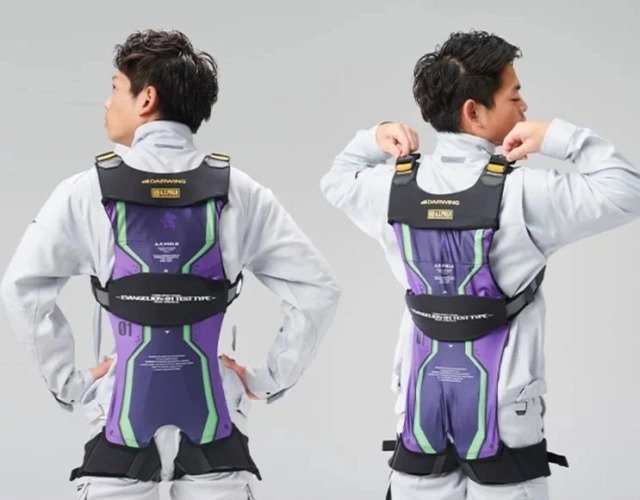 It’s never fun to hurt your back, and there are plenty of supplies out there meant to help keep your back in good shape during heavy lifting. But how many of those things are also catered to otaku? That’s what makes the A.T. Field Darwing Hakobelude Light Eva Test Type Model so unique and cool.

Any fans of Evangelion will instantly recognize that the color patterns are reminiscent of Shinji Ikari’s Evangelion Unit-01. You can strap it right onto your body, and adjust the strap as needed to make it looser or tighter. It will keep your core braced and help you avoid pulling muscles.

Production credit goes to Daiya, which is a medical supply company in Okayama Prefecture, Japan. The designers did their research by talking with construction workers, nurses, agricultural workers, and others in jobs where a harness like this could be helpful.

One of the requests from these workers was that the harness not be heavy. So the finished Evangelion harness weighs just under a pound and a half.

Pre-orders have begun, and the harness will start shipping next month. Though it doesn’t weigh much, it does come with a hefty price tag: 82,500 yen, which is about $610.

GKIDS is releasing the Evangelion franchise in America, and gave this description for Neon Genesis Evangelion, the TV anime that started it all:

“Created by Hideaki ANNO, the NEON GENESIS EVANGELION television series is one of the most influential animated series of all time. Since its 1995 premiere in Japan, the story of teenager Shinji Ikari has emerged as one of the most iconic titles in animation history and a global pop culture phenomenon.

A formative title in the animation canon, NEON GENESIS EVANGELION demonstrated the ability of animation to tell stories of philosophy, and intellectual and emotional characters, unlike anything that had been seen before in animation on a global scale.”