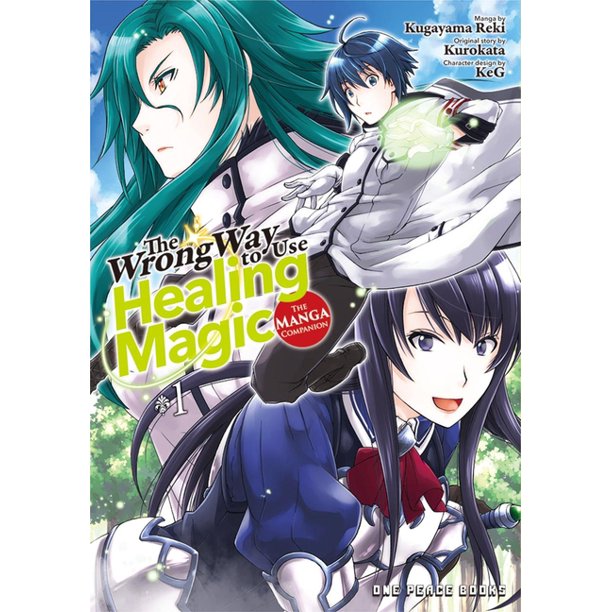 The Wrong Way to Use Healing Magic is a manga based on a light novel series. It opens with high schooler Usato, who thinks his life is boring. Well, it’s about to get a lot less boring. He’s hanging out with the school’s council president and vice president (and very aware of how insignificant he is compared to them) when the three of them are suddenly sucked into another world.

The new world looks like a Medieval European fantasy place, and the king informs them that they’re fighting the Demon Lord. The three high schoolers were summoned as heroes to help in the fight. And they’re stuck here, because there’s no known way back to modern Japan.

But wait, why is Usato here? He’s boring and useless. He’s not smart and talented like the other two high schoolers. It must be a mistake.

But it turns out Usato does have skills . . . very rare, healing skills.

He soon finds himself being trained by Rose, a sadistic and over-the-top drill sergeant type. She’s a fun character in the story, and she makes Usato do all sorts of back-breaking and outrageous training until he gets abs of steel.

The first volume in the manga is mostly about character introductions and there are hints about dark things happening in the past. We meet other healers, some animal companions, and the people of the kingdom. We also get to meet some of the demon characters.

The parts that hint at a dark background are very interesting, because you want to know what happened. There’s nothing mind-blowing in the first volume, but it’s setting itself up like it might have a really deep, strong plot. It has serious moments, though it also indulges quite a bit in comedy, especially dealing with Usato and Rose’s strange relationship.

This is a good manga for fans of the isekai genre. One Peace Books is also releasing the original light novel series, so if you enjoy one part of the franchise, you ought to check out the other. The first volume of the light novel series came out this week. There’s also going to be an anime adaptation down the line.

The Wrong Way to Use Healing Magic 2