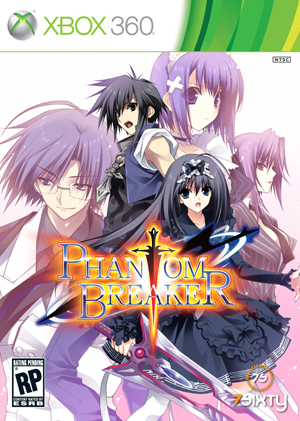 As if to atone for the mixed bag of last year’s fighting game movies, 2012 is being bombarded with tons of new fighting games. Seriously, look at the list of things released/to be released this year: Soul Calibur V, Street Fighter X Tekken, Tekken Tag Tournament 2, the King of Fighters XIII arcade update, and the highly-anticipated Skullgirls. In the background of this onslaught, there are other lesser-known games entering the ring. Type-Moon’s Melty Blood: Actress Again Current Code came out with Carnival Phantasm’s third season on Blu-Ray; Sega’s been teasing a game known as Chaos Code since last year; and the reason we’re here today, 7Sixty got its hands on the license for a North American release of the 2D fighting game Phantom Breaker.

Right off the bat there are four reasons you should care about Phantom Breaker. First off, for all those intimidated by long combo input strings, it’s a simple 2D fighting game. Much like the aforementioned Melty Blood, it’s a four button layout with only Low, Medium, and High attacks along with your character’s Special Attack. In this simplicity, however, lies the fun of the game; Using the Over Drive mode, your attacks have a chance of canceling your opponent’s, giving you a chance to turn the tide. Second, if you’re a fan of the visual novel/anime series Chaos;Head, main heroine Rimi Sakihata guest stars as a playable character. Third, if you also dug Steins;Gate, Kurisu is ALSO a playable character, complete with strange gadgets and attack sets for your amusement. And lastly, the factor that’s worth the price of admission, the voice actor of Kamen Rider Decade’s Decadriver belt is the game announcer. It’s like that awkward moment when you realized that the announcer in the Fullmetal Alchemist: Brotherhood commercial breaks was also in Street Fighter IV all over again.

Before writing this review, I’d discussed Phantom Breaker with a friend of mine. Being a hardcore fighting game fan, he’d tried the demo via the Japanese Xbox Game Marketplace… and wasn’t impressed. I can totally understand the turn-offs of the game, though, the main deal-breaker being the modern anime art style. (Though this leaves me scratching my head as to why this gets a wag of the finger while King of Fighters and Melty Blood get off scott-free.) But muscling past that particular gag reflex, the real problem with him seemed to be Phantom Breaker’s simplicity. It’s because you aren’t doing ridiculous input strings like those in other fighting games, instead solely utilizing the directional pad and the Special Attack Button for your moves. I will be the first to admit that if you’re coming in from the likes of Street Fighter, at first you’ll feel like you’re stepping over yourself adjusting to the new system. And while the learning curve isn’t that jarring, it comes into conflict with the natural reflex that occurs when one picks up a new game. Because face it, the first thing people do on Day 1 is try out the Dragon Punch or Fireball motions; those inputs are practically universal, serving as a foundation for the learning curve. If some semblance of it isn’t there, the transition is a bit harder. (Case in point: Going from the 2D side-scrolling Street Fighter to the free-moving 3D Tekken series.) 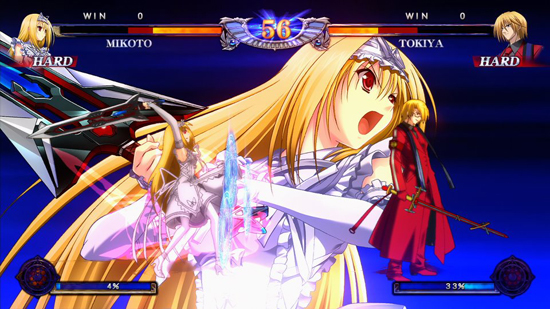 But in spite of the lacking commonality, the game that Phantom Breaker does share a similarity to? The Sega Saturn/PC Engine classic Asuka 120%. (Do yourself a favor and look into this series. Then shed a tear that we’ll never get a next-gen port.) On the surface, the Asuka games come off as a stereotypical anime fighter, complete with an all-female cast fulfilling each possible high school cliche. But when you really put them through their paces, they become something all their own. See, Phantom Breaker isn’t aiming to be the Next Big Thing with dreams of global conquest, but it is far from being the Worst Fighter Ever. (That honor is reserved for Dragon Ball GT: Final Bout.) This is the game you look for when you’ve got a Saturday night with a bunch of friends in the living room and you want a change of pace. And if you do give it some time, it’ll be a fun, exciting way to hack away at people with bishounen wizards and schoolgirl ninjas.

And besides, you’ll need something to play while Capcom sits on the DLC for Street Fighter X Tekken, right?

PHANTOM BREAKER is set to be released for XBOX 360 this April, but you can try out the game first-hand at Anime Matsuri from April 6-8th. For more info , head over to https://animematsuri.com/

Simulation Romance App My Forged Wedding Comes to the U.S.
On The Shelf – March 14, 2012