Back to the future …10 years from now

Nearly a decade ago, I said were I forced to name just one title that represented the best that anime had to offer, I would probably pick Mobile Police Patlabor and lamented it being years out of print. Since then, things have changed. Right now, every animated incarnation of Patlabor is legally available to view online in English, and it’s all available on Blu-ray in the US. Along with being sold separately, we now have the option to get all of it in this Ultimate Collection: the original direct-to-video OVA series, the entire television show along with the second OVA series, the three theatrical films, and the weird little “Mini-Pato” shorts.

Rather than being set on a distant planet or future per the norms of 80s/90s sci-fi anime, Patlabor was set “10 years from now” in Tokyo; the exciting future year of 1998 or so, in which giant robots are real but mobile phones and the Internet aren’t really a thing. Here, the primary purpose for robots is for construction, and thus the robots are called “Labors.” That doesn’t mean Labors can’t be used for nefarious deeds, and so the Tokyo Metropolitan Police sets up a special unit of Patrol Labors, or “Patlabors” for short…

…but that’s just the setting; is it still the best overall representative of what anime offers? Certainly, some aspects have aged better than others. Maybe it isn’t as funny now to see a short-tempered cop whose first response is to draw his giant robot revolver and begin blasting away, never receiving any punishment?

Or for some of the villains to be militant environmentalists? It doesn’t bother me personally, as Patlabor overall is a far more optimistic future than the “all the uncool aspects of cyberpunk” one we live in. Despite all the anime made since, Patlabor remains virtually uncontested as far as its genre versatility. The theatrical films look better than ever before and are tensely paced procedural mysteries or political dramas: to this day Patlabor 2 remains in the conversation for “best anime film of all time.” For maximum emotional impact, I recommend watching the second film as the very last thing in the entire collection, as “the end.” The third film made years later by a different staff was originally not intended to be a Patlabor film at all, which is why the established cast only briefly cameos.

The television series is less visually impressive and somewhat formulaic since it’s rather solidly entrenched in the action-comedy side of things, but the OVAs are the most wide-ranging. Some parody kaiju/tokusatsu films, while others are surrealist fantasy. There’s a spoof on the Japanese student protests of the 1960s, as embodied by mechanics waging war over whether they can keep dirty magazines in the work area. There’s one where half of it is just two people talking in a car. All of it works, because the characters remain consistent whether they’re participating in a subterranean D&D-style dungeon crawl or foiling a genius from orchestrating a coup d’état.

It may not be a phenomenon like My Hero Academia or Attack on Titan, but thanks to streaming and being in-print on home video, a new generation of anime fans are discovering Patlabor and realizing that it still has merit, roughly 30 years later. In 2016, the final (to date) Japan Animator Expo short Mobile Police Patlabor: Reboot showed us a “10 years from now” future as extrapolated from our digitally connected modern world, featuring an entirely new cast. It was quite well received even among those who had never heard of Patlabor before, and so a new series, Patlabor EZY, was recently announced as forthcoming. Considering the Reboot short was animated by Studio Khara, hopefully we won’t have to wait for their fourth Rebuild of Evangelion movie to come out first. Though a trailer was just released, the existence of Evangelion 3.0+1.0 is a work of fiction … but in 10 years, who knows? 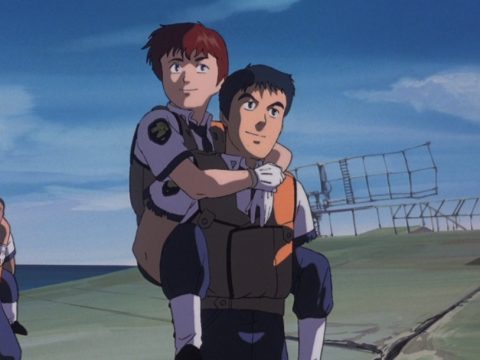 Patlabor 30th Anniversary Exhibit Makes Its Way to Another Location