It’s not easy to assess an entire year after the fact, but we do what we can here at Otaku USA. We presented a handful of our contributors with a hefty challenge: Pick ONE standout anime from the entire year, whether it be theatrical, televised, or something else entirely. Even with the ability to list runners-up, this is no small order, so see what some of our writers thought of the year in anime below!

Titles include both anime that debuted in 2012, and anime made commercially available in 2012. 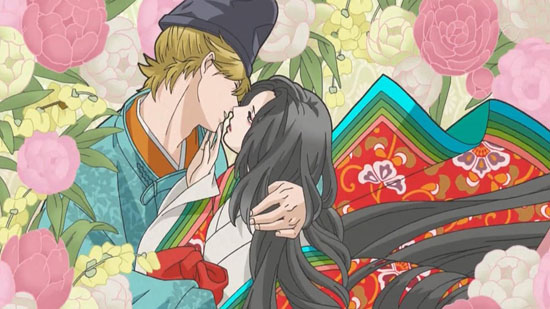 Andrew Feindt – Chōyaku Hyakunin Isshu: Uta Koi
There were many excellent titles out in 2012, and picking just one is not an easy task. Based on what I could watch over and over again, I’d have to say Chōyaku Hyakunin Isshu: Uta Koi was the hands-down winner. It loosely interprets the classic poems of the Ogura Hyakunin Isshu with a powerful blend of beauty, humor, and humanity. Likewise, runners up would be Kids on the Slope, Space Brothers, Chihayafuru, and Natsuyuki Rendezvous. Lupin III: The Woman Called Fujiko Mine and Mysterious Girlfriend X are also high on my list for their art and storytelling elements. 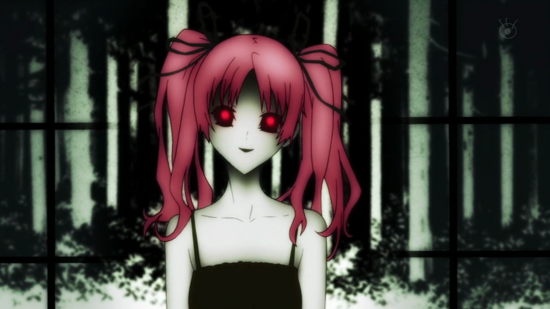 Danica Davidson – Shiki
Of all the 2012 anime I saw, Shiki was the one that stuck in my mind the most. I know it’s unusual to pick a horror title in many “Best Of” lists, but it affected me more than any other titles from the year. It starts out seeming like a solid, creepy horror story that should just be for fun… and then it gets a heart. Things get twisted all around so it becomes much more complex than it seems at first, with a strong “What is good and what is bad?” enigma for viewers to think over. Don’t be surprised to find your allegiance to characters shifting while you watch.

Daryl Surat – AKB0048
It’s nearly impossible for me to pick a top anime of 2012. There was so much good stuff… and there is so much disagreement. Even I change my mind every few minutes. What’s more, I simply haven’t watched enough. There are highly praised movies without US releases scheduled like 009 Re: Cyborg, Wolf Children Ame and Yuki, or One Piece Film: Z which I have yet to see. Titles such as Space Brothers are ongoing through 2013, so who’s to say whether they’ll maintain their quality? Just how representative of “2012” are semi-modernized beat-for-beat adaptations of specific stories dating back several years, be they classic anime/manga such as JoJo’s Bizarre Adventure and Space Battleship Yamato 2199 or light/visual novels like Fate/Zero? Only part of Chihayafuru aired in 2012, and while Lupin III: The Woman Called Fujiko Mine was great, the animation quality wasn’t quite what one would expect from a Sayo Yamamoto/Takeshi Koike project. Puella Magi Madoka Magica is frequently cited as the show of the year, but will it be remembered if we were to look back on the year 2012 a decade from now? I’m not so sure. Talked about as it is, I think people will forget about Sword Art Online really fast once it’s over. Does Polar Bear Cafe leave any sort of lasting impression?

Perhaps no single anime series better encapsulates the phrase “anime in 2012” better than AKB0048. Wait, what? Did I just write that? The show from Shoji “Macross” Kawamori which is a promotional tool for the idol singer group AKB48? Yeah. Color me surprised, too. (Maybe I should wait another few minutes for my mind to change.) I figured they’d fizzle out and fade away pretty fast as Japanese musical acts tend to do, but these gals have been topping the charts for years now and have reached media super-saturation status. The anime’s a grand scale space opera version of the movie Footloose (or if you prefer, the video game Revolution X), where music is forbidden because MUSIC… IS THE WEAPON. As far as “the state of anime in 2012,” AKB0048 covers the bases. Cutesy girls of varying proportions with guns and lightsaber microphones, giant robots causing giant explosions, a flamboyantly gay dance choreographer, space marines (because WHY NOT), insane fan characters (the key to quality shows about music bands), a top-notch animation budget, comically outlandish plotting and characterization, a bunch of music and voicework from the actual band… and, oh yeah, no US license or legal streaming option BECAUSE of said involvement from the actual band. Truly, AKB0048 is the spiritual successor to Macross Frontier. The sequel is currently underway… and so far, it’s just as stupendously ridiculous as before. 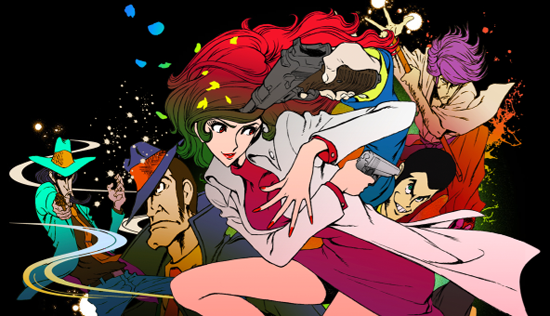 Erin Finnegan – Lupin III: The Woman Called Fujiko Mine
My top anime pick of 2012 is Lupin III: The Woman Called Fujiko Mine, a shocker beating out Kids on the Slope and Space Brothers. Fujiko Mine has a twist ending thick enough to write two or three grad student thesis papers. The animation style is the most innovative of any 2012 series, haters be damned. In a year of reboots and re-tellings, Fujiko offers a great new twist on old favorite characters, including a darker, “bad cop” version of Inspector Zenigata.

Paul Thomas Chapman – Lupin III: The Woman Called Fujiko Mine
My top pick for 2012 would have to be Lupin III – The Woman Called Fujiko Mine. It’s the only show I bothered to follow on simulcast as it was coming out, and in a male-dominated industry, it’s nice to see Sayo Yamamoto get a chance to helm a major property. Plus it was a fresh, mature take on a franchise that’s been around in some form for over forty years, and it was able to breath new life into classic characters. 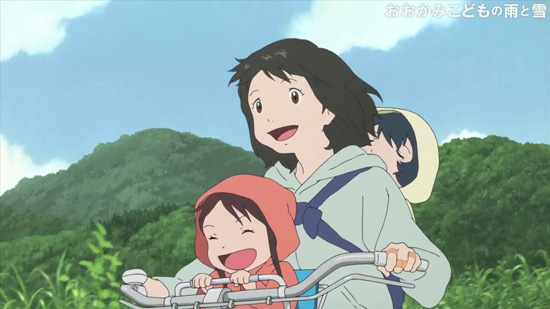 Matt Schley – The Wolf Children Ame and Yuki
Mamoru Hosoda took a step back from his dozen-plus character bonanza Summer Wars to make this gentler, more intimate and ultimately better film. Ostensibly about two siblings who are half-human, half-wolf and the mother doing her best to raise them, Wolf Children is really a universal story about growing up weird. Hosoda continues to shine, and I’m looking forward to whatever comes next. 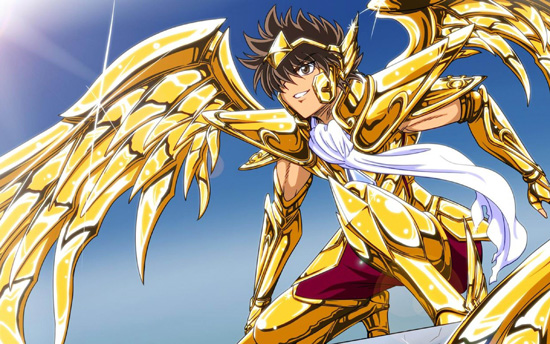 I could easily have picked another anime as my shining Top Pick. For many reasons, 2012 was just a great year in anime. Saint Seiya Omega does not have the strong story-telling of other series, it does not have the most beautiful character designs, and it doesn’t have the thickest plot in the bunch, but what it does have… is Cosmo. It’s the characters’ tension of possible failure, it’s the wave-crashing power of youth that attracts me to any anime series, and Saint Seiya is based on JUST THAT. Unlike our original heroes, the budding Saints of Saint Seiya Omega have motivations other than defending Athena, some of them merely know her as a concept, let alone a living Goddess.

To enjoy this series, you really have to let go of your beliefs and deep-seated assumptions about what the Seiya universe is like according to Kurumada’s original manga and anime series, because other than the re-use of names and themes, you aren’t going to get exactly what you want. This makes SSO extremely charming in its own way, it’s brought an entire new generation of fans into the Seiya universe! The characters are updated to reflect the current stereotype of bishounen (no more muscles). Everybody is sleek and slender, which is awesome.

BUT, the thing that really sealed the deal for me was the flashbacks of our beloved Saints from the ’80s. Other than the reintroduction of Pegasus Fantasy as the OP, that was the best thing to happen for this series.

Joseph Luster – JoJo’s Bizarre Adventure
I wrote a great deal about why I love the 2012 anime adaptation of Hirohiko Araki’s sprawling JoJo’s Bizarre Adventure series in a previous article, and it’s stuck with me throughout the whole process of reflecting on the year. To put it simply, I just didn’t have as much fun with anything else that came out this year. JoJo‘s is so unabashedly over the top, and it soars despite David Productions’ rather anemic budget. It makes up for in style what it lacks in animation.

There were plenty of other shows I adored this year, though, and the close-but-not-quite runners-up include Kids on the Slope, Hunter x Hunter, and Lupin III: The Woman Called Fujiko Mine, which was a real stunner through and through.