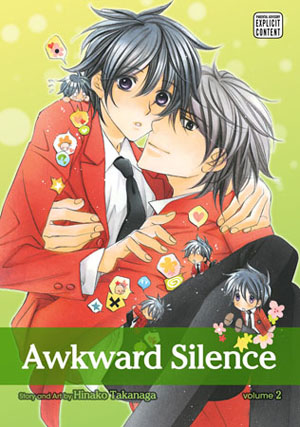 Happy (belated) Halloween! Another perfect night for reading manga, whether you’re passing the time between trick-or-treaters at your door, trying to scare your own pants off or simply wind down from a great big sugar rush after you get home.

Unfortunately there isn’t a lot in terms of treats from manga publishers this final week of the month. Specifically, there are only two treats. We’re going to see numbers a lot higher than that in the next few weeks but for now, while there may only be two, they’re still both well worth a read.

SuBLime offers up the second printed volume of Hinako Takanaga’s Awkward Silence. I’m really eager for this one, both as a fan of the creator and someone who just honestly loved the first book. It follows a young man named Satoru who isn’t capable of expressing emotion normally. While those around him see only muted facial shifts and sparse speech, readers are privy to his more honest feelings through an assortment of inner monologues and cute expressive doodles representing them. In the first volume we got to see Satoru start dating the object of his affection, a talented baseball player and fellow student, Keigo.

In book two, Satoru has an opportunity to show actions speak louder than words when he sneaks into Keigo’s baseball training camp. Keigo may not be free because of his mandatory training, but that won’t stop his boyfriend from telling him something important. What could it be? Romantically over-dramatic I’m guessing, but everyone can be a sucker for that sometimes, right? Like nearly all of SuBLime’s releases, you can purchase this book digitally as well, or simply utilize their online viewer to read a preview of the volume.

The second new book out this week is the third volume of Flowers of Evil from Vertical Inc. It continues a somewhat deranged and thus entirely intriguing story about a boy named Takao Kasuga who is blackmailed by a classmate for a mistake he made involving the girl he likes and her gym outfit. In volume three, it seems things might be looking up for Takao as he gets an opportunity to not only continuing dating the girl he likes, but be accepted by his peers. Too good to be true? Oh, most definitely. 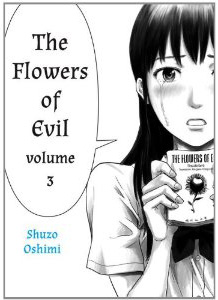 If you haven’t read the first two volumes, Otaku USA’s reviews by Joseph Luster paint the picture all too clearly: “…no matter how many beams of happiness shine down from the heavens on Kasuga, we all become the prescient fortune tellers who know it can’t end well.”