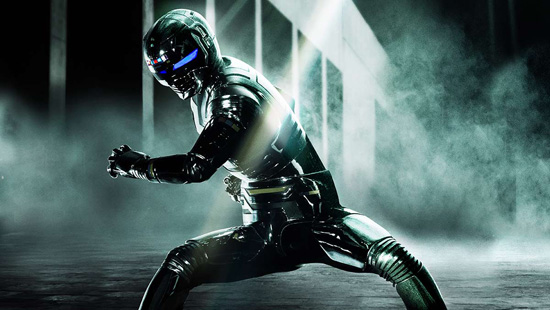 Tokusatsu is, if anything, a genre of extremes. At its best, it’s basically live-action anime as the 12-year-old boy in us remembers it, full of cool vehicles, explosions, and gratuitously convoluted storylines full of cool-sounding buzzwords that boil down to a simple framework. At its worst, one cold still gets cool suits. It’s not so nice when the extremes are “awake” and “asleep.”

Space Sheriff Gavan: The Movie is the 30th anniversary resurrection of the 1982 TV series of the same name. I have to admit I haven’t watched the original series outside of the first episode (with apologies to resident tokusatsu expert Mike Dent as he winces in pain), but things in this film open promisingly enough. A young Itsuki (Yukari Taki) flashes back to good times with her childhood friends, Touya (Takuya Nagaoka) and Geki (Yuma Ishigaki), who both happened to be declared lost in the same space accident. Memories of good times are cut short though by an evil alien baddy literally tearing holes and giving the office a fresh red coating. After witnessing the increasingly sanitized Kamen Rider series, the inclusion of actual blood, let alone actual blood in the first five minutes of the movie, brought hopes up. 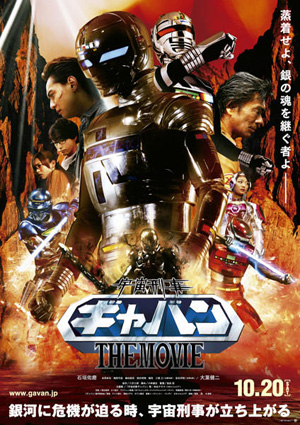 Then our heroine Itsuki is, of course, saved at the last minute by a man in a sweet metallic suit – Gavan, our titular hero! With the decidedly retro music, the use of smash-zooms and highlighting action with repetitive cuts, it would be easy to think that the rest will be a non-stop assault of throwback awesome, especially coming on the heels of his well-received split-billing with Gokaiger earlier this year. It would be easy – but it would also be dead wrong.

Sadly, after the strong opening, the film gets bogged down in the particulars of its drama. That’s not to say that it’s all terrible – on paper, at least. Basically, it turns out that Gavan is none other than Geki, who was miraculously saved from his accident, unbeknownst to everyone, by the Space Police. However, he is actually merely training to be the successor to Gavan – heroic enough to be given a reluctant permission to use the name, but not man enough to truly own it.

With the evil alien threat of Don Horror, thought to have been destroyed in the original, back again to wreck havoc with his recreated Space Mafia, Geki has to prove himself worthy. Fortunately, the true Gavan, Retsu Ichijouji (Kenji Ohba, reprising his role from the original), has got his back. Unfortunately, between this sandwich of reasonable coming-of-age tale and hardcore action, you have to slog through a literal snooze-fest of hackneyed “childhood friend” J-drama.

With ticket prices exceeding $20 to just get permission to sit your keister on a seat to watch a movie, it takes a special kind of cinematic chloroform to make one decide that a trip to the sandman is worth more than the potential of watching a superman kick ass. And that’s the problem with the first half of the film – there just isn’t enough actually happening to maintain interest. The real identity of Don Horror, despite the pitiful attempts to play it as a mystery, is obvious to anyone who was paying attention to my pithy plot summary in the  previous paragraph.  It’s nice that director Osamu Kaneda tried to give the action some emotional resonance, but resorting to cliches resulted in tears of boredom, not ones of empathy. 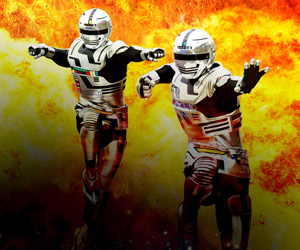 Fortunately, once Kenji Ohba enters the picture, the film gains a sudden new lease on life. He literally knocks sense into everything and, at the risk of spoilers, the film becomes actually fun to watch as both Gavans, old and new, are made to work together against the forces of Don Horror’s Space Mafia (man, that’s so cool to write out – I love tokusatsu). The scene is played for laughs, but they are laughs that genuinely work. Ohba and Ishigaki come across a father and son who have finally found their bond in a love of delivering righteous justice, and seeing their interplay will bring a smile to all but the most cynical of souls. One could argue about the internal logic of Retsu saying, “it’s been thirty years since I’ve done this,” but it’s a truly soulful moment in a movie that too often tries to shoehorn them in, and be damned if anyone is going to argue with it.

So, is Gavan The Movie worth watching? The first episode of the Gavan TV series featured no less than a space station getting worked over, a city being bombarded by weird, creepy-as-hell aliens, dog fights with said aliens, bad guys with machetes getting those machetes thrown back at them and yes, Gavan’s sweet metal suit kicking ass. Those new to the franchise would probably be best advised to just go straight to the TV show to get the goods in a much more efficient and meaty package. Those old fans looking to see Retsu yell “LAZER BLADE” one more time might find something to see. Either way, be advised to keep your finger firmly over the fast-forward button.