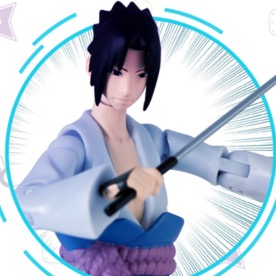 
The OMAKASE subscription service has a real treat lined up for Naruto fans in January 2016. That’s when

will debut as a follow-up to November’s excellent Kill la Kill box, and this one brings another slew of surprises along for the ride. The latest reveal is an exclusive limited edition Sasuke Uchiha action figure by Toynami.

Sasuke features over 25 points of articulation, so you’ll be able to put him in all the appropriately intense ninja poses you can pull from Masashi Kishimoto’s hit series. The limited Sasuke figure joins the previously-revealed exclusive Gold Naruto Mininja, and there’s still another mystery to be revealed before launch.

. The box is priced at $29 but has a value of $60+, and the promise of more items to come only sweetens an already bubbling pot.